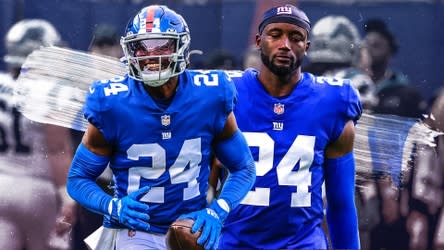 The draft has come and gone and James Bradberry is still on the Giants, which definitely was not part of GM Joe Schoen‘s original plan. He has been trying to trade the expensive cornerback almost since the day he got the job. And now it does not seem likely that he can.

What that means for the 28-year-old veteran isn’t exactly clear. But Schoen knows he has to figure this out sooner than later.

“I do not have a definitive answer on that right now,” Schoen said after the three-day draft was over. “But we are working towards some contingency plans.”

It still isn’t clear at all what those contingency plans are, but the most likely scenario still seems to be the Giants parting ways with Bradberry in some fashion because keeping his salary cap number of $ 21.8 million on the books is too difficult for his cap -troubled team. They currently have only about $ 6.2 million in space under the NFL cap and are expected to need approximately $ 12.6 million to sign all 11 picks in their draft class.

Add in money for a practice squad, perhaps a couple of late-spring veteran additions and then some injury replacements during the season, and the math says Bradberry’s cap number is just impossibly high. Trading him – which at this point would likely only be for a late-round pick in the 2023 draft – would clear $ 13.4 million off the Giants’ books, though they likely would have to offer to pay some of his salary in order to get another team to make an offer.

And honestly, at this point, it’s hard to even find a trading partner. Four teams took cornerbacks in the first round on Thursday, including the Kansas City Chiefs, who at one point appeared to have some interest in Bradberry. Five more teams took a corner in Round 2, covering just about every team that seemed to have a hole at that position.

That could make it more likely the Giants will have to cut Bradberry instead, which would clear about $ 11.4 million. And while that’s not something the Giants want to do, they are getting close to the point where they might have no choice.

But that’s complicated, too, because the Giants did not exactly find a replacement for Bradberry in the draft. The top two corners were gone by the time they made the fifth pick – including Cincinnati’s Ahmad “Sauce” Gardner, whom the Giants were eying until the Jets took him at four. They were also unable or unwilling to trade down in the first round, where they might have grabbed someone like Washington’s Trent McDuffie or Florida’s Kaiir Elamwho ended up going 21st and 23rd to the Chiefs and the Buffalo Bills.

Then, despite several opportunities, the Giants did not draft a corner until they got to their second third-round pick, 81st overall. That’s when they selected LSU’s Cor’Dale Greata 6-foot, 175-pounder who even the Giants know needs time to bulk up and get ready for a full-time role in the NFL.

“He has height, and he does have length,” Schoen said. “And again, the kid is 20 years old. So (he’s) still young, still developing.”

In other words, he’s not likely to be the Giants’ No. 1 or 2 cornerback this season, which means if they do get rid of Bradberry they are left with Adoree ‘Jackson and a group of untested young players, almost all of whom were drafted by the previous regime. That’s not exactly ideal given how important cornerbacks are in defensive coordinator Don “Wink” Martindale‘s scheme.

Schoen has mentioned several times that he has “contingency plans” that could potentially keep Bradberry on the roster. But unless he’s willing to restructure some of the biggest contracts on the team, like those of Leonard Williams or Kenny Golladay – something Schoen said was a “last resort” – it’s really hard to see how the finances could work out.

Perhaps the only way would be to sign Bradberry to a lucrative contract extension, structured with a low cap hit in the first year. But there have been no indications that any substantive talks have occurred. And it’s still unclear why Bradberry would be interested in doing that when he’d likely be better off forcing the Giants’ hand and hoping he can land a lucrative deal with some other team.

One thing that is clear, though, is this has to be resolved soon. The more significant part of the offseason program is beginning and Bradberry, obviously, is not attending. At some point the coaches need to know if they’ll have Bradberry as part of their defense or whether they’ll have to groom somebody else to replace him.

It’s a good bet that one way or another this will be resolved before the Giants’ minicamp in mid-June, which would also give Bradberry some time before training camp to latch on to another team.