What Is CAMM? Perhaps, the Future Look of Memory in Laptops 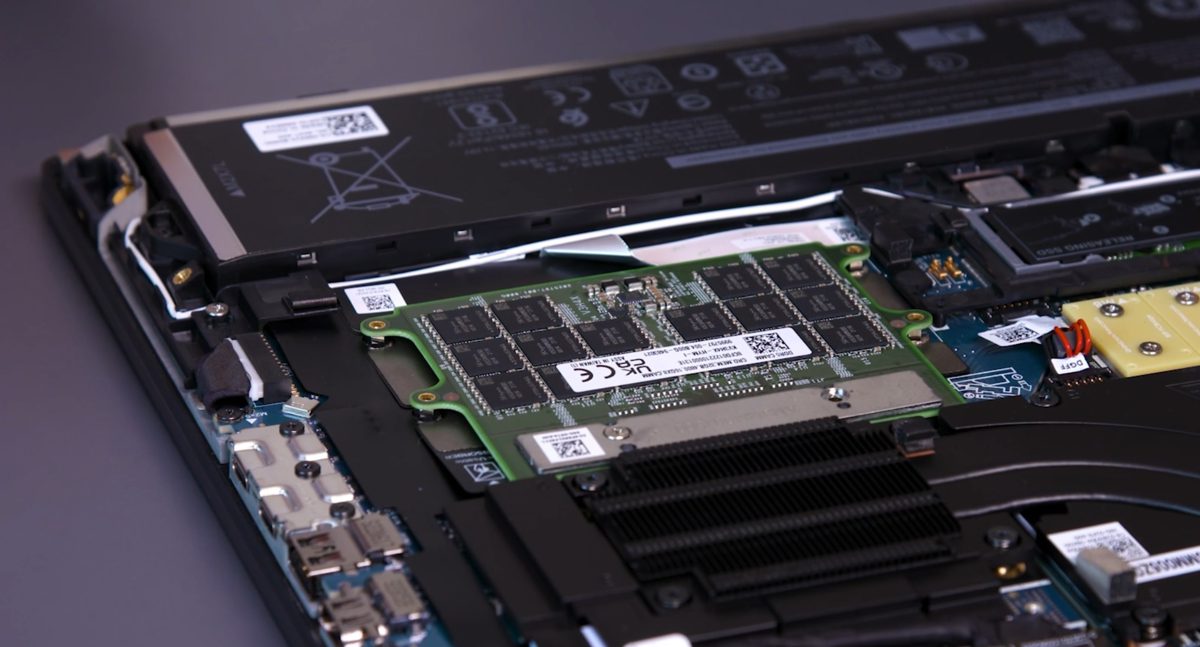 Dell’s homebrewed CAMM memory module is set to become the memory standard for laptops, over time replacing, in certain types of systems, the familiar long-running SO-DIMM.

As first reported by PCWorld, memory standards organization JEDEC has received unanimous approval of CAMM by the task group voting on its use. JEDEC has hundreds of members, but this specific group is made up of around 20 companies relevant to the space—primarily manufacturers and suppliers. They are committing to develop CAMM as a replacement for SO-DIMM that can be deployed in certain classes of laptops in the near future. The group is planning to finalize the 1.0 specification this year.

We looked at one of the first laptops outfitted with this memory, and we also spoke to Dell about CAMM and its future. Dell’s inaugural CAMM laptop is a Precision model, but that’s secondary to the memory. In the video above, we walk you through CAMM’s design and layout, so watch for lots of closeups of the new module and a rundown of its advantages. Below, we answer a series of questions you might have about CAMM.

First of All: What Does CAMM Stand For?

The literal answer here is Compression Attached Memory Module, but that probably doesn’t help too much. The real answer to what it’s all about? CAMM is a new standard for random access memory modules (usually just referred to as memory, or RAM) in laptops. 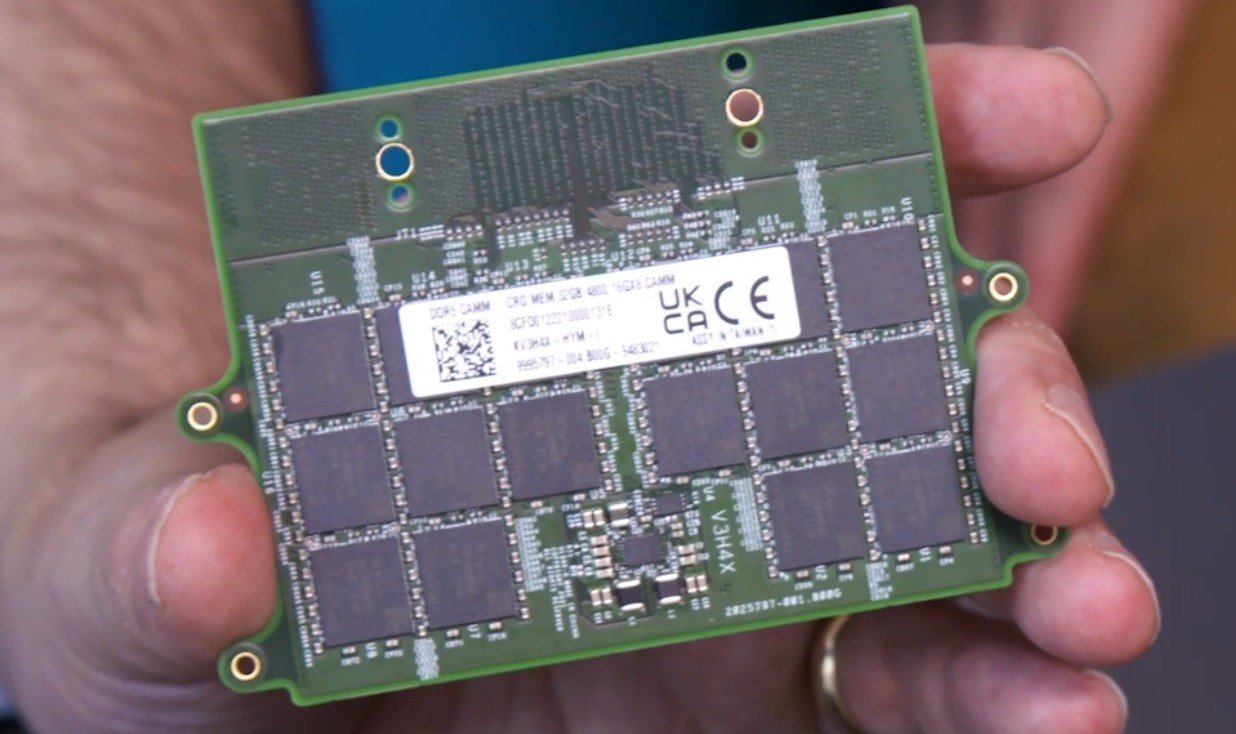 The “CAMM” acronym refers to the physical layout of the memory, and how it interfaces with the motherboard and other components in your laptop. This and others are referred to as “standards” because the PC industry has long agreed that, for everyone’s sake, it is much easier to develop laptops and components using the same universal core formats across manufacturers.

Who Is Behind CAMM?

As mentioned, the standards organization JEDEC has the final word on moving forward with CAMM in a wider sense, but that’s not where the technology originated. CAMM began at Dell, an in-house creation by Dell engineer Tom Schnell, to solve the shortcomings of the current memory form factor, SO-DIMM. 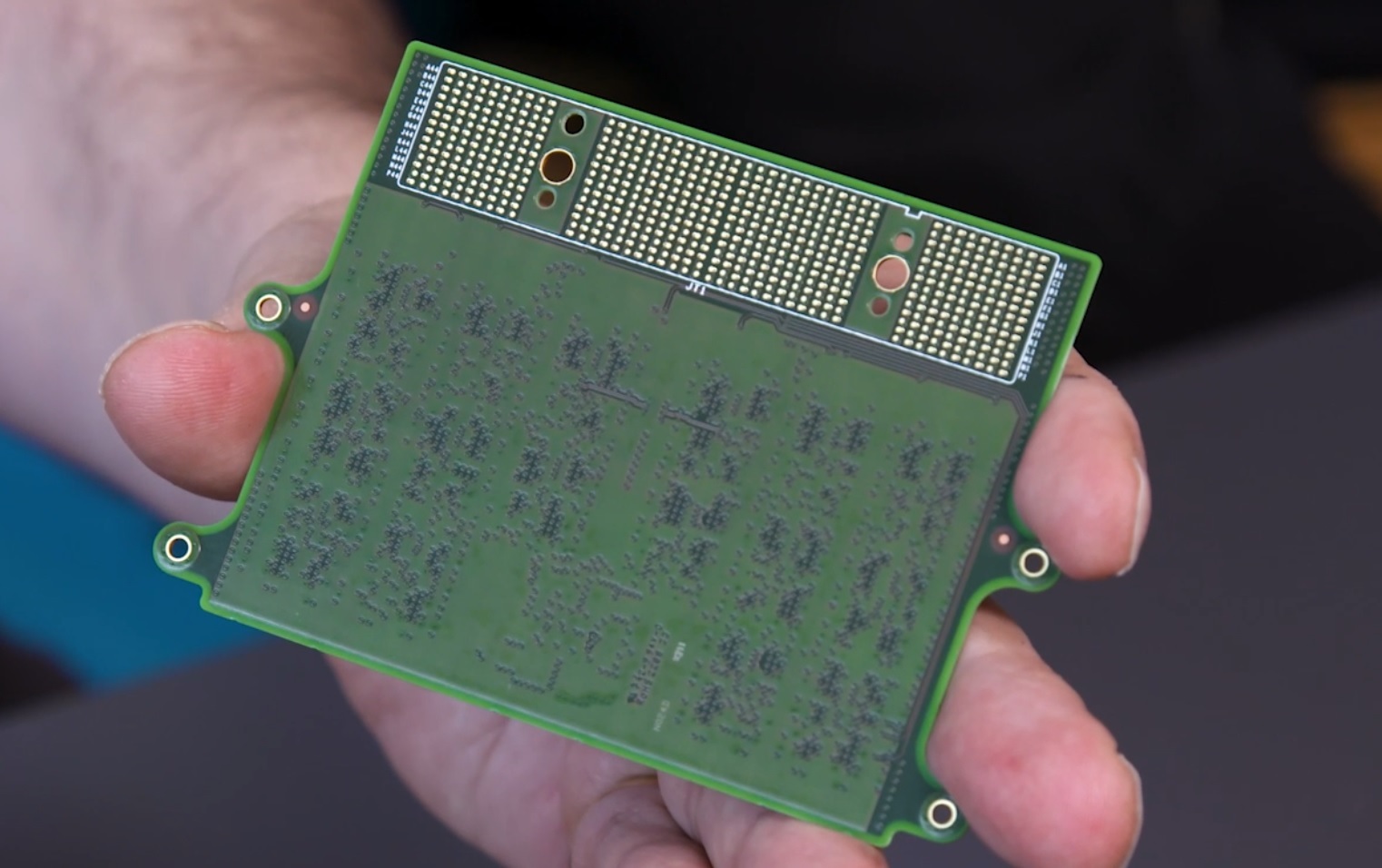 We spoke to Schnell recently in a private call to better understand how CAMM works, why it is needed, and its advantages. Dell does have a patent on the design and stands to gain from its use in that regard, but as the news indicates, the company’s priority is the proliferation of the module as a solution to SO-DIMM’s limitations. The PC maker is keen to allow others to use its technology and open it up as an industry standard.

What Problem Does CAMM Solve?

Laptops have used the SO-DIMM standard for decades, but it’s beginning to hit its performance ceiling. This chiefly concerns memory-speed limits as DDR memory gets increasingly speedy. In the near term, this problem will mostly apply to gaming and workstation laptops that are pushing for higher memory accesses. 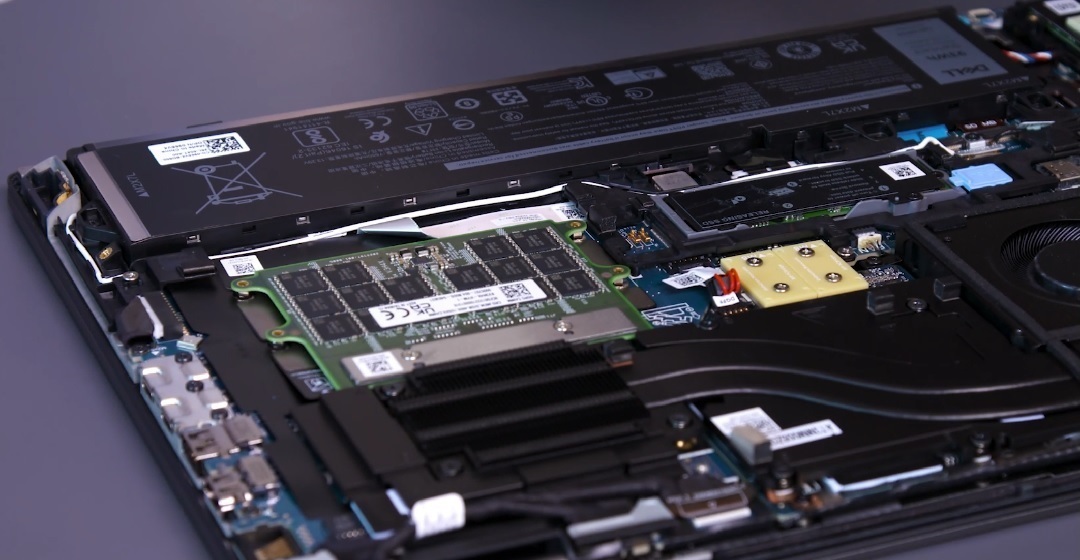 In particular, DDR memory speeds cap out at DDR5/6400—that’s 6,400MHz—with SO-DIMM. This limit is approaching quickly for high-end laptops, particularly with DDR6 memory on the horizon, even if the average consumer laptop has some time to hit this limit. Transitioning standards can take years, so the work—in the form of CAMM—is underway to get out ahead of it, and reset the clock, as it were, on top-end systems that will be the first to hit a speed limit. Not addressing the problem would be a waste of performance potential, in a world with blistering-fast CPUs and GPUs.

Facing that, CAMM aims to both improve peak possible speed and take up less space in laptop designs, beginning a new memory era with a much higher eventual performance ceiling. The key factor in accomplishing this is an entirely different design. A CAMM module may look bigger than your typical pair of DIMMs, but that is not the whole story.

How Does CAMM Work?

The secret is in the “compression-attached” part of the name. This slim module and its contacts are pressed against a bar that sits between it and the motherboard. This bar, or interposer, is laced on both sides with pins that interface with a stripe of contacts on the motherboard. 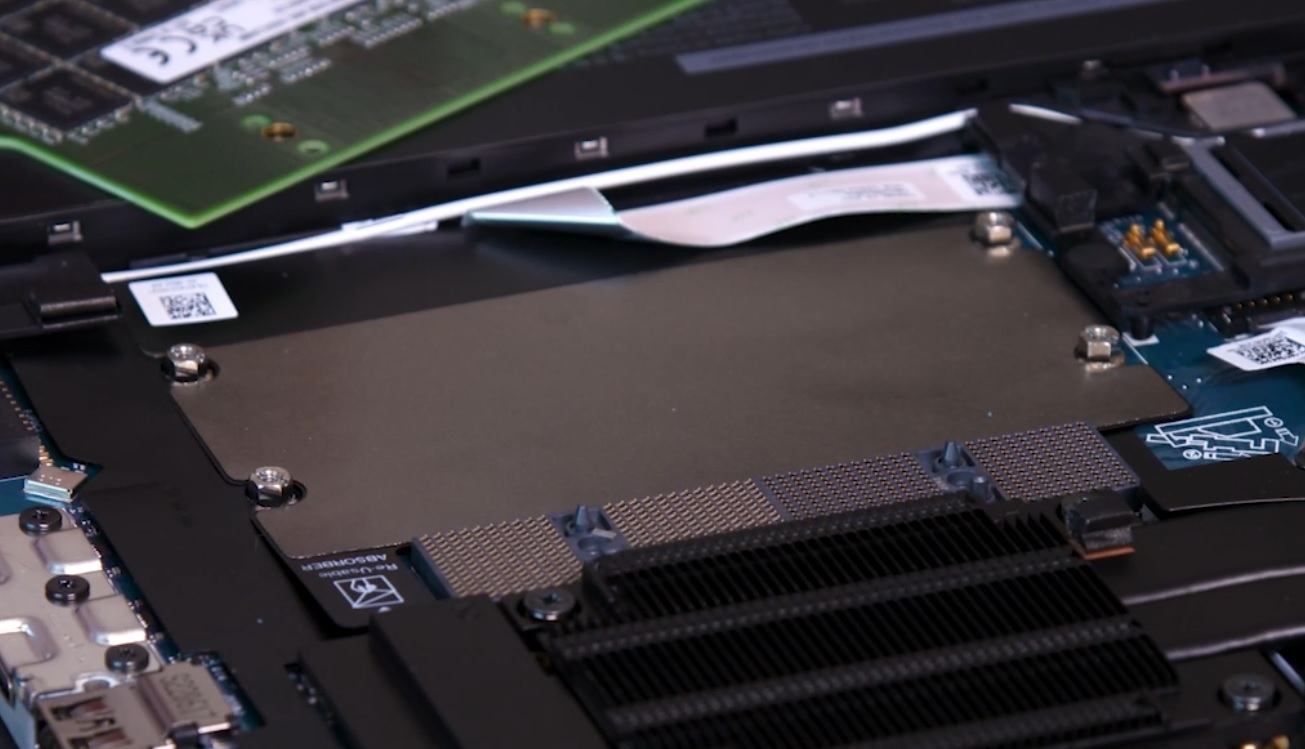 This design has a number of advantages. The flat, wide form factor results in a much lower Z-height than SO-DIMM. SO-DIMM modules are taller, especially when you stagger more than one, taking up crucial space that can be used for cooling or a different board layout. The contacts being compressed in a sandwich of sorts also means they are less exposed to open air than the semi-exposed contacts of SO-DIMM modules and sockets.

Speaking of the board layout, that’s where CAMM gets its speed advantage. Because of the design, the traces—which act as conduits on the mainboard for the RAM to communicate with the CPU—can be much shorter with CAMM compared to SO-DIMM. Shorter electrical paths require less power and can reach higher speeds, in addition to giving board space back to engineers. SO-DIMM traces between the memory and CPU can be up to 3 inches, but CAMM can cut the distance down to 1.5 inches. 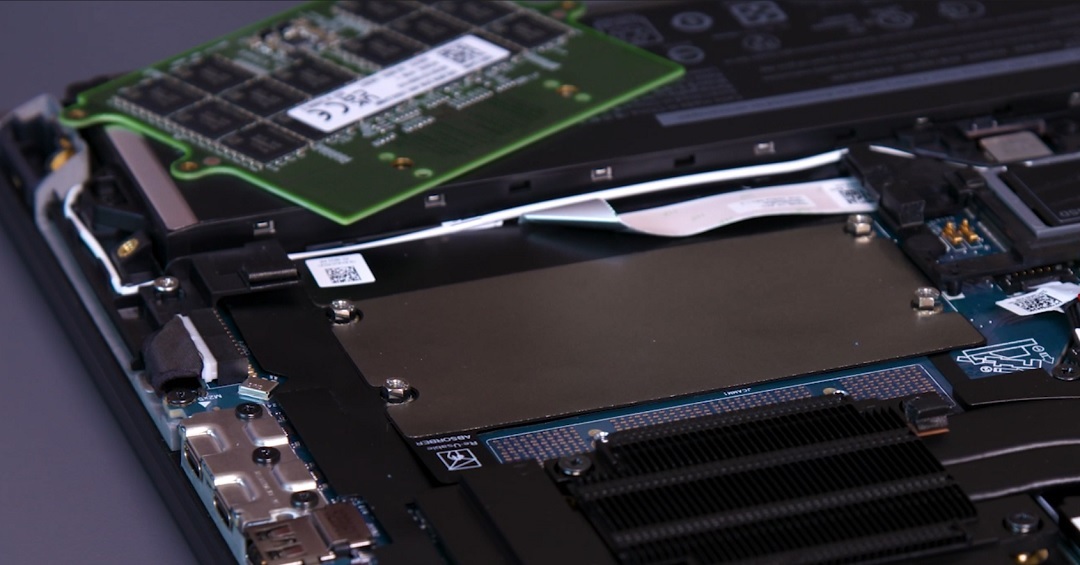 We should emphasize: CAMM isn’t going to take over overnight, nor will it make sense in every laptop and implementation. Fully expect a lengthy transition period, where both memory types may be available in the kinds of systems in which it makes sense for them: first, probably gaming laptops and mobile workstation laptops.

One CAMM workstation solution, from Dell, is this Precision 7670 model pictured throughout and in the video, which employs the interposer with CAMM. But at the factory, this Precision chassis can also, instead, take an SO-DIMM device in the CAMM module’s position to accept the older kind of memory within the same chassis/motherboard design. In this case, this would allow Dell to configure a laptop with either SO-DIMM or CAMM when customers order, without changing the laptop’s essential internal layout or maintaining two distinct models.

A few things to bear in mind with CAMM. First, in this first Dell Precision implementation, the CAMM module is a single piece, unlike the dual-module design you usually see with SO-DIMMs. Given the footprint of CAMM, expect to see it implemented as single modules. Upgrading a CAMM-based laptop, then, could mean swapping out the whole module for another if your aim is a higher-capacity upgrade. That could be pricey.

Also, the use of the interposer module here allows for a bit of vertical clearance under the CAMM module. The space is not being leveraged for anything additional here in our Dell Precision example, but in theory, the room could be used to layer components one atop the other. So you might see, for example, an M.2 drive slot parked under a CAMM module, saving the board space via layering.

Any kind of adoption at scale of CAMM memory modules won’t roll out until at least 2024, as the initial spec is being finalized in 2023. Check back for more on the present and future of CAMM, which will, most likely, eventually come to a laptop near you, and check out our video up top for a deeper discussion of CAMM.