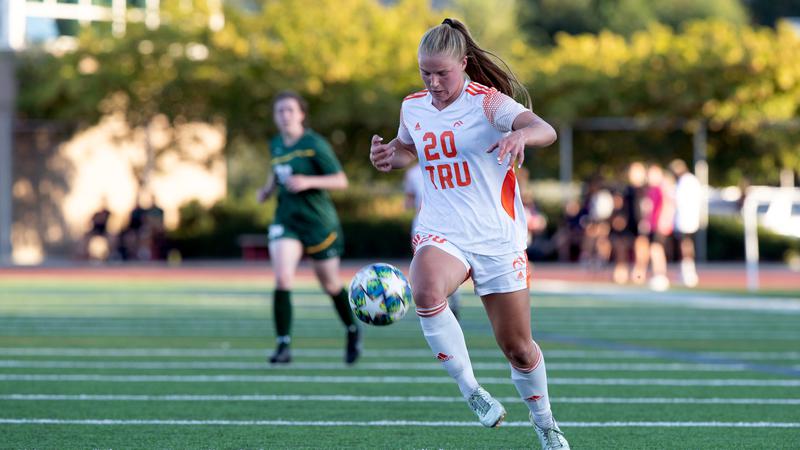 “Well I’m Irish, and my Mom’s got a shamrock at home. She’s holding on to it, watching all the games,” Lewis explains. “That could be it.”

Lewis, who made the move from the wing to the middle of the pitch this year, is third in goals scored in Canada West this season. While lots of his goals have come from inside the 18-yard box, his favorite goal of the year was a memorable one.

“Probably the 30-yard shot at Hillside here,” Lewis says. “That was a good one.”

With five wins, one loss, and a draw, the men’s team sits atop the Pacific Division standings in Canada West but has yet to crack the U Sports Top Ten Rankings this season.

Expectations for the WolfPack Women’s team weren’t quite as high heading into the season. However, they’ve made a mid-season statement over the past four games, winning three and drawing the other — the longest unbeaten streak in program history.

“Coming into [last weekend] we kind of knew that these were two games we needed to win,” explained WolfPack captain Camryn Curts. “We put our heads down and we did the work and we got the results we were looking for. It was pretty awesome.”

Fifth-year Curts has two goals and two assists in eight games this season. Her squad hopes to build upon that recent success as they host a pair of divisional opponents this weekend at Hillside Stadium. The Trinity Western Spartans come to Kamloops on Friday (Sept. 23), while The University of the Fraser Valley Cascades visit Saturday.

“Friday is going to be a tough game. “Trinity is always really good,” Curts says. “I think the two wins this weekend and the win and tie the weekend before have us pretty confident and looking forward to the weekend coming up.”

The Men’s team is at home for a pair of games this weekend, as well. On Friday, the ‘Pack welcome the University of Calgary Dinos, then the University of Alberta Golden Bears come to town Saturday. Lewis expects him and his teammates to be ready to compete.

“When you’re winning, it’s easy to have a positive mindset,” Lewis says. “We’re starting to face a little more adversity, with the draw [vs Saskatchewan]but still confident.”

The Women’s games get underway at 5:30 at Hillside Stadium both nights, while the Men’s games start at 7:45 pm.