The Five: Everything to know for Week 15

LeBron James and Giannis Antetokounmpo are in position to captain the Western and Eastern Conferences for the All-Star Game.

Every Monday we will tell you what you need to know heading into a new week of NBA action.

Rivalries both old and new take center stage this week with the first-ever NBA Rivals Week. From Tuesday through Saturday, 11 nationally televised games will feature some of the league’s most classic duels and some emerging rivalries between teams and players.

We’ve got two intracity matchups (Lakers vs. Clippers, Nets vs. Knicks), MVP winner vs. runner-up matchup (Nikola Jokic vs. Joel Embiid have finished 1-2 in each of the past two seasons), playoff rematches (Warriors vs. Grizzlies, Mavericks vs. Suns, Timberwolves vs. Grizzlies) and the two teams that share the record for most NBA championships (17) and have met in 12 NBA Finals (Celtics vs. Lakers).

#NBARivalsWeek is going down next week!

Classic and budding rivalries will take center stage. Lock in for some incredible matchups beginning Tuesday 1/24 on TNT! pic.twitter.com/iGbx2tvael

Take a look at the full schedule below and check out our Rivals Week Viewer’s Guide on Tuesday for an in-depth breakdown of each matchup, digging into the history and numbers behind the rivalries.

See below for the Week 15 schedule matrix for each conference. Here are a few key takeaways: 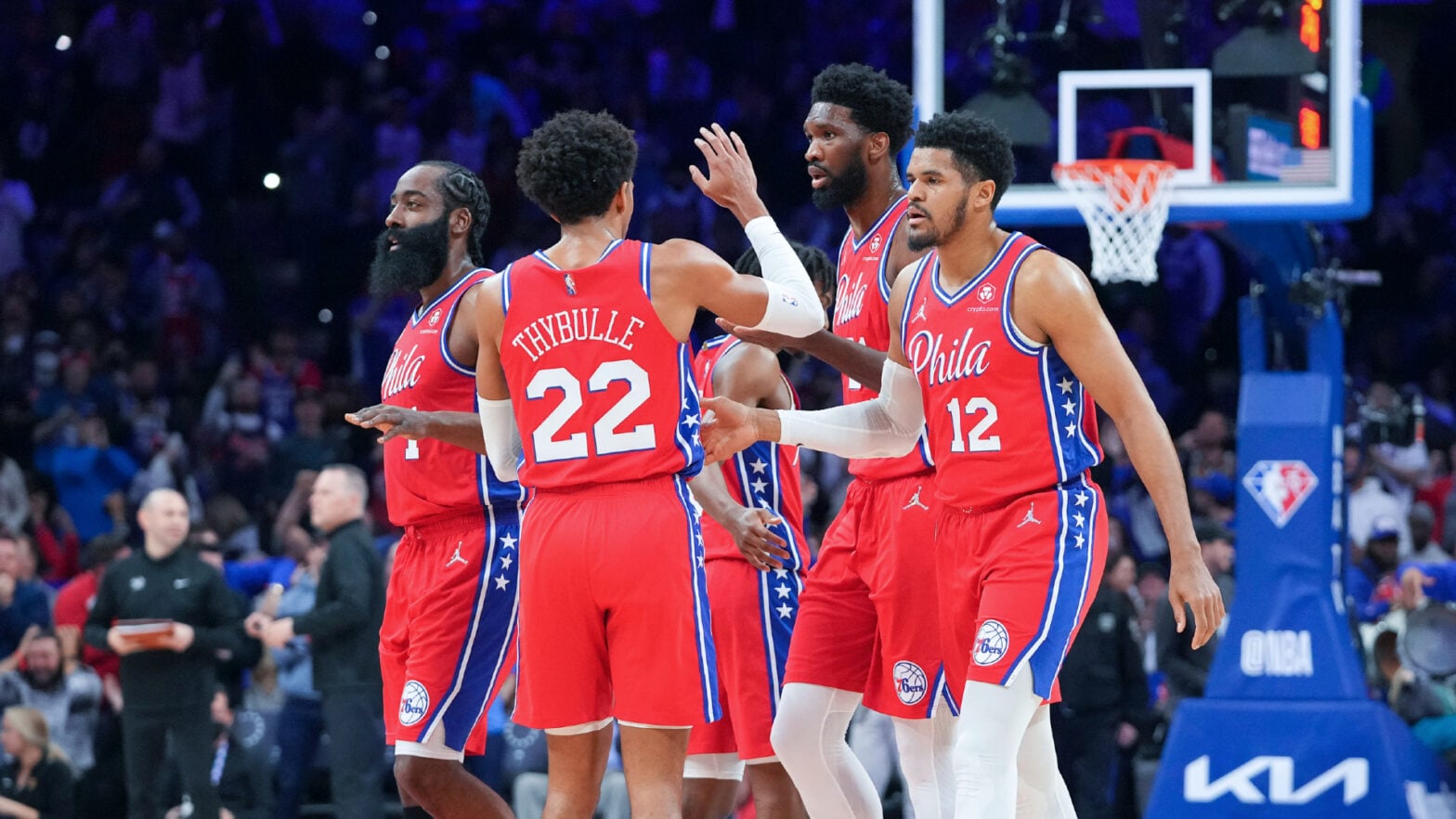 The Sixers have an extremely tough week ahead.

Fan voting for the 2023 NBA All-Star Game wrapped up on Saturday night, so now it’s time to tabulate the final results and reveal the first 10 players headed to Salt Lake City next month for the 72nd NBA All-Star Game on Feb. 19.

The starters, including the two team captains, will be revealed on Thursday, Jan. 26 at 7 pm ET during the TNT NBA Tip-Off presented by CarMax. The team captains will be the All-Star starter from each conference who receives the most fan votes in his conference. While the fan vote is used 100% to determine the team captains, fan votes account for 50% of the vote to determine the starters for the game while current NBA players and a media panel account for 25% of the vote each.

The 14 players selected as reserves, which are voted on by NBA head coaches, will be announced on Thursday, Feb. 2 during TNT NBA Tip-Off. The date and time of the NBA All-Star Draft Show is still to be determined and will be announced at a later date.

This is the sixth consecutive All-Star to use the team captain format, which debuted in 2018. LeBron James has been named a captain in each of the first five All-Star Games under this format and is 5-0 as a team captain. Based on the third round of fan returns, he is in position to earn his sixth straight captaincy and will look to keep his undefeated streak alive.

LeBron James and Giannis Antetokounmpo lead their respective conferences in the third fan returns of #NBAAllStar Voting presented by AT&T.

Fans account for 50% of the vote to decide All-Star starters. NBA players and a media panel account for 25% each. pic.twitter.com/nqNZqkeVJw

While NBA Rivals Week dominates the nationally televised games, make sure you have NBA League Pass ready for these must-see matchups as well.

The Celtics enter Week 15 with the league’s top record at 35-12 and riding a nine-game winning streak. They will look to extend that streak to 10 in a row – which would be their longest streak since Oct./Nov. 2019 – as they face the Magic, which is one of three teams this season to beat the Celtics twice, along with Cleveland and Chicago. The Magic lead the season series 2-1 with rookie Paolo Banchero leading the way with 24.7 points per game against Boston.

This Spurs-Blazers matchup marks the debut of “Throw it Down with Bill Walton,” an alternative game telecast hosted by NBA 50th and 75th Anniversary Team member and legendary broadcaster Bill Walton that will stream exclusively on NBA League Pass via the new NBA App.

Walton — a two-time NBA champion, NBA MVP, Sixth Man of the Year, Finals MVP and acclaimed Emmy Award-winning broadcaster — will not only share his thoughts on today’s game and the league’s brightest stars, but share stories from his remarkable life. and career, and welcome a wide array of guests across sports, music, literature, business, and entertainment. Monday’s game will feature appearances by NBA legend Julius Erving and Nike co-founder and chairman emeritus Phil Knight.

The Nuggets saw their nine-game winning streak snapped on Sunday against Oklahoma City, but Denver (33-14) remains atop the Western Conference standings entering Week 15, while New Orleans (26-21) ranks fourth. New Orleans won the first meeting on Dec. 4 behind a career night from Jose Alvarado, who finished with 38 points and eight 3-pointers off the bench.

We’ll have to keep an eye on the injury report for this game. Nikola Jokic has missed the past two games for Denver with a hamstring injury and is listed as day-to-day for the Nuggets, while Brandon Ingram participated in 5-on-5 work on Saturday as he nears his return from a toe injury that has kept him out the past 28 games.

Anthony Edwards ended Week 14 with a monster game on Saturday as he scored a season-high 44 points with eight 3-pointers and two poster dunks in a win over Houston. When Edwards is playing like this, he is 100% must-see TV, so make sure you keep an eye on the Timberwolves as you scroll through your League Pass games this week.

This is the second meeting of the season between Dallas and Utah. The Mavericks rallied from 15 points down to earn a 103-100 win on Nov. 2 behind 33 points and 11 assists from Luka Doncic. There have been 54 games this season in which a player has recorded at least 30 points and 10 assists, and Doncic has a league-high 14 of those games, double that of any other player in the league. Nikola Jokic is second with seven, Trae Young has six, and no other player has more than two such games.

Over the past decade, Stephen Curry and Klay Thompson have provided some of the most jaw-dropping shooting displays in NBA history. Two of their signature accomplishments happened to fall on the same day (Jan. 23) just separated by six years.

January 23, 2015: Klay Thompson set the NBA record for points in a quarter by scoring 37 in the third quarter of Golden State’s 126-101 win over Sacramento, topping the previous mark of 33 points held by George Gervin and Carmelo Anthony (Kevin Love has since scored 34 in a quarter to hold second place). Thompson finished with a then career-high of 52 points, a mark he has topped twice since: 60 points against Indiana on Dec. 5, 2016, and 54 points against Atlanta earlier this month on Jan. 2.

January 23, 2021: Stephen Curry hit a catch-and-shoot 3-pointer in the third quarter against Utah to pass Hall of Famer Reggie Miller for second place on the NBA’s all-time 3-pointers made list. Of course, this was just a precursor for Curry passing Ray Allen last season (Dec. 14, 2021) to become the all-time leader in 3-pointers made with No. 2,973. Curry enters this week with 3,274 career 3-pointers made as he continues to push the record to new heights for players to chase for years to come.