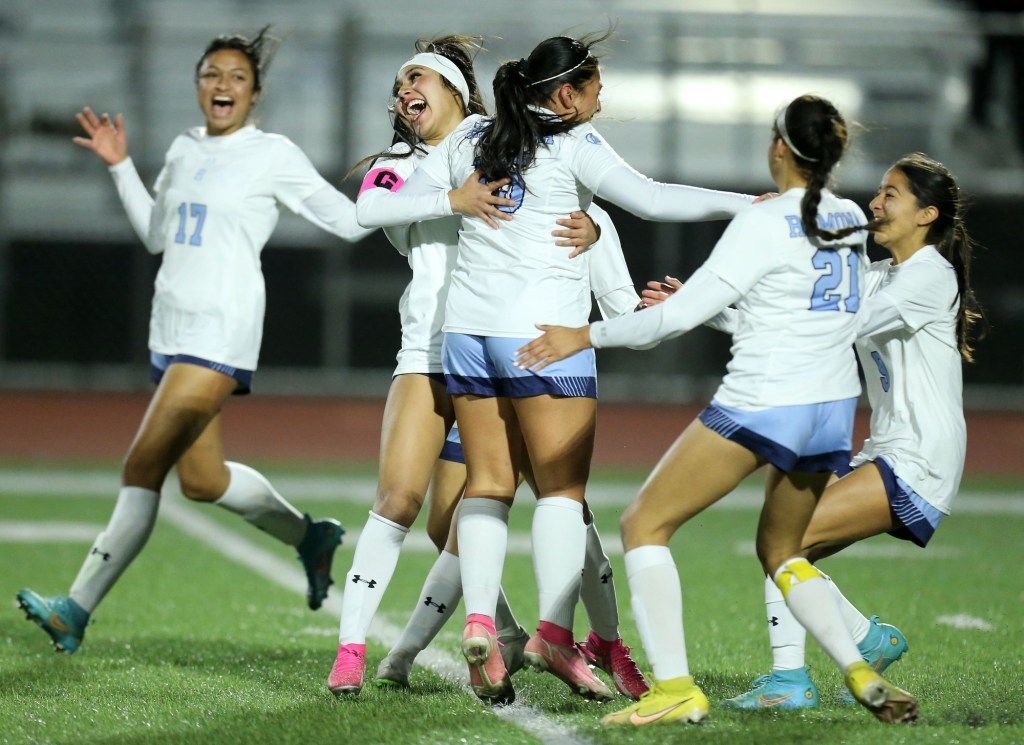 RIVERSIDE — Lilian Gomez may be young, but she has a cultured right foot.

The freshman winger scored the match-deciding goal directly from a corner kick, as the Ramona girls soccer team upended Arlington 3-2 on a windy Wednesday night to move to the top of the River Valley League table.

“I felt like the wind was coming our way, and I hit it where I usually hit it,” Gomez said. “I knew the wind would carry it, so I aimed for the back corner and it went in.”

That goal by Gomez was scored in the 22nd minute as Ramona (11-5-2, 5-0-2 in league) extended its unbeaten streak to seven matches while snapping a seven-match winless streak against Arlington.

The Rams, no. 4 in the CIF Southern Section Division 6 rankings, have won 11 of their past 12 games.

“If you shoot 10 of them, one will go in, right?” Ramona coach Naomi Castro said. “The girls were pumped for this game. We knew we needed to win. A tie wouldn’t be enough.”

Daisy Corona scored with a header from a corner kick in the second minute to give Ramona an early lead, and Emely Rodriguez hit from outside the penalty area for a 2-0 advantage in the 16th minute.

Michaela Fitzpatrick scored on a counterattack in the 18th minute for Arlington (9-10-1, 5-1-1), which was put under pressure and outshot 5-2 during the first half.

“All credit to Ramona,” Arlington coach Laikyn Koss said. “I told our girls this was going to be the league championship, so to speak, and it was going to be about who brought it out tonight.”

The goal by Gomez gave Ramona a 3-1 lead, and Rams goalkeeper Kennedy Bueno made the lead stand up with a pair of saves.

All five goals were scored in the first half on Wednesday, with Arlington grabbing its second right before halftime on a long shot from Mia Dileo that bounced over the goal line.

Bueno was quicker to the ball in the second half to snuff out several opportunities and benefitted from a little luck when Fitzpatrick’s free kick in the 60th minute ricocheted off the post.

“(Bueno) has definitely stepped up this year, getting more vocal and working with the defenders, and she had quite a streak coming into this game,” Castro said.

Bueno and Ramona had recorded six consecutive shutouts before Wednesday night, a streak of more than 480 scoreless minutes.