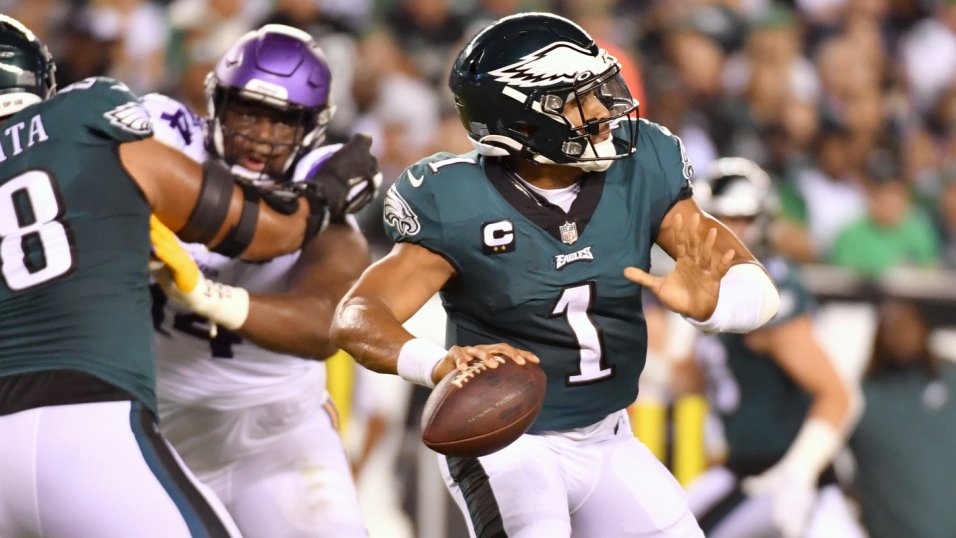 • Eagles Stay on Top: After placing no. 1 in PFF’s preseason and Week 1 offensive line rankings, the Philadelphia Eagles maintained their spot with another dominant outing.

• Cardinals Biggest Risers: While their run blocking is less impressive, the Arizona Cardinals are pass blocking well for quarterback Kyler Murray through two weeks of action.

• Bengals Biggest Fallers: The Cincinnati Bengals seemingly upgraded at multiple offensive line positions this offseason, but they dropped yet again in these rankings following Week 2.

Few things are more important to an NFL team’s success than the quality of its offensive line. Disastrous lines, or even disastrous weak-link mismatches, can determine the outcome of games, while strong units give an incredible advantage to everything on offense.

This season, we will be keeping track of PFF’s offensive line rankings as well as highlighting the biggest weak-link player and their upcoming opponent to identify any obvious matchup advantage one way or the other.

1. Philadelphia Eagles (No Change from Week 1)

The Eagles continue to field the best offensive line in the game, and it’s helping them dominate on offense and crush overs every week. Landon Dickerson may still be arguably the unit’s weakest link, but it’s an unfair descriptor of a player who has allowed just one pressure through two games. The Eagles play Washington in Week 3, and while the Commanders still have talent on the defensive front, that unit has not shown it can hold up to this kind of assault.

Kansas City showed against the Chargers that it still has an excellent offensive line overall. Patrick Mahomes was pressured on 36% of his dropbacks, but that was going up against arguably the best edge rush duo in football this season. Consequently, Orlando Brown Jr. has struggled somewhat this season, earning a 39.2 PFF pass-blocking grade, but he’s not going to face a similar threat against Indianapolis this week.

Technically, rookie Cole Strange is the weakest link on this line, but he was able to go toe-to-toe with Cameron Heyward in his second start and look capable while doing so. He gave up some pressure and a few more losses that never got to become pressure, but the fact that the team believed in him enough to give him that assignment speaks volumes. The Patriots’ offense isn’t playing well, but the line isn’t the source of the problem.

A healthy Buccaneers offensive line would be in consideration for the best in the league, but the unit has been dealing with injuries since training camp and has resorted to backups several times. Tom Brady helps to keep the tide at a high level, but the interior will be seriously tested this week against Kenny Clark and the Packers’ defense. Rookie Luke Goedeke has allowed a sack, a hit and two hurries in two games.