MLB home run record: 15 current sluggers who could be next to make a push for a 60-homer season 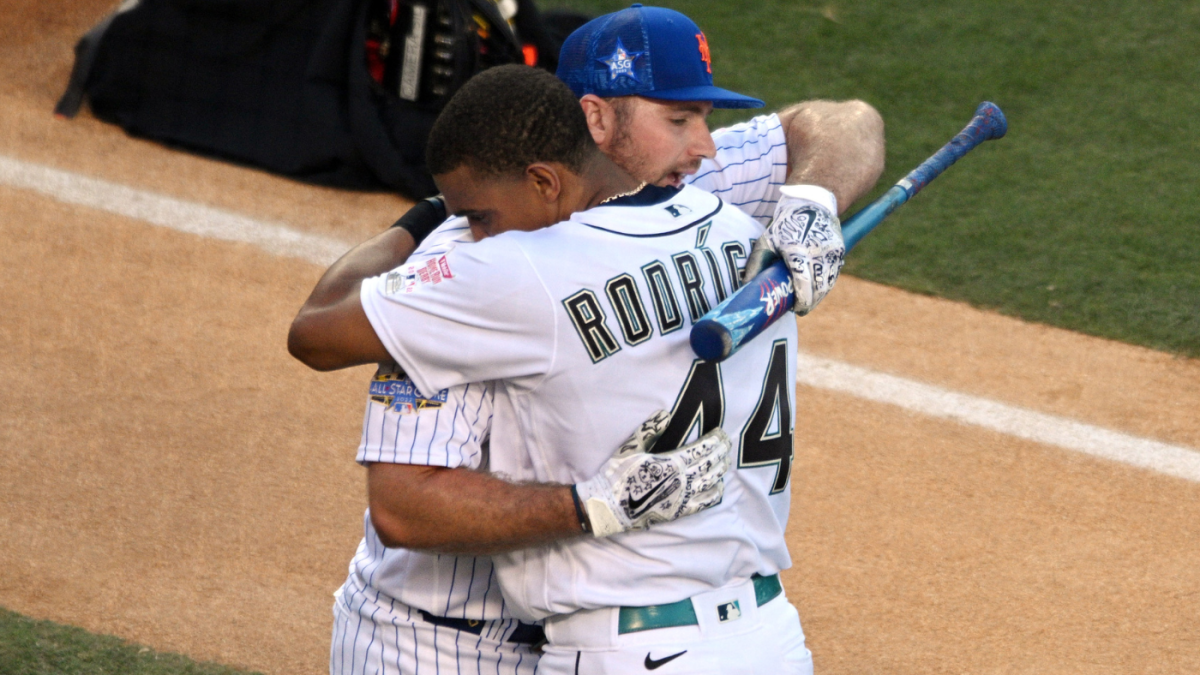 Aaron Judge is having a season for the ages. We already knew that, but he went deep again Tuesday night and it was No. 60. He’s now the sixth player in MLB history to hit 60 home runs in a single regular season.

One of the many topics on our minds is who else might be able to make a run at this hallowed figure here in the relatively near future?

Getting to 60 is extremely rare, but getting close enough to make us think about it? Not so much.

With that in mind, let’s take a look at what player might be the next to make a run at 60 — not necessarily get to 60, but get close enough or hit at a pace that makes us think it’s possible. More simply: What player will be the next one to make us think about 60?

Here are some selected candidates (listed in alphabetical order) with my guess as to their chances of one day challenging 60.

These are listed alphabetically by last name and not ranked. If I ranked them, however, Pete would find himself towards the top of that list, too. He’s already hit 53, as noted. He hit 16 in 57 games in 2020 (a 162-game pace of 45 home runs). He has a shot at 40 this season, as he hit his 37th Tuesday night. He’s big and strong. He’s still got several years of prime left. What’s not to like?

Chances of challenging 60: Decent to good. He’s one of the best bets here.

He has a career high in home runs this year, although he’s still short of 40. But that sentence comes with some pretty big caveats. Alvarez is still only 25 years old. He homered 27 times as a rookie, but that was in just 87 games. This season, he’s only played in 122 games and still has 37 homers. His contact skills have improved and he hits the ball as hard as anyone. To wit, Judge leads the majors in average exit velocity this season (shocker, I know) and Alvarez is a close second.

He has every characteristic you’d want.

Chances of challenging 60: As good as anyone.

He’s 28 years old and has the ability. We just can only say “if he could just stay healthy” so many times before it has lost all meaning.

Chances of challenging 60: Low, to the point I almost didn’t include him due to injury history.

Have you seen his highlights? The Pirates rookie hit the hardest ball ever. It’s true, statistically, in the Statcast era, at least. He has a handful of the hardest hit balls this season, including the single hardest hit at 122.4 miles per hour. He has 17 home runs in 74 games and that’s as a rookie at age 23. There’s bound to be growth at his age and with this kind of raw talent, the proverbial sky is the limit.

He is also hitting just .220 with 118 strikeouts against 21 walks in 304 plate appearances. Sure, those aren’t home run numbers directly, but weak bat-on-ball skills and poor plate discipline make the margin of error for sluggers razor thin.

As I said, there’s bound to be some growth, but if he doesn’t clean up the weaknesses in a major way, the ceiling is probably somewhere in the mid-40s.

Chances of challenging 60: Moderate? Lower than that, probably, but it’s so tough to tell right now. He has the upside, but the holes hold back his chances.

He hits the ball awfully hard. He sits in the top five of average exit velocity this season and that isn’t an outlier. He’s always been one of the best there. He’s still only 25 years old, too. Devers hit 38 home runs last season, although a terrible second half this year has him falling backwards.

The incredibly short porch to right field in Fenway helps the lefty here and the Green Monster in left field could help — but could also make hard line drives into doubles instead of home runs.

I would have liked him more after 2019 (32 homers, 54 doubles at age 22, thinking a lot of those doubles would turn into home runs as he aged), but he’s still plenty young for at least one great run.

Chances of challenging 60: Low-ish. An outside shot.

The former first-rounder had 15 hits in 34 Triple-A games before getting the call to the majors this season. He’s hit 14 in his 89 games with the big-league Cardinals. In and of itself, that isn’t head-turning when we’re talking about a run up into the mid-50s or more, but Gorman is only 22 years old and just learning to hit MLB pitching.

As with Cruz, the low average, low walks and high strikeouts are certainly a concern, but there’s plenty of upside.

Chances of challenging 60: We’ll say low chances for now, but he could prove it wrong quickly.

Easy pick here, right? Vlad hit 48 in 2021 as a 22-year-old. He’s taken a decent step back this season, but we’ve already seen the skill set needed to make a run up into the mid-50s and beyond.

It’s still incredibly hard to push up past 50 and keep going in a single season. Plus, there’s always the chance last season was the outlier on Guerrero’s career, but what’s the fun in thinking like that?

So he’s already done this once. If we wanted to count the season he hit 52, he’s at least approached 60 twice. The question now is, could he make another run?

Of course he is could. He’s already shown he can.

The smartest bet is on Judge never having a season like this again. He’s had so much go right for him this season and, to be clear, he’s created the majority of those breaks for himself. There are evident adjustments and improvements all over the place. It truly is a season for the ages.

Something to keep in mind: Judge is 30. There probably isn’t a ton of prime left. He has had issues with injuries in the past, too.

It is interesting to consider if Judge signs elsewhere. Contrary to the popular narrative, Yankee Stadium isn’t overly home run friendly, especially for right-handed hitters. Overall, it rates out around the middle of the pack and that short right-field porch mostly benefits lefties. A home ballpark change might actually benefit him.

Chances of challenging 60, again: Pretty decent, but I feel like we’re seeing his career year. I’ll say he doesn’t hit 50 again. If he somehow ends up signing with the Rockies, I will change this position.

Yes and it is regarding his chances on approaching 60 while also pitching.

I don’t think he could make a serious run past the 46 he hit last season as long as he’s still in the rotation. That’s just too much physical burden to put on a guy to expect him to be able to challenge such a figure as 60 home runs in a season.

If not for that, all the ingredients are there.

Chances of challenging 60: If he quits pitching, I’d say strong, to quite strong. Until then, nope. Then again, Ohtani’s basically already shown betting against him doing something is silly, so don’t take my word for it.

Riley’s first full season at the MLB level was 2021 at age 24. He hit 33 home runs, 18 of which came in his last 69 games. He’s up to 36 this year with a chance to get into the low-40s. It’s a nice progression for a strong player who hits the ball very hard on a regular basis.

Riley feels like a guy who will be hitting 35-to-45 home runs a season for a long time. Sometimes those guys never get to 50 in a year (even Hank Aaron never did! His career high was 45). Sometimes there’s one big jump.

Chances of challenging 60: I’m gonna say it’s low. Riley feels like a middle-order hitter who will consistently sit in the 30s with some 40-plus homer seasons mixed in. There is absolutely nothing wrong with that, either.

The soon-to-be AL Rookie of the Year is leading the Mariners to the playoffs. He’s only 21 years old and we’ve seen so many examples of players who are already studs at this age developing more home run power at the major-league level. He’s already in the top 10 percent in average exit velocity and doesn’t have nearly the same concerns in the strikeouts and plate discipline departments as other youngsters.

Also, he’s already improving at the MLB level. Through 12 games, he was hitting .136 with a .159 slugging and 22 strikeouts in 44 at-bats. He didn’t hit a single home run in April. His best month of the season has been September. Simply: This is heading all kinds of good places.

Chances of challenging 60: I might be a bit overzealous here, but I like his chances to get in the ballpark at least once. Even if he only tops out around 55, he’s going to venture up into the territory where we’re talking about 60.

He’s already gotten close enough that it was a serious discussion. He hit 59 in 2017. Throughout his entire career — which is 13 years and counting — his 162-game average is 42 homers. He has as much raw power as anyone. Only Judge and Alvarez have a higher average exit velocity this season.

On the other hand, he has 120 strikeouts in 362 at-bats this season and his injury history is awful. He’s going to be 33 years old next season.

Chances of challenging 60, again: Between the lack of contact and injury concerns, I’m just not seeing it.

Say what you will — and after all that has happened this season, many will have negative comments — but the physical ability here is off the charts and that will remain the case after his return. Obviously, the PED suspension lingers into next season, so a run in 2023 is off the table. With 2024 and beyond, though, it’ll be interesting to see.

If there’s going to be a fully healthy season in the future and Tatis improves through his early 20s like many players with his insane upside, the chances of him making a run at a 60-homer season exist.

Now, there will inevitably be a crowd mindlessly screaming “steroids!” and that’s the price Tatis has to pay for his poor judgement. I also don’t believe with his track record that these were magic pills single-handedly driving his high home run rate. He’s going to be a stud when he comes back.

I’ve said multiple times above that players develop more home run power as they get to know the league better. Trout is an example. He hit 30 homers his rookie year and 27 in a full 2013 season. His career high came in 2019, when he hit 45 home runs in just 134 games. His pace didn’t change much the next two seasons, but there was a pandemic and then an injury-plagued 2021 season where he only managed 36 games.

Injuries have hampered him. He missed time again this season and he hasn’t played in more than 140 games since 2016.

Chances of challenging 60: Given the concern moving forward with his rare back condition, I think we have to say he won’t ever top 50. I find it impossible, however, to ever completely write him off. The final word on his chances will simply be “slim.”

I wanted to include a minor-leaguer on this list and asked around to those in the know. Walker was the name that kept coming up. The Cardinals’ first-round pick out of high school in 2020, Walker is said to have elite raw power. He only turned 20 years old in May and has 19 home runs in 119 games in Double-A this season. As he continues his development, the number will only continue to rise, even as he moves up levels. If no one beats him to it, maybe Walker is the guy.