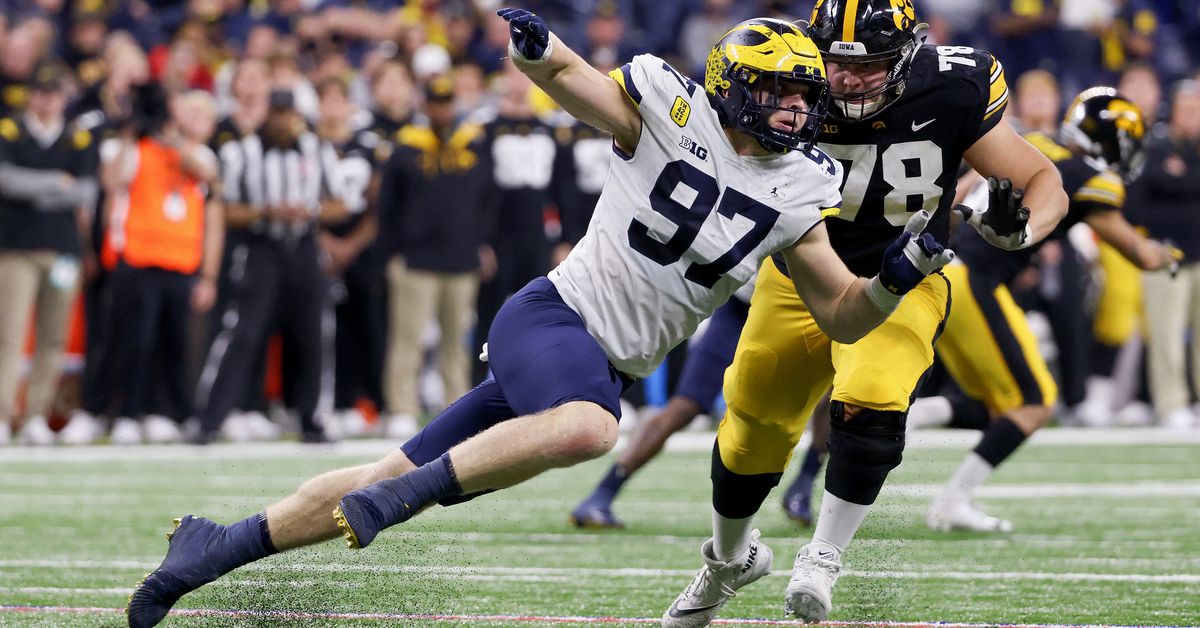 The Detroit Lions invested heavily in their defensive line during the 2022 NFL Draft, spending the second overall pick on Michigan’s Aidan Hutchinson and the No. 46 overall pick on Kentucky’s Josh Paschal.

In college, both players gained experience playing on both the left and right edges, as well as at the 3-technique, but their skill sets suggest they would likely play roles slightly different from one another in the Lions’ defensive scheme.

Last season the Lions used a 3-4-4 base, but have noted on several occasions this offseason that they are shifting to a 4-2-5 look because it better suits their players. Now, which version of a 4-3 base they plan on using still remains a mystery, and defensive coordinator Aaron Glenn has been insistent that the defense would remain multiple at their core, but there have been some indicators of where the defensive linemen would play this season.

But before we get to that, let’s discuss some basics of what a 4-3 looks like.

There are variances to the 4-3 (or 4-2) as well. In the “4-3 Over” the left side of the line slightly expands to cover the tight end and one of the 3Ts shifts to nose tackle (1-technique) for better gap coverage. In the “4-3 Under” the left side of the line pinches in, with the 7T moving to the 5-technique (lining up on the outside shoulder of the offensive tackle), the interior flips, and the tight end is covered with a linebacker or safety. In a “wide-9” the interior uses a standard two 3Ts and the edge rushers expand from the 7T out to the 9-technique.

Note: For a deeper look into the roles in a 4-3 scheme, check out ESPN’s Matt Bowen’s article NFL 101: The Basics of the 4-3 Defensive Frontfrom when he wrote for Bleacher Report.

After the draft, Lions defensive line coach Todd Wash had a conversation with Detroit Lions ‘columnist Mike O’Hara and the pair discussed how the Lions’ rookie defensive linemen fit into the revamped defense (note: emphasis within the quotes is my own).

“We had Hutchinson extremely high in the draft process,” Wash said to O’Hara. “We feel he was the most ready to play. We’re going to put him at the rush position in our base. Then he can play either defensive end in the sub package. We changed a lot of our philosophy up front. It’s going to get us more attacking. He’s got the ability to play either end spot. ”

In a 4-3 base, the “rush position” is typically on the weak-side, or right side, of the formation (the side in which the tight end is not present), a similar role to what Charles Harris played last season . In subpackages, both edges typically become “rush ends” which gives coaches the freedom to move Hutchinson between both sides.

This will be familiar territory for Hutchinson (6-foot-7, 260 pounds), who saw 372 snaps on the weak-side and 385 on the strong-side in 2021. It’s worth noting that Hutchinson will likely primarily line up on the right side with the Lions for two reasons: 1) that’s typically where teams put their most athletic edge rusher, and 2) Per The Atheltic’s Dane Brugler’s Draft guide (subscription required), Hutchinson posted the quickest “swim rush right” time at the NFL Combine at a blistering 1.69 seconds.

Paschal (6-foot-2 1⁄2, 268 pounds) focuses his game on power and first-step quickness, rather than burning off the edge. So the Lions have a different plan in mind for him to best utilize his skills.

“We’re going to play him at 5 (outside the tackle) in base,” Wash said.

“We see him possibly going to tackle at some point,” Wash continued. Paschal is a guy who can play inside and outside. He could be that disruptive three-technique if he’s big enough to handle it in there. He has great flexibility. ”

Wash essentially confirmed what many of the Lions beat writers suggested after the selection of Paschal: if he can put on some positive weight, his skill set could make him a very disruptive interior presence. If he needs to stay lighter, he has the ability to stick as a base left defensive end — and in all likelihood, he will probably be doing all of it.

It’s still early and we have yet to see the scheme or the rookies in person, but at this time, the EDGE depth chart likely looks like this.