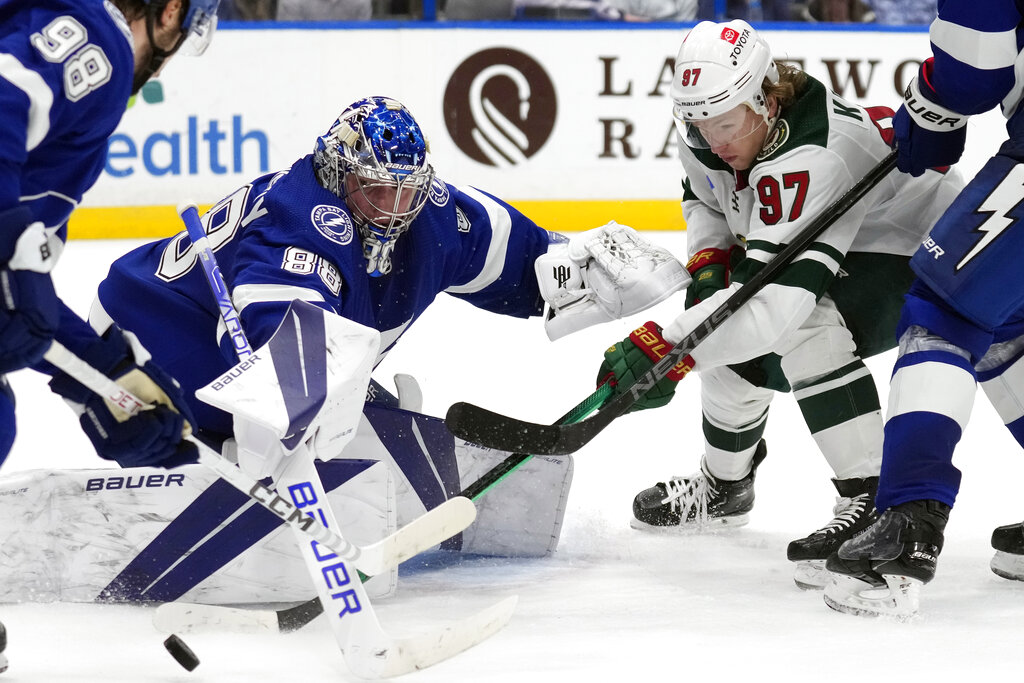 It was a memorable night in Amalie Arena as the Tampa Bay Lightning defeated the Minnesota Wild 4-2 Tuesday night.

Before the game, the Lightning gave a tribute to their captain Steven Stamkos for scoring his 500th NHL career goal last week.

In Tampa’s win against the Wild, they recorded their 10th-straight home win, tying their second-longest home winning streak in franchise history.

To add to the night of achievements, goalie Andrei Vasilevskiy recorded his 250th NHL career win. That makes him the second fastest goalie to reach 250 wins in NHL history, behind Ken Dryden.

The game started with minimal offense on both sides of the ice. It was a physical battle between the two and it took a bit for the refs to blow the whistle and send another into the penalty box.

Alex Killorn and Anthony Cirelli gave the Lightning their best chance at getting one across the line charging the net but couldn’t get it in.

Pierre-Edouard Bellemare also took a stick across the throat but no call.

Nick Paul and Jake Middelton exchanged some physicality that brought the energy up on the ice.

The first penalty called was on Stamkos for hooking. While the Wild tried to take advantage of their power play, they got a little too defensive and it went against their favor. Joel Eriksson Ek was whistled for holding and made it a four-on-four game.

As if the game itself isn’t physical enough, Wild’s Ryan Hartman deflected a puck off the face and couldn’t make it back to the bench as he was hurting on the ice. In the meantime, he took a shot block against his knee.

All in all, it was a very defensive period for the two teams.

The Wild came into the period on a power play, but the Lightning got their best scoring chance of the game during it.

A rush by Brandon Hagel sent Marc-Andre Fleury out of the net, sliding into Hagel’s shot. Paul tried to grab the deflection-pass from Hagel but took it wide.

All the action seemed to happen on short handed opportunities at this point. Eriksson Ek entered the zone alone, and he was able to sneak one around Vasilevskiy, 1-0 Wild.

Corey Perry scored the Lightnings first goal as he tipped Ross Colton’s slapshot into the net.

The Lightning weren’t a fan of the guys in stripped shirts as they exchanged some words on the ice throughout the first half of the game.

Mikhail Sergachev was whistled for tripping and into the box he went. However, that wasn’t it.

As the refs skated to center ice, Hagel let them hear a mouthful about a miscall on him earlier in the period.

They didn’t appreciate that and gave Hagel a 10-minute misconduct for verbal abuse.

The Wild enjoyed their powerplay and scored a goal to put them ahead 2-1.

But, not so fast.

Frederick Gaudreau was sent to the box for hooking and here comes the Bolts power play.

Corey Perry took advantage of this one and sent in another goal from Colton’s assist to tie things up at two.

The final frame of this game began with a handful of back and forth opportunities for both teams.

It was another defensive half like the first period.

But, the Lightning ended up prevailing.

Captain Steven Stamkos skated beside the net and just dragged the puck alongside his stick into the net. A second later, the red light turned on and the goal horn blew, 3-2 Lightning.

Minnesota pulled their goalie with 2:40 left to go and in-came the Lightnings insurance goal. Nikita Kucherov sent a shot in from a distance for the final score of 4-2 Bolts.

The Lightning will host the Boston Bruins Thursday at 7 p.m