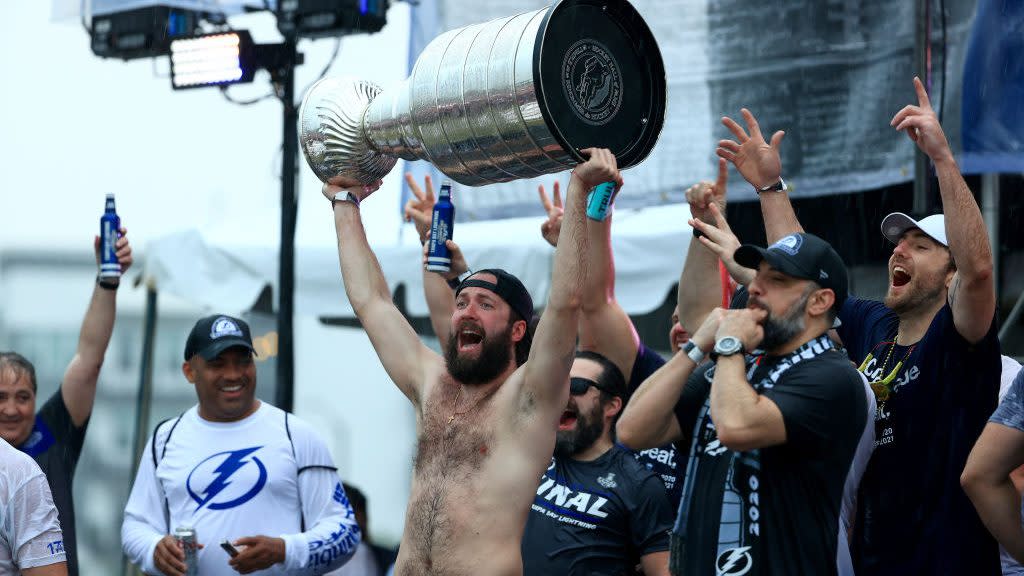 The Wraparound is your daily look at the 2022 NHL Stanley Cup Playoffs. We’ll break down the NHL playoff games today with the all-important television information.

• No Andersen for Hurricanes; Ullmark gets start for Bruins

The Tampa Bay Lightning’s quest for a third consecutive Stanley Cup will begin in Toronto Monday night (7:30 pm ET). The odds are against the back-to-back champions to add another ring to their collection, and the team realizes just how difficult the road will be for them.

“Just because you’ve gone through it does not mean you’re automatically, ‘Well, hey, we’ve done this before,'” said head coach Jon Cooper. “It’s still hard work and that’s what our group’s been good at. They understand the work you’ve got to put in and fighting through adversity at times, it takes work. ”

During their last two Cup runs, the Lightning has never dropped consecutive games and only trailed in a series three times – all three coming in Game 1s. Taking that opening game has proven important in NHL history. Teams win Game 1 in a best-of-seven series are 499-228 (.868) all time.

The Lightning will be tested against a Maple Leafs team that has home-ice advantage and finished with 115 points, five ahead of Tampa Bay in the Atlantic Division. Their lineup is loaded with offensive talent, including 60-goal scorer Auston Matthews, that will challenge goaltender Andrei Vasilevskiy.

“We’ve got to make it hard on him,” said Cooper. “It’s hard enough with his skill set. You can not let Auston Matthews go unabated right down the pipe, time after time again. You could give him a right-handed stick and he’d score.

“I was a little disappointed on how free we let him roam around. You can not do that with him. ”

Cooper was referencing the last time these two teams met – a 6-2 Toronto win on April 4 where Matthews recorded a hat trick and four-point night.

While the Lightning want the three-peat, the Maple Leafs have their own pressure to deal with. Toronto has not won a playoff series since 2004, coincidentally the year in which the Lightning won their first Cup. They set the franchise regular-season records for wins (54) and points (115); celebrated Matthews’ career year; and now have the task of taking on a team eyeing a third-straight title.

“If you are going to push through the obstacle that we need to get through here you might as well start with the best,” said Maple Leafs head coach Sheldon Keefe. “These are the champs. Anytime we’ve been challenged as a hockey team this season, we’ve responded really well. So, I think we have great respect for Tampa Bay, [and] There’s no arguing it, debating it, they are the class of the League at this point. They’ve proven that, they’ve earned that, but there’s no doubt our team will be ready for them. “

Game 1: Bruins at Hurricanes, 7 pm ET – ESPN: Frederik Andersen will not be in net for Game 1 as he recovers from a lower-body injury that cost him six games already. Antti Raanta is expected between the pipes for Carolina while Linus Ullmark gets the nod for the Bruins, who have won the last three times he was in goal. “You want to be playing your best hockey as the playoffs near, and I think you could certainly say he is,” said Boston head coach Bruce Cassidy.

Game 1: Blues at Wild, 9:30 pm ET – ESPN: In other goalie news, Blues head coach Craig Berube would not reveal whether Jordan Binnington or Ville Husso would be his Game 1 starter. They tandem pretty much split St. Louis’ final 11 games of the regular season where they went 8-2-1. Marcus Foligno is expected to play after suffering an injury following a knee-on-knee hit with Avalanche forward Kurtis MacDermid on Friday. “It’s the playoffs,” Foligno said Sunday. “It’d feel wrong sitting out. Just something you gotta play through for a while, and I can do that. Obviously, there’s a little bit more equipment on the knee but other than that, I feel pretty good skating-wise and I would not be out there if I did not feel like I could play. So, I feel pretty good. ”

Game 1: Kings at Oilers, 10 pm ET – ESPN2: Jay Woodcroft was Todd McLellan’s video coach when the two were with the Red Wings over a decade ago and they paired up again in Edmonton years later with Woodcroft moving up to an assistant coach role. Now the two will vie for a spot in the Western Conference semifinals. McLellan’s Kings will have their hands full trying to slow one of the league’s top offenses with Leon Draisaitl and Connor McDavid leading the charge. One big question for the Oilers is will Mike Smith’s play hold up? The netminder was outstanding in April with a .948 5-on-5 save percentage, leading Edmonton to a 9-0-0 record while he was in goal.

2022 NHL Playoffs: First Round, Stanley Cup predictions Why your team will (and will not) win the Stanley Cup Maple Leafs vs. Lightning: 3 Things to Know about First Round series