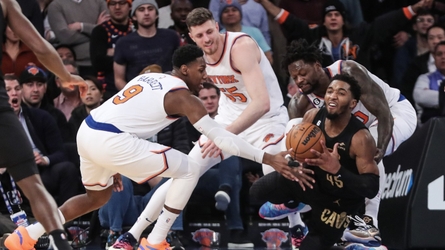 Knicks fans were hoping for a signature Isaiah Hartenstein moment this season, and they finally got one Tuesday night against the Cleveland Cavaliers.

With the clock winding down and New York up, 105-103, Cavaliers star Donovan Mitchell had the ball looking to win the game or send it to overtime. Mitchell blew past Julius Randle with six seconds remaining and went up for the tying score.

The 24-year-old center stepped in to help defend and jumped straight up to contest the shot. Mitchell threw the ball up and it hit the front of the rim, and the Knicks held on for the win.

“It was terrific. Monster play by him,” head coach Tom Thibodeau said after the game. “He played a super game all around. That was huge. I thought our bench was terrific. The start of the fourth quarter gave us a big lift and we needed it.”

Hartenstein scored just four points, but came down with nine rebounds and dished out four assists in 22 minutes. Since Mitchell Robinson went down with an injury, the Knicks have leaned on Hartenstein — who usually plays the five with the second unit — and Jericho Simswho has started the last few games for New York.

While the Knicks lost the previous four games with Robinson out, Tuesday’s win not only snapped their losing streak but it may have sparked something in Hartenstein.

“It’s kind of what I came here for,” Hartenstein said of the final play. “I know myself. I’m not playing as well as I’m supposed to be playing. I feel like I’m letting the fans down, the city down a little bit. But I’m just going to keep getting better because I know I can do it. So it’s just trying to get better and represent New York.”

And what Hartenstein came here for was to bring depth to the Knicks, who have struggled to find scoring — outside of Immanuel Quickley — from the second unit.

While their scoring output wasn’t great Tuesday night, Obi Toppin being the only one who scored in double-digits, they all were a plus on the court, something the starters couldn’t say.

“I think what we bring is energy, I think that’s what we have to bring,” Hartenstein said from the bench. “Bring something a little different than what the first unit is, where it’s a little bit more iso. So I think that was a good start for us and we just gotta keep building. Obi the last couple of games have been great. So just keep building together.”

If the Knicks want to weather the storm of losing their big man and stay in playoff position, they’ll need the bench to step up and make plays like Hartenstein’s on a more consistent basis. They’ll have their chance Thursday when they travel to Boston to face the Celtics in one of their toughest tests this season.