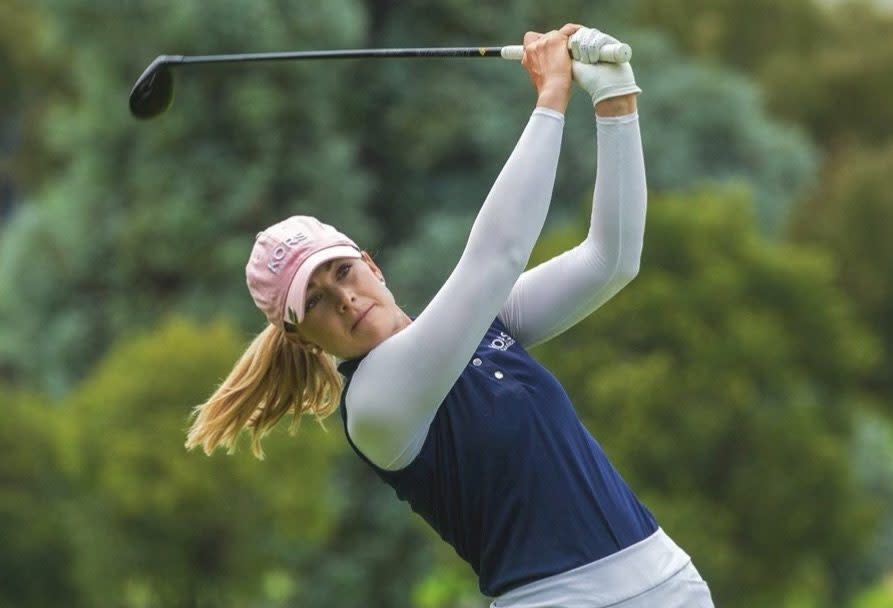 Kelly Whaley was back home in Palm Beach Gardens, Florida, chasing after two 9-month-old black Labs named Gracie and Lulu, when she picked up the phone. She’ll soon be off to Fort Myers, Florida, with her mother, Suzy, for US Women’s Open qualifying May 4 at The Forest Country Club.

Suzy, the first female President of the PGA of America, qualified for her first US Women’s Open in 1986 at age 19 and will caddy for her youngest daughter this time around.

Kelly, now 24, would love to make her first USWO appearance this year at Pine Needles, site of her US Kids Golf World Championship title. It would be a dream, she said.

“My mom is really good at bringing me back to the present, whether that’s in a nice way or not so nice way,” said Kelly. “She knows when to give you a kick in the butt or say it’s all good. That’s what I really love about her caddying. ”

It has been a year of firsts for Kelly, who competed overseas for the first time in March at the Aramco Saudi Ladies International. While there she set a Ladies European Tour record of eight consecutive birdies in a final-round, course record-tying 63 at Royal Greens that put her in the top 10, giving her a spot in next week’s field in South Africa.

“When I was leaving for Saudi,” said Kelly, “I did not expect to jet off to South Africa right after. That was a blast. ”

Kelly Whaley during the final round of the 2022 Aramco Saudi Ladies International. (Photo: Tristan Jones / LET)

There are five more events on Golf Saudi’s Aramco Team Series schedule this year and on Sunday, Kelly heads to Bangkok for the next installment.

Competing in events backed by Golf Saudi is a controversial topic, of course, particularly when it comes to human rights issues and the arrival of a rival league in the men’s game. Kelly said she approached the event as an opportunity and “wasn’t really taking account into what was going on outside.”

She also wanted to check out the Ladies European Tour, and what she found in Cape Town, South Africa, was particularly appealing with new friends, stunning ocean views and beautiful vineyards.

“I’m so thankful I did go because it opened many doors for me,” said Kelly, whose sixth-place finish in the Joburg Ladies Open earned her a spot in the Investec South African Women’s Open, where she tied for 26th.

Kelly, who like her mother played for North Carolina, has missed the cut in her last two Epson Tour events, but she tries to channel the feeling she had in the final round in Saudi Arabia every time she tees it up.

That birdie run started on the fourth hole and ran through the 11th, a stretch that included two par 5s. Her longest birdie putt was from 25 feet on No. 7 and her shortest was an inch on the 10th, where she stuffed a wedge from 105 yards.

“It’s almost like you have this confidence that just overcomes you,” she said, “and you can not miss.”

Prior to Kelly’s eight-birdie run, the LET record of seven in a row was shared by Linda Wessberg, Marine Monnet-Melocco, Nicole Garcia, Kristie Smith and Stacy Lewis.

“That round has really kept me going this year,” said Kelly, who had her high school coach on the bag in Saudi Arabia. She would like to secure more invites to LET events this season but will mostly compete on the Epson Tour.

Kelly and her mom have the same competitive spirit. They strategize in similar ways too, and Kelly’s green-reading skills have improved since she started caddying at Seminole Golf Club during the offseason. Kelly, who is naturally more introverted, likes the enthusiasm mom brings.

“My mom is super energetic,” said Kelly. “There’s never a moment of silence, which is what I need.”

Pair of aces: A Patti and a Patty each made a hole-in-one in the same round in Arizona