How the NFL confused the Hunter Henry touchdown non-catch call

At the 2018 NFL league meetings, NFL owners and executives decided to make the rules pertaining to what is and what is not a catch more simple and less subjective. So, they voted to make the part of the rule defining a catch having to do with “surviving the ground.”

What does that mean? It means that since 2018, any receiver who caught the ball and maintained control to the ground while having two feet or another body part in bounds, and making a football move, had possession of the ball. No longer did the ball have to be in the player’s possession after the ball hit the ground for it to be a catch.

In a press conference following the unanimous vote, then-NFL senior vice president of officiating Al Riveron brought up several plays that would be ruled completions under the new guidelines. These included legendary non-catches by Calvin Johnson and Dez “I caught it!” Bryant.

So why, with 6:50 left in the New England Patriots’ 33-26 Thanksgiving evening loss to the Minnesota Vikings, was Patriots tight end Hunter Henry’s touchdown catch ruled a non-catch upon review by Alex Kemp’s crew? This was a ruling for a touchdown that was reversed, so you’d think there’d be absolute evidence that it wasn’t a touchdown.

The tape does not provide that evidence.

Do you agree with this being called incomplete?
pic.twitter.com/OZ8XT7AZAe

It certainly looked as if Henry maintained control of the ball with his hand on the ground.

“I don’t know,” Henry said after the game. “They called what they called. I believe I caught it, but they made the call and we have to live with it.

Kemp was not made available to the media after the game, via pool reporter Mike Reiss of ESPN, but NFL VP of officiating Walt Anderson was, and here’s what he said.

Question: What did you see to determine New England’s Hunter Henry did not maintain control?

Anderson: “He was going to the ground, the ball ended up touching the ground and then he lost control of the ball in his hands.”

Question: Can you explain why he wasn’t granted possession before the ball hit the ground?

Question: He has two hands on it. How much is that factored into this decision, that he had two hands on the ball?

Question: Is there anything else that I didn’t ask that is important to add to this discussion?

Anderson: “No, we’ve pretty much covered all the elements of the catch that are required to make it complete.”

Unfortunately, the question about the modification to the catch rule was not asked. Not that it would have changed the result of the game, but perhaps Anderson would have walked back the whole “surviving the ground” thing, since that hasn’t been part of the NFL rule book since the 2017 season.

If the VP of Officiating doesn’t understand that rule change, what hope do we have that the officials on the field will legislate the call correctly?

NBC Sports rules analyst and former NFL referee Terry McAulay reached out to me with this clarification: “The rule change allowed for a player who controls and gets two feet or another body part down to then complete the catch by performing an act common to the game . That didn’t happen so when the ball hit the ground he had to maintain control. He didn’t.”

Now, that’s a different story. You can argue whether or not Henry maintained control (I still think he did), but we’re not talking about “surviving the ground” here. Anderson confused the issue when bringing that up.

A player who makes a catch may advance the ball. A forward pass is completed (by the offense) or intercepted (by the defense) in the field of play, at the sideline, or in the end zone if a player, who is inbounds:

a. secures control of the ball in his hands or arms prior to the ball touching the ground; and

b. touches the ground inbounds with both feet or with any part of his body other than his hands; and

c. after (a) and (b) have been fulfilled, performs any act common to the game (eg, tuck the ball away, extend it forward, take an additional step, turn upfield, or avoid or ward off an opponent), or he maintains control of the ball long enough to do so.

Movement of the ball does not automatically result in loss of control.

A receiver is considered a player in a defenseless posture (See 12-2-7) throughout the entire process of the catch and until the player is capable of avoiding or warding off the impending contact of an opponent.

If a pass is caught simultaneously by two eligible opponents, and both players retain it, the ball belongs to the passers. It is not a simultaneous catch if a player gains control first and an opponent subsequently gains joint control. If the ball is muffed after simultaneous touching by two such players, all the players of the passing team become eligible to catch the loose ball.

If a player, who is in possession of the ball, is held up and carried out of bounds by an opponent before both feet or any part of his body other than his hands touches the ground inbounds, it is a completed or intercepted pass. It is not necessary for the player to maintain control of the ball when he lands out of bounds.

Any forward pass (legal or illegal) is incomplete and the ball is dead immediately if the pass strikes the ground or goes out of bounds. An incomplete pass is a loss of down, and the ball returns to the previous spot.

Note: If there is any question whether a forward pass is complete, intercepted, or incomplete, it is to be ruled incomplete.

Bryant, who knows what he speaks, was quite unamused. 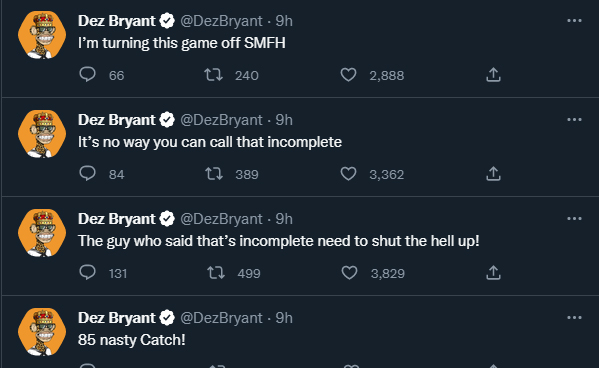