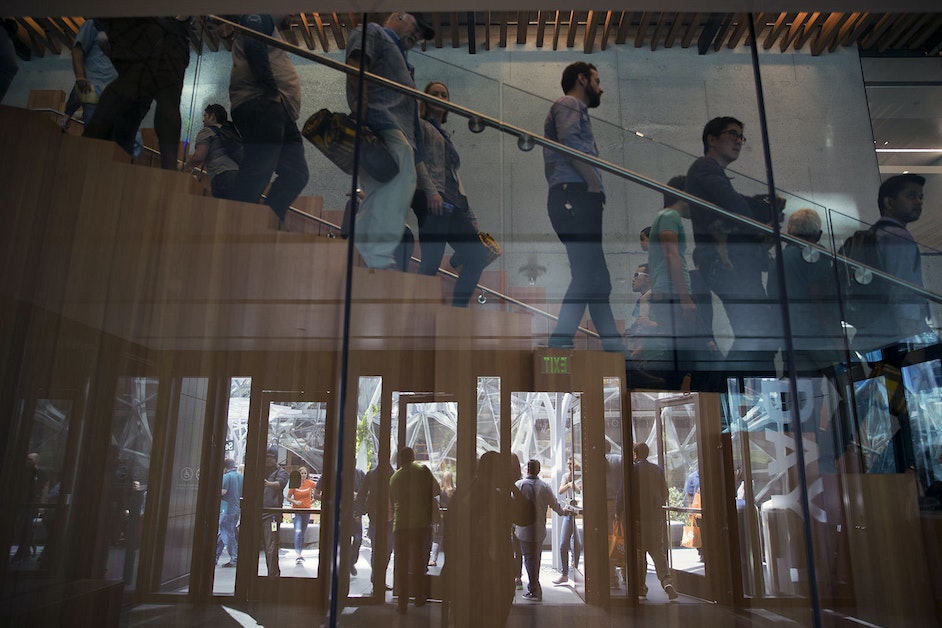 Recent layoffs in Seattle’s tech industry have some workers wondering if they’re going to be next.

The cutbacks are also raising questions about whether this is a correction that’s been a long time coming for the ever-growing industry.

Seattle Times business reporter Paul Roberts has been following the updates from key firms like Amazon. He spoke to KUOW’s Angela King about what it all means, and what’s yet to come.

This interview has been edited for clarity.

Angela King: So, what are the layoff numbers looking like right now?

Paul Roberts: There’s a couple of ways to answer that. There are the [upcoming] layoffs that were recently announced, but then there’s also the ones that have already been recorded by the state since October. That was around 6,000. We can also assume that there is an additional layer of contractor layoffs that have come along with this. So, if you add all that together, you’re looking at somewhere between, I would say, 15,000 and 18,000 jobs over the next couple of months.

We also have visa holders, people who come from other countries, who are being affected by these layoffs. They are key in the industry here.

That’s right. I think that’s one of the under-the-radar aspects of this round of layoffs. It’s really hitting hard among workers from other countries. We have a huge number of Indian citizens and Chinese citizens who make up an ever-larger chunk of the workforce here. And the challenge for them is that once they are cut, you know, they face a lot of requirements around their immigration status. So, they have 60 days to find another job and get sponsored by that new employer, or they have to start jumping through hoops. They might have to leave the country. They might have to get a different kind of visa. It can interfere with their efforts to get a Green Card and eventually become citizens.

I’ve talked with a number of workers from India and from China who are really not sure what to do. Some have been here for years. They’ve got families. They’ve bought houses. Now, they’re faced with scrambling to find a new employer that will sponsor them through the immigration process. And the thing to keep in mind there is that it’s a lottery. You may or may not get selected for a visa. You’re rolling the dice, essentially.

Layoffs are never good. But for a lot of folks here on H-1B visas and other work visas, a layoff can be extra painful and create a lot of extra uncertainty.

Just to put this in perspective, it looks like Washington state could be on pace to lose as many tech jobs as were lost in the dot-com bust of 2001-03. Would you say that’s correct?

Yes, in absolute numbers. If we go back to the dot-com bust, the jobs they lost were like 10.5% of the entire [tech] workforce. They lost a tenth of their workforce. Even if we were to lose all 18,000 jobs this time around, it would be around 4% of the current tech workforce. For the individuals losing their jobs, it’s just as serious as it was 20 years ago. But for the region as a whole, the impact is smaller.

You also have to keep in mind a lot of companies really had bad business models [at the time of the dot-com bust]. If you recall, the companies that were sort of famous back then were famous for generating these really crazy ideas. But they didn’t really produce much in the way of revenue. It was clear it was a bubble waiting to burst here. The products were sold; they just weren’t selling as much.

Now, remote work isn’t going away. People aren’t going to suddenly stop streaming video services. So, a lot of the things we were doing during the pandemic, the tech-related services we were purchasing, we’re still going to purchase those things. We’re just not going to maybe need quite as much as we needed in the middle of the pandemic. So, that makes it really hard to predict. This could be an adjustment that takes maybe six months to get through. It could be longer. That’s one of the many sorts of peculiarities of the pandemic that makes it really tough to know just how serious this could be.

So, is this a correction that will just affect this industry for now? Or do you see this lasting for months beyond?

That’s the multibillion-dollar question. You know, there are a couple of schools of thought here. One is that we’re just seeing the tech industry correct for over-hiring. During the pandemic, we were using more tech services, whether that was Netflix or remote work technologies. Sales were really good for the Microsofts and Amazons. As we sort of moved back to more of a normal economy, as we’ve begun to normalize, the high sales that tech firms were recording weren’t sustainable.

One takeaway is that, as of now, the tech problems haven’t infected the rest of the economy. So, one of the big questions now is: Can it remain isolated? Or, is it the case that the things that are causing the tech sector to slow down are eventually going to hit the rest of the economy? That’s really something that’s tough to call right now.

One of the things we’re trying to do is find those nexuses, those connections – what are the bridges between the tech industry and the rest of the economy? Locally, we can say, well, let’s look at the housing market. One of the big factors behind the cooling housing market is that you now have a lot of tech workers who are either getting laid off or are just kind of concerned about maybe getting laid off. Those are the men and women whose high incomes allowed them not to worry about affordability, so they could continue to buy houses and to rent expensive apartments. That helped prop up the Seattle-area housing market. Okay, so now we have a pullback among those high-rollers. What does that mean for the long-term momentum of the housing market? So we’re constantly looking for ways in which a pullback in the tech sector naturally bridges over into the larger economy.

Even before Amazon’s 10K layoffs, WA’s tech sector shed a record 5,900 jobs in Oct. Some experts think cut workers can find new tech jobs, but some job seekers see pay cuts. “If you do get laid off, it’s very likely you’ll be making less.” @SeattleTimesCo https://t.co/IWBQrQwf7R

Well, what about smaller tech companies? Do they now have a more open playing field when it comes to recruiting workers at salaries they can afford?

This has been the sort of hopeful narrative that has emerged from this latest round of layoffs. You have economists and recruiters saying we’ll soak up those jobs. But if you talk to individual employees that are now on that job market, they’re finding, it’s a little lean out there. Or, if they are seeing positions, sometimes they have to move, leave the state, leave the area or accept lower pay.

One of the interesting things about the Seattle tech market was, because it was such a tight labor market and because we were really focused on these big name employers, salaries were really high. And you also had a lot of specialty roles, people that were really focused on a particular technology or process. They were experts in that, and they could command a super high salary. As they go back out onto the market and maybe are looking at jobs at smaller companies that don’t have those specialized roles, they’re really not going to be able to command the same salaries.

Outside of layoffs, what will you be keeping an eye out for?

I think what’s so scary about the tech layoffs is that tech has been a huge driver of economic growth over the last 20 years. It was one of the engines that kept the economy going through the pandemic. Now, tech is sort of paying the price for some of that earlier success. The question is: if the rest of the economy slows down, as we expect sometime next year, will it have a soft landing or a hard landing? We don’t know yet. Are we going to have to hope for a recovery without the help of tech, or will tech have recovered enough by then to put his shoulder to the wheel?