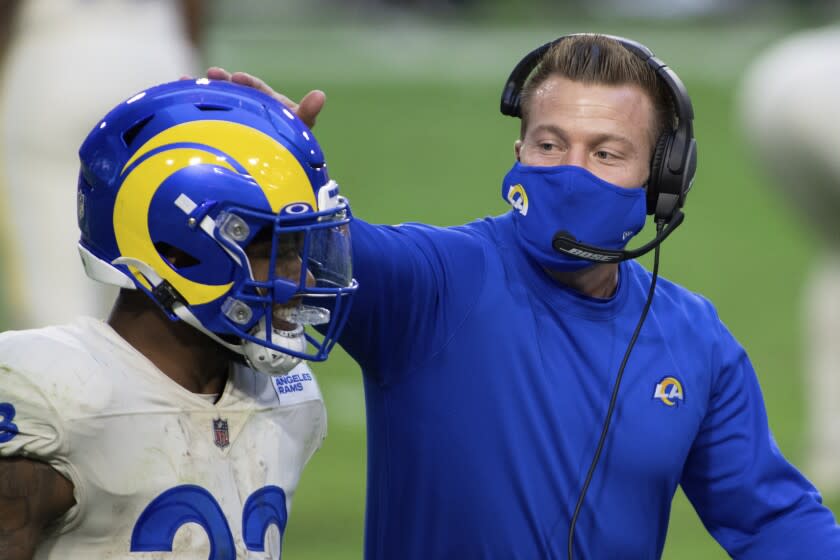 The veteran cornerback was happy for the players and coaches with whom he bonded during five seasons with the Rams before signing with the Cleveland Browns in 2021.

“It was a little tough on the other end too,” Hill said Monday, “because it was like it’s always that could, should’ve, would’ve type of thing.”

Hill, reacquired by the Rams on Saturday in a draft day trade, has no regrets about his decision to cash in and play for the Browns on a two-year deal that included $ 4.5 million in guarantees.

But Hill, 30, is ecstatic about rejoining the team with whom he established himself.

“I was excited about being able to come back out here and get some of this sunshine, things like that,” Hill said during a videoconference with reporters, adding that it was also a positive, “being able to come back, and seeing all these familiar faces, being traded to a team that I know what to expect. ”

The Rams traded for Hill moments after they selected South Carolina State cornerback Decobie Durant in the fourth round. The Rams also drafted Georgia cornerback Derion Kendrick in the sixth round to augment a position group that includes star Jalen Ramsey, fourth-year pro David Long and second-year pro Robert Rochell.

After trading for Hill – the Rams sent the Browns a 2023 fifth-round pick – coach Sean McVay said that “distance makes the heart grow fonder,” for a player who didn’t intercept a pass for the Browns but scored three touchdowns for the Rams in 2020.

A native of Youngstown, Ohio, Hill said his return to the state where he spent much of his childhood enabled him to reconnect with family and enjoy a rare Thanksgiving together. But Hill, who moved to Southern California as a teenager and attended Ventura St. Bonaventure High, sounded as if he longed for a return to the Rams.

“When I was in Cleveland, I always found myself trying to compare things to how it was done over here in LA,” he said, adding, “I don’t know if it was me just trying to compare as far as this is what a winning program [does]or if it was just missing everything that was happening over here. ”

Hill played the 2020 season for the Rams under former defensive coordinator Brandon Staley. He returned two interceptions and a fumble for touchdowns.

“In our secondary, everybody was capable of making plays,” Hill said. “You don’t want to be the weak link. So, I mean, that’s kind of what my mindset was. I always felt like once I had the ball in my hand, I could do something with it. ”

He said he was motivated to show that he was worth more than the fifth-round pick the Browns accepted to deal him.

Kendrick, speaking to Los Angles reporters for the first time, said he was looking forward to playing with Ramsey and other Rams defensive stars.

“That’s one guy that I look at about every day and model my game after,” Kendrick said of Ramsey, a three-time All-Pro. “Just because of his attitude, swagger, aggressiveness.”

Kendrick said he has grown from his experiences at Clemson and Georgia. Kendrick was removed from the Clemson program after the 2020 season, reportedly for repeated violations of team rules.

“Everybody has things they’ve got to work on,” he said. “I had to work on communication, and also maturing.”