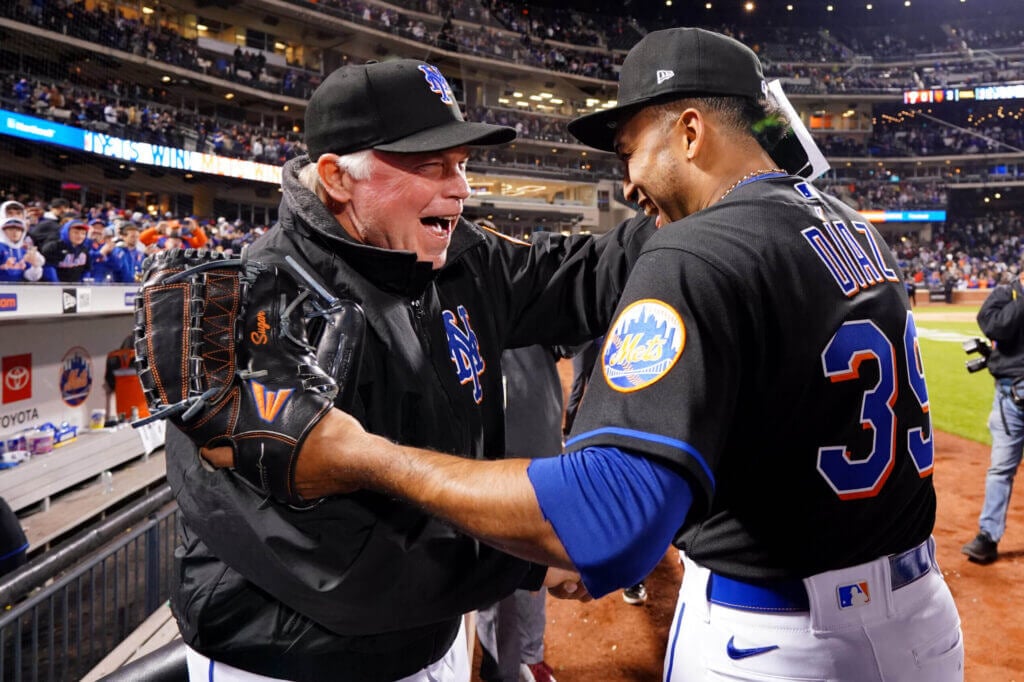 NEW YORK – On the morning after the Mets’ home opener, Buck Showalter asked general manager Billy Eppler to meet him in the dugout. Showalter had managed only one game at Citi Field, but already he had identified a design flaw. Showalter summoned Eppler to a nook by the steps closest to home plate. From this spot, his preferred location during games, the manager of the Mets could not see the Mets.

The specific problem was right field. A piece of padding obstructed Showalter’s view. The sightlines, pitching coach Jeremy Hefner would say later, “were atrocious.” During the previous two seasons it had irritated Hefner and former manager Luis Rojas, both first-timers in their jobs. Nothing had been done about it. Showalter had a solution, but it would take time. Until then, he still wanted to watch his right fielder.

Eppler clambered up some steps in the middle of the dugout and hung over the railing. He asked Showalter if that might work.

“Billy, how tall are you?” Showalter asked.

Showalter, 65, was listed at 5-9 during his playing days, but that was 40 years of gravity ago. He reminded Eppler of this. So he would have to squint around the padding while the ballpark operations staff was mocking up schematics for the fix: The Mets would build Showalter, Hefner and bench coach Glenn Sherlock a perch.

Thirteen days later, when the team returned to Queens with the best record in baseball, the dugout looked different. The staff had constructed a three-step incline to rise above the obstruction. Now Showalter could see his group, in full. And the rest of the public could see more of the ways Showalter, in his 21st season as a manager and his first season running the Mets, is subtly reshaping the club, one detail at a time.

The Mets hired Showalter last December to shepherd a team with championship aspirations. The group had underachieved for years. A $ 254.5 million November spending spree by owner Steve Cohen sent expectations skyward. In Showalter, Cohen hoped he had found a manager with gravitas, tactical acumen and the relentless daily drive that undergirds elite clubs.

In the opening weeks of his tenure, through an abbreviated spring training and just shy of two dozen games, Showalter has met that criteria, his players say. The Mets describe his mind as relentless. He quizzes his players on in-game situations, to gauge both their knowledge and their willingness to match his zeal. He salts wisdom with his western Florida drawl.

The Mets have learned to listen. A tip about an obscure rule from one of Showalter’s preseason meetings came to fruition during the first homestand. He has kept veterans in the loop about impending roster moves and encouraged them to dispense knowledge among younger teammates. He has preached the gospel of accountability. He has surprised some with his wit and willingness to laugh at himself. “He’s got a better sense of humor than I anticipated,” said Max Scherzer, the $ 130 million jewel of Cohen’s offseason.

If the Mets look different in 2022 – well, a lot of that comes from Cohen’s money. But some of it stems from Showalter’s mind. And if the ballpark looks a bit different, same story. It is not just the dugout. At Showalter’s urging, the team repainted the walls of the clubhouse and enhanced the lighting to brighten the space. The Mets also repurposed a closet into a private dressing room for support staffers. “We’re trying to tweak the baseball functionality of some things,” Showalter said.

The circumstances have compelled Showalter to move quickly. He took the job several weeks after the owners locked out the players. He could not contact any Met until the work stoppage ended on March 10. By then, Opening Day at Nationals Park was less than a month away.

Once the club gathered in Port St. Lucie, Fla., Showalter introduced himself through individual conversations and group meetings. He aired a series of videos that doubled as a blueprint for how he wanted the Mets to play and as a primer on how he saw the game. The videos, explained new arrival Chris Bassistt, showed “there’s not a detail he does not think about.”

Before each workout, Showalter addressed different rules. At one meeting, the team went over an arcane one that some, like six-year veteran infielder JD Davis, had never contemplated. Showalter laid out the particulars: Say the opponent was considering an appeal for a runner leaving the bag too early. In that situation, if there was a Met on base, the player should attempt to steal a bag. If the opponent reacted and tried to throw the Met out, that would negate their right to appeal.

A few weeks later, during a game against Arizona, Showalter’s vision played out. Davis was standing at first as the Diamondbacks debated appealing a sacrifice fly. Showalter signaled third-base coach Joey Cora. Davis caught Cora’s message and broke for second. Arizona veteran Oliver Perez stepped off the mound, which scotched the potential appeal, before throwing to third, which did not produce an out. The run held up. “Buck, with having so many years under his belt, he’s always trying to look for the edge, or look for loopholes,” Davis said.

Through Cora and first-base coach Wayne Kirby, who coached with Showalter in Baltimore, the Mets have instilled a newfound aggression on the bases. The group entered Sunday’s games ranked fourth in the sport, according to FanGraphs’ base-running metric. (They ranked 27th in 2021.) The attitude has also helped Showalter find common cause with his highest-paid player. On the team’s first road trip, Showalter thanked Francisco Lindor for his hustle in beating out a double-play ball. Lindor told the manager to rip him off if he ever loafed.

The manager and the shortstop forged a connection at spring training, when they discovered their visions aligned about Lindor’s 2022 season. Lindor appreciated when Showalter sprung to his defense after getting hit in the face with a pitch in Washington. The affection is visible when Showalter makes pitching changes, often greeted by little pranks from Lindor and fellow infielder Eduardo Escobar. Lindor might yank the zipper of Showalter’s jacket or fiddle with his ears. Escobar might dust off the skipper’s shoulders.

In Lindor, Showalter has found a superstar who can match his enthusiasm for the profession. The two debate and discuss the particulars of relays, bag coverage, situational decisions. At times, Lindor leaves Showalter at a loss. “It’s like ‘Stump the Manager,'” Showalter said. He added, “He’s one of those guys you go ‘Any questions?’ And he goes, ‘Oh, I got one.’ And you go, oh, shoot. ”

Far more often, Showalter occupies the Socratic role. He asks questions to keep his players engaged. He also asks questions to pass the time. One day recently, Showalter approached new outfielder Mark Canha. Showalter asked what Canha thought about the concept of a team error, a way of denoting a mistake had been made when no single individual was responsible, like when a pop-up fell in the infield. Canha considered a notion he had never before considered.

On a recent road trip, as young pitcher David Peterson finished up a strong outing, Showalter found Bassitt and Scherzer in the dugout. Showalter told them Peterson would soon be demoted to the minors, to make room for an extra reliever. He wanted his clubhouse leaders to understand his rationale, knowing they could advise Peterson on how to accept it. “Buck,” Bassitt said, “is unbelievable at just keeping everyone in the loop.”

These are qualities, of course, that Showalter displayed with the Yankees and the Diamondbacks and the Rangers and the Orioles. Those managerial tenures ended the way managerial tenures tend to end. But these qualities may also make Showalter, as one Mets official put it, “the exact right man for the job,” after the inexperience of Rojas and the lecherous incompetence of Mickey Callaway.

The changes initiated by Showalter are already apparent. During the first homestand, he spoke with vice president of ballpark operations Sue Lucchi, executive director of ballpark operations Peter Cassano and executive director of field operations Bill Deacon about the dugout. The perch was in place when the team returned from the road. It provided Showalter with a clear vision of history on Friday night. Facing the high-powered Phillies offense, the Mets authored a combined no-hitter, a five-man effort in which only one, closer Edwin Díaz, realized the stakes.

Showalter was finishing his postgame news conference as Díaz and the other pitchers entered the room. Showalter pushed back his chair and stood. The Mets intended to let all five pitchers, plus catcher James McCann, conduct a joint presser.

“We got enough chairs for them?” Showalter said as Díaz, Seth Lugo, Joely Rodriguez and Drew Smith walked to the stage. “It’s like the Jackson 5 here. Earth, Wind and Fire. ”

Showalter helped arrange the seating. The relievers were waiting for McCann and starting pitcher Tylor Megill. The manager stood behind them. “This is how you get a cheap Christmas card right here, boys,” Showalter said.

“You are not going to wait on Tylor?” Showalter said.

There was a brief discourse about the nature of deadlines. It was past 11 pm After a beat, McCann and Megill arrived. A few photographers steadied their lenses. Showalter could not be found in the frame. “I’m getting out of here,” he said. He was already exiting the room, his work for the night done, his mind racing toward tomorrow, his influence clear.