5 things to watch as Jets face Bears in Week 12 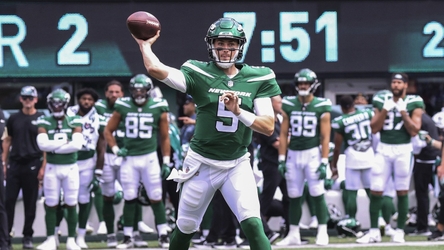 The events of the past few weeks underline how quickly things can change in the NFL.

After heading into the bye week with a statement win, the Jets are making a quarterback change despite still being in the thick of the AFC playoff race. They’ll need to beat the Chicago Bears on Sunday to stay in the mix, though.

Here are some of the biggest stories to watch as the Jets look to bounce back from their dramatic loss to New England:

Will the offense function more effectively with Mike White at the helm?

After a rocky performance in New England, the Jets have decided that Zach Wilson needs what they’re calling “a reset.” Wilson was benched and Mike Whitewho himself was only promoted to number two a few weeks ago, is going to get another chance to be the starter – for now.

How permanent this move will be likely depends on how effective the offense can be and whether or not White plays well enough to give them a chance to win.

They will probably continue to adopt a conservative approach but could also sprinkle in some gadget plays as they did when White saw action last season. For White, who doesn’t have Wilson’s elusiveness and mobility, the key will be to get the ball out quickly and to limit mistakes.

What will the Bears quarterback situation be?

The Bears are also facing some uncertainty at the quarterback position Justin Fields reportedly suffered a separated shoulder to his non-throwing arm in last weekend’s game. He has been practicing on a limited basis, but his availability for Sunday’s game will depend on how he feels leading up to it.

The Bears might be reluctant to put their franchise quarterback in harm’s way against a formidable Jets front in an essentially meaningless game. They could instead turn to ex-Jets quarterback Trevor Siemian.

What was looking like a mouth-watering matchup between two second-year passers a week ago could therefore end up taking on a very different look. Siemian vs. White somehow doesn’t quite have the same significance as Fields vs. Wilson would have in NFL circles.

If Fields does play, it’s worth noting that he leads the league in fumbles. However, the Jets have the second-lowest fumble recovery rate in the NFL this season.

Can the Jets get their running game going again?

The Jets couldn’t get anything going on the ground in New England, despite their success leaning on the running game down the stretch in the win against the Buffalo Bills.

What kind of success can we expect them to have against a Bears defense that has given up the third-highest yardage total in the league?

Without Breece Hall and Alijah Vera-Tuckerwho both suffered season-ending injuries last month, the running game has not been as dominant or consistent. Michael Carter has averaged less than four yards per carry in seven of the first 10 games and James Robinson hasn’t really gotten going since his arrival via trade from Jacksonville.

The Jets will need one or both of them to step up.

Will a lack of depth on defense hurt the Bears’ chances?

Only five Bears players have played over 500 defensive snaps this year and they could be without three of them on Sunday. Linebacker Roquan Smith was traded to the Baltimore Ravens and rookie defensive backs Jaquan Brisker and Kyler Gordon didn’t practice this week due to concussions.

The Bears have given up the sixth most points in the league even with those players involved, so the Jets will definitely be expecting a more significant output than they managed in New England last weekend.

Who will win the battle on special teams?

The Jets have had one of the better special teams units in the league for the past year or so, but are coming off a game where a breakdown in punt coverage cost them the game.

They’re also heading into a matchup with a team that has one of the better special teams groups in the league, according to analytical sites like Football Outsiders and Pro Football Focus.

Braxton Berrioswho was an All-Pro last season, hasn’t been as productive in 2022. Teams have successfully found ways to limit his impact at a time when a big return could potentially spark a struggling offense.