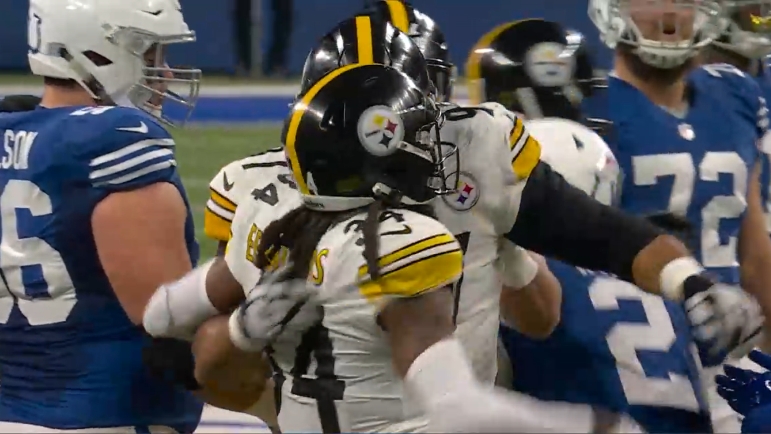 Now that the Pittsburgh Steelers’ 2022 season is over, the team finished above .500 but failed to make the postseason, we turn our attention to the offseason and everything that means. One thing that it means is that some stock evaluations are going to start taking on broader contexts, reflecting on a player’s development, either positively or negatively, over the course of the season. Other evaluations will reflect only one immediate event or trend. The nature of the evaluation, whether short-term or long-term, will be noted in the reasoning section below.

Reasoning: The fifth-year veteran safety provided a greater consistency and stability at the position this season than he had at any other previous point in his career. After playing out a one-year contract for a four-year veteran qualifying offer, he could potentially land a more long-term deal this offseason as a reward.

The Steelers had their eye on three safeties last year: their own Terrell Edmunds, Damontaze Kazee, and Tyrann Mathieu. They got the two who came nice and cheap; they likely hope to retain both of them this offseason.

It might not be as cheap, although the market will ultimately have to determine that. Edmunds, a former first-round draft pick who has always lacked the ‘flash’ in his game that draws one’s attention, put together arguably his most consistent season this year, even if the stat line might begin to differ.

Although affected by the team games that he missed, Edmunds’ 70 tackles are a low total for a strong safety, although he did have three tackles for loss. He did have two sacks, and recorded five passes defended, even if he lacked for an interception, but this may have been his best year in coverage overall when it comes to assignment discipline.

Edmunds’ best, however, is not exactly Troy Polamalu, so we’re not talking about somebody who will break the bank. I don’t consider myself the best at predicting the market, but I’m inclined to believe that he will remain in Pittsburgh’s price range.

The safety market this year will be fairly robust, or at least potentially depending on what teams decide to do with franchise tags, but one name that will be out there is Jessie Bates III, who played under a tag with the Bengals in 2022. Their Another starter, Vonn Bell, is also a pending free agent. Other notable names include Jordan Poyer, Jimmie Ward, and Johnathan Abram.

One advantage to retaining Edmunds would be the rapport that he has with Minkah Fitzpatrick, with whom he has played since 2019. They were drafted in the same year in 2018 as first-round picks, and the Steelers brought the three-time first-team All-Pro Fitzpatrick to Pittsburgh a year later. He has never missed an opportunity to advocate for Edmunds’ long-term retention.