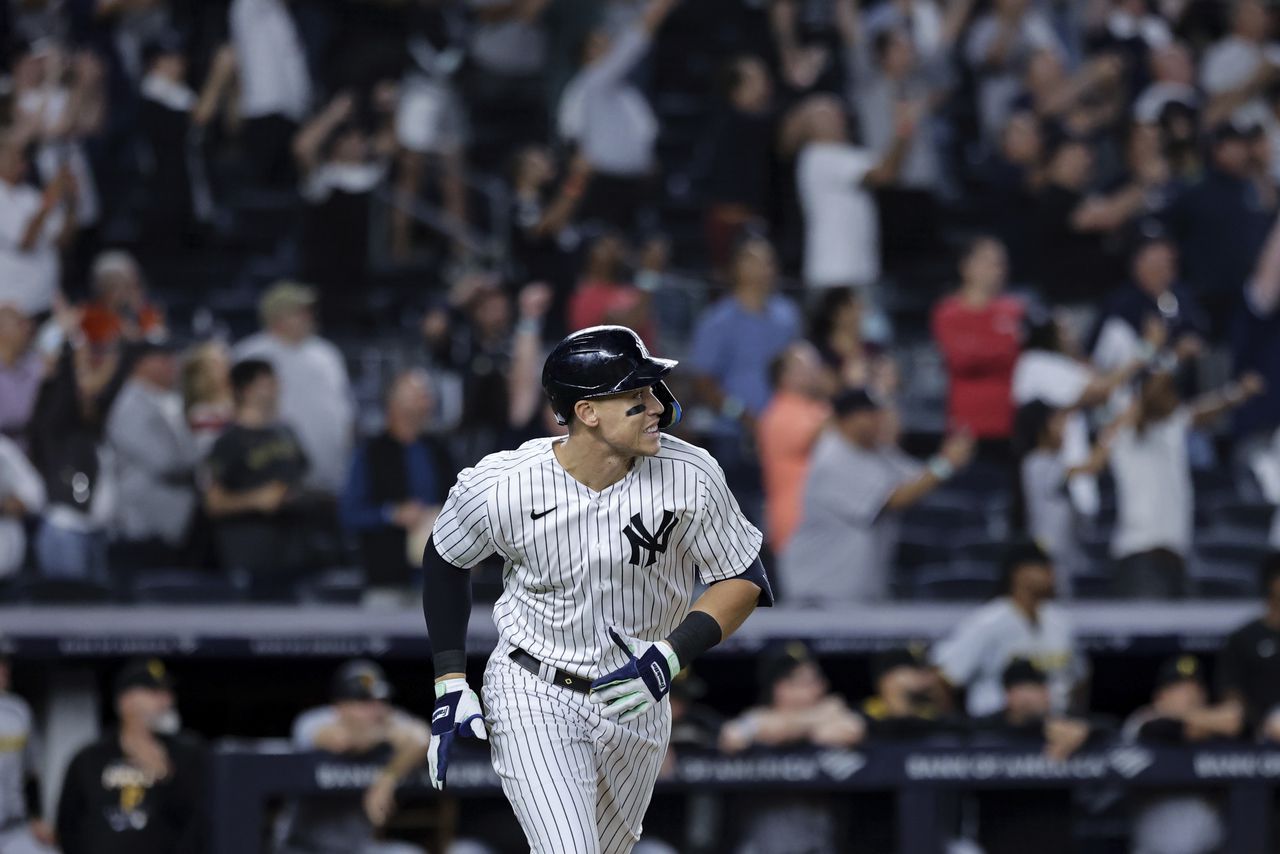 This week started on a downer, with the Los Angeles Dodgers seemingly entering the mix for free-agent slugger Aaron Judge after non-tendering Cody Bellinger.

It continued with Judge returning to the Bay Area to visit his hometown San Francisco Giants.

But there seems to be a silver lining for New York as the week draws to a close. The New York Post’s Jon Heyman reports “The Giants are clearly gung-ho in their efforts and said to be ‘elated’ by their visit this week with Judge, but the idea they hold an advantage as his ‘hometown’ team seems specious.”

In addition, Heyman reports the Dodgers “seem interested in reducing their $290 million payroll and also could use a shortstop.”

That led Heyman to conclude the Yankees “hold edges for Judge in legacy, ballpark and familiarity.”

“Now I’m told it was a day of multiple meetings. I’m told that the meetings went all the way up to the ownership level between Aaron Judge and the San Francisco Giants, so a very significant development there. There were a lot of conversations for Aaron Judge with the Giants, of course going back to his home state of California and the team he grew up following.

“Now we know this, and I don’t have all the details of everybody that he spoke with, but when you consider the thoughtfulness of the Giants and their long history and the number of icons they’ve had over time, it would not surprise me if the Giants really organized this to consider and go back to Aaron’s emotions as a long-time fan of the franchise. And perhaps even including some of his favorite players as a kid, who might well have been able to meet with him yesterday.

“So again I’m told it was a very productive meeting. I don’t think right now, guys, that there has been an offer made yet. But I do expect that could happen within a week, where there’s a formal offer made from the Giants to Aaron Judge. And the general pace of things, we know where the Yankees stand, we know they’ve had a conversation with him since the season ended, Aaron has a pretty good understanding of where the Yankees stand with what they’ve done with the previous offers and where things stand right now.

“I believe that once Aaron Judge knows where at least the initial Giants offer comes in, and I do believe one is forthcoming, that there will be a fairly robust conversation to where we could see Aaron Judge signing with a team within the next two weeks , by the end of the Winter Meetings. So I think that’s kind of where we stand here, where this is not going to be a February decision. I would expect this to be a December decision and it could even happen before the end of the Winter Meetings in his home state of California.”

As part of their pitch, the Giants put Judge in touch with Steph Curry’s camp, hoping that the two superstars could connect as Judge weighs his decision, sources told NBC Sports Bay Area. … Judge arrived in the city Monday and met with Giants officials for two days, with conversations kicking off Monday night at Oracle Park, where Judge and his agent had dinner with CEO Larry Baer, ​​president of baseball operations Farhan Zaidi, manager Gabe Kapler and other members of the organization. The Giants continued to meet with Judge for most of the day Tuesday.

Also on Tuesday, Giants two-time All-Star outfielder Joc Pederson turned to Instagram in an attempt to woo Judge. Per the New York Post:

“I got 99 problems… winning ain’t one. We’re ready when you are @thejudge44,” Pederson wrote, referring to Judge’s jersey number and the famous Jay-Z song “99 Problems.”

The post included a photoshopped image of Judge in a Giants uniform.

Pederson also wrote“We’re ready when you are 99.”

Want to bet on MLB?

The Giants were the first team, other than the Yankees, to sit down with Judge, who rejected a seven-year, $213.5 million contract before Opening Day and became a free agent after the World Series.

San Francisco has signaled it will be all-in on Judge, who set a new American League record with 62 home runs while contending for the Triple Crown this season.

The Giants have targeted Judge and are prepared to spend whatever it takes, a person with knowledge of the Giants’ thinking told NJ Advance Media after a meeting with members of the franchise’s ownership group. The person, who isn’t authorized to speak on behalf of the team, was granted anonymity.

“Judge is at the top of the Giants list and they won’t be underbid,” the person said. “If they miss out, it won’t be because of money.”

The person added that the Giants planned to entice Judge further by signing at least two high priced free agents.

“The Giants are not going to stop with Judge,” the person said. “They have so much money freed up.”

Earlier this month at the GM Meetings in Las Vegas, Giants president of baseball operations Farhan Zaidi said ownership has given him “no explicit ceiling” on how much he can spend this winter.

“I think from a financial standpoint there’s nobody that would be out of our capability,” Zaidi said. “And then it’ll just be a question of whether there’s mutual interest and how we put together the best possible team.”

Yankees general manager Brian Cashman said last week that the club made a new offer to Judge. “We’re in real time, so we’re on the clock,” Cashman said. “We’re certainly not going to mess around.”

“I’ve absolutely conveyed that I want him to be a Yankee for the rest of his life,” Steinbrenner told reporters at last week’s owners meetings. “No doubt about that. He knows that.”

Thank you for relying on us to provide the journalism you can trust. Please consider supporting us with a subscription.

Mike Rosenstein may be reached at [email protected].