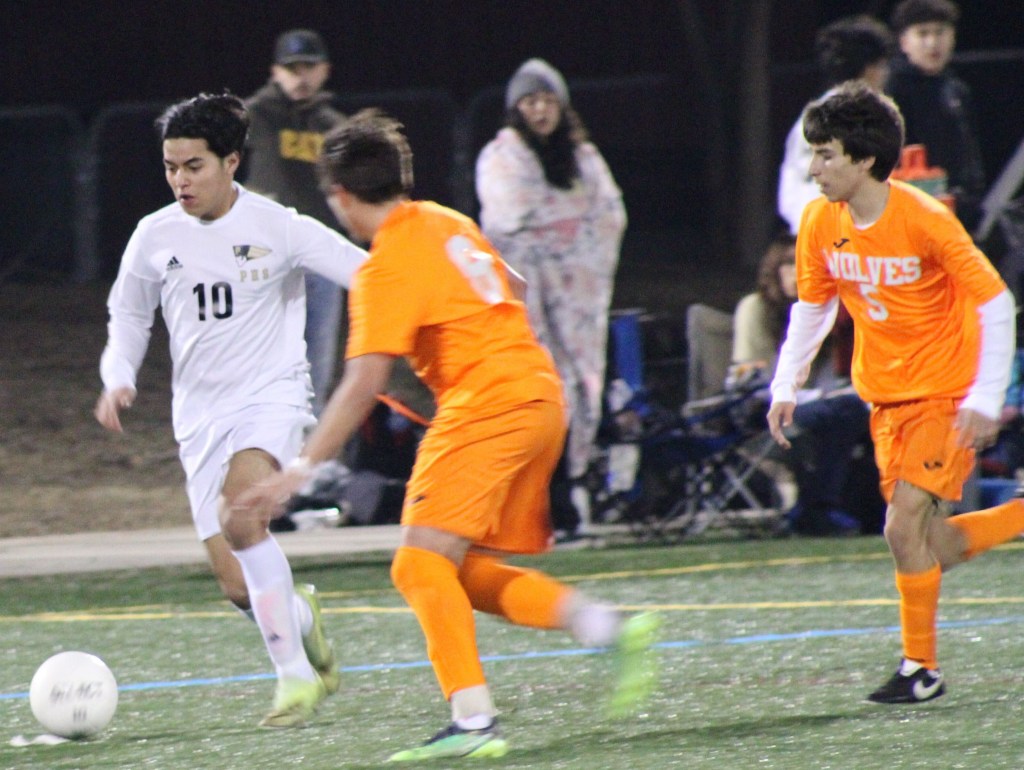 After starting the season winless in their first six games, the Wolves have returned to .500 with a 5-5-1 overall record. Woodland is now 5-2-1 in Golden Empire League play, a half game behind the Patriots (6-4-1, 5-2) for second place in the GEL.

“They’re slowly believing in themselves and that’s what I told them and what my other coach said at the beginning of the season,” Araiza said. “Coach Olmedo has been of great help. He’s been coaching for over 20 years and he brings that positivity. We tell them, ‘you guys are talented, you guys just have to believe in yourselves and play as a team.’ They’ve been doing that and it makes us happy as coaches.”

Tuesday night’s game was a stalemate for most of the match, tied at zero. Both teams had multiple opportunities to score but were unable to convert.

The game’s only goal came with about 10 minutes remaining. Woodland junior defender Emmanuel Marquez had a free kick opportunity on the left side of the field almost at the centerline.

Marquez blasted the kick from about 50 yards out. The shot was perfectly placed as it snuck under the cross bar and narrowly over the keeper’s outstretched hands for the score.

“Manny has a cannon,” Araiza proclaimed. “At the beginning of the season, I don’t know if he wasn’t feeling it, but ever since he’s been playing, he’s been scoring goals like this. He has the shot and now he’s taking them. We got that W because of him.”

Araiza earned the shutout with two goalkeepers once again on Tuesday. Junior Alejandro Navarro played the first half and senior Christian Lomeli played in the second half. Araiza said he plans to continue doing so regardless of matchup if both players continue to compete hard in practice.

Both teams will have an opportunity to continue climbing the GEL standings this week. Woodland will host first-place Rio Linda (9-6-2, 6-0 GEL) on Thursday at 6 p.m.

“Right now we’re at a point where they can get comfortable,” Araiza said. “They win a big game, all of a sudden they start to get comfortable and then we lose against teams that are an easier opponent, a team that we were supposed to beat. Just making sure they’re grounded and that we still have a long season.

“We have four more games and then the playoffs so we cannot underestimate any team.”

“A lot of times we had the ball, we looked to go long instead of trying to touch the ball, connect a lot more,” Hernandez recalled. “Very slow-paced. In my opinion, this field, since it’s more narrow than the other one, helps out Woodland a lot more to their style, so we struggled.”

The Patriots will travel to Mira Loma on Thursday for a road matchup against the Matadors (3-4-2, 1-3-1 GEL) at 3 pm The following day, Pioneer will return home to host the top seed Knights at 6 pm

“If these guys are the players they say they are, they take this loss and should be mad. Learn from this experience,” Hernandez said. “Luckily we have the film, they look back, look at the game and see what we saw from outside the bench.”