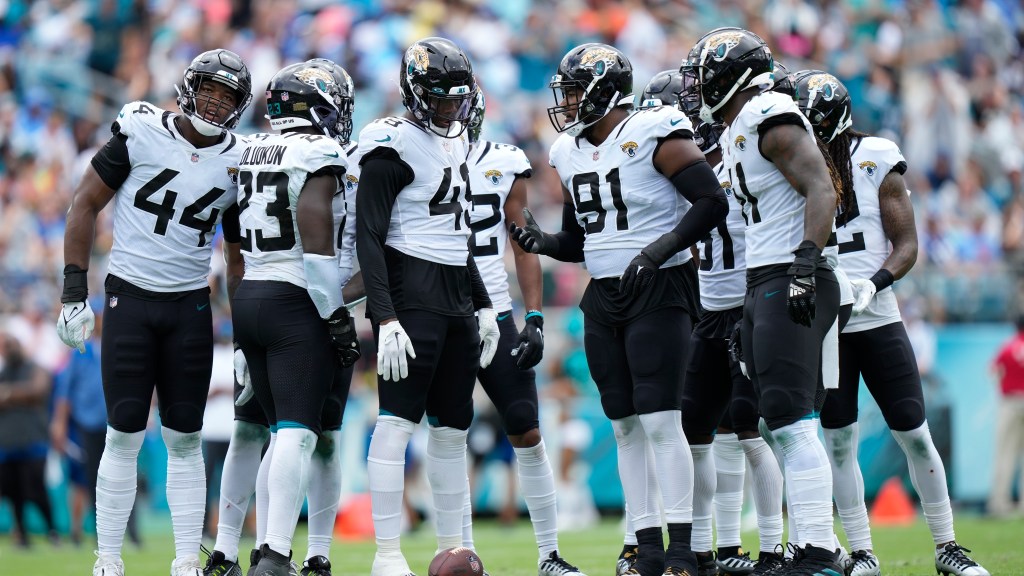 When talking about the culture change in Jacksonville, most of the discussion is on the offensive side of the ball, and how new head coach Doug Pederson has made things easier and better for Trevor Lawrence and all his targets.

There is of course a lot to that — it’s hard to do worse than it was done last season with Urban Meyer “in charge,” and the two-headed monster of Darrell Bevell and Brian Schottenheimer calling the plays.

But it’s Jacksonville’s defense we should be looking at more often. Last season, the Jaguars ranked 31st in Defensive DVOA. This season, through two games, that defense ranks third, behind only the Bills and the Buccaneers.

Yes, the addition of first-overall pick Travon Walker to the defensive line has helped a lot, but there are a lot of the same guys on that roster as there were last season, along with key acquisitions in the draft and in free agency. First-year defensive coordinator Mike Caldwell is clearly dialing things up well — our own Laurie Fitzpatrick recently wrote about that defensive front, and how it’s bringing “Sacksonville” back to Duval County.

But there is a hidden advantage the Jaguars are bringing to the field this season, and it’s confusing a lot of people. Robert Mays of The Athletic recently pointed this out.

Yes, we are talking about jersey numbers.

The Jaguars are taking full advantage of this. They announced new jersey numbers for several of their players at the beginning of September. So, if you were scouting safety Andre Cisco as No. 38 in the preseason, and you’re now looking at Andre Cisco as No. 5? I don’t care how smart you are, that’s going to create a second of hesitation.

Why would it be an advantage for a defense? When you are a quarterback, and you’re reading a defense before and after the snap, you’re using jersey numbers to a greater or lesser degree to identify who is where, doing what. You’ll hear quarterbacks identify is the MIKE pre-snap, and that’s one of the many things that helps define protections.

Some quarterbacks aren’t evolved enough in their processes to transcend this. And if Tom Brady is talking about how it mucks things up… there’s something to it.

“The number rule is crazy,” Brady said last September, via the Tampa Bay Times and NFL.com. “Literally, guys changed their numbers today. I’m playing two guys who had different numbers in the preseason. So, yeah you’ve got to watch the film and know who you’re studying but so do running backs. They’ve got to know who to block. So does the offensive line. So does the receivers who are adjusting their routes based on blitzes.

You can argue that college players have to deal with this all the time, but college players haven’t been in a process for 10-20 years, the offenses and defenses aren’t as complex. This would also be true of the NFL preseason. There are far more players, and a lot of guys are just running around trying to make rosters in radically truncated schemes. Brady’s death grip on his own process might put him at an odd disadvantage in this case. This might also be true of other supercomputer quarterbacks.

“There’s a reason why you do every single thing in football,” Brady concluded back then. “And you study hard so you can put yourself in a good position. Now you get to the game, and you’re going to be confused the whole time because you’re rotating what a D-lineman used to look like versus a linebacker or here is what a safety looks like. Very pointless.”

Back then, Brady also mentioned that it would be as if offensive linemen were allowed to wear, say, No. 82 and no. 9. Brady brought up the entirely legitimate point that you wouldn’t know who was eligible and who wasn’t, which is why the NFL might be more hesitant to go all crazy quilt on that side of the ball.

But it’s definitely something to think about. Because throughout the history of pro football, when defenses have any sort of advantage, those in charge of the rules have tended to do whatever they can to push things back to at least the middle.