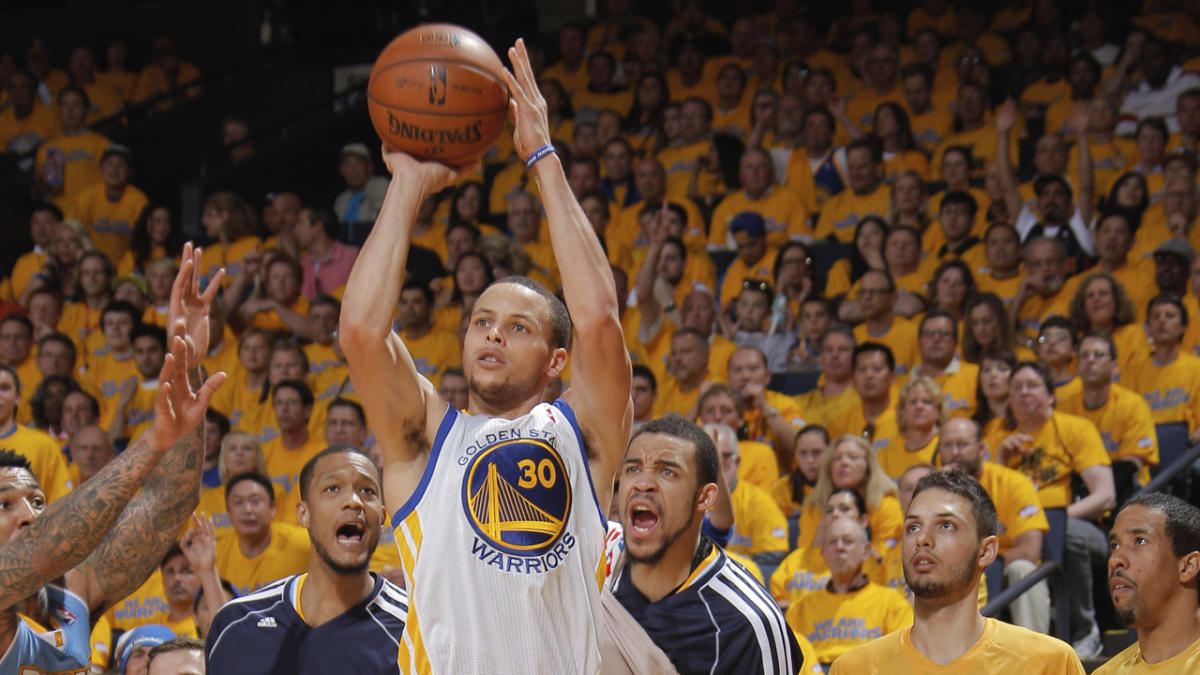 It’s a move Dub Nation — and the rest of the NBA world — has come to expect from Warriors star Steph Curry.

The Splash Brother fires a shot from behind the 3-point line and, with the confidence of an esteemed archer, turns around before the ball drops through the net. What tends to follow is a harrowing look at his opposition or an encouraging gesture towards the crowd, as Golden State tallies three more points to its total.

Curry’s famous no-look 3-pointers are certainly a crowd pleaser, but when did he first bring the phenomenon to the court? The reigning NBA Finals MVP recently shared the trademark moment’s origins during an appearance on “The Old Man and the Three” podcast, and it turns out the Denver Nuggets were the first to be on its receiving end.

“I want to say it was either Game 3 or Game 4 of our first playoff series against Denver in 2013,” Curry told hosts JJ Redick and Tommy Alter. “It was the third quarter. I went on this crazy run, I think I had, like, 20-something in the quarter, and one of the last three was right in front of Denver’s bench.”

Curry explained how he had heard tales of just how loud Oracle Arena could be during the NBA playoffs. The “We Believe” Warriors had the place rocking in the postseason just a couple of years before Curry was drafted, and the point guard found the rumors to be true when Golden State returned to the playoffs in 2013.

“We were the sixth seed, so we started in Denver then came back … You walk out and there’s this haze over the court, fans like 75 percent full 20 minutes before tipoff,” Curry said. “They’re chanting Warriors, got a nice aroma in the building. It was just an amazing atmosphere, so you kind of get wrapped up in that.”

Then came the third quarter.

“[I was] knocking down shots left and right, and the last one in the third quarter was right in front of Denver’s bench,” Curry continued. “JaVale McGee is standing up, five or six guys around him. And I got the ball in the corner — obviously you’ve [Redick] been in that situation where you wake up and everybody’s just talking trash behind you.

“And for some reason, I just got an out-of-body experience. I shot it. Literally, as I let it go, I was like, ‘I’ve never felt a shot feel better than that.’ I turned around and kind of looked at JaVale and then just ran off and it went in.”

Curry didn’t even need to look and see if he had sunk the shot — the crowd let him know.

“It was kind of a really special moment,” Curry said. “Just, I don’t know, the irrational confidence to even try it in a playoff game. But it was dope.”

RELATED: Kerr explains why Steph is ‘unlike anyone on earth’

But has he ever turned around to flaunt a shot that didn’t go in?

“Yes,” Curry smiled. “I’m sure someone could put a YouTube compilation of that together.”