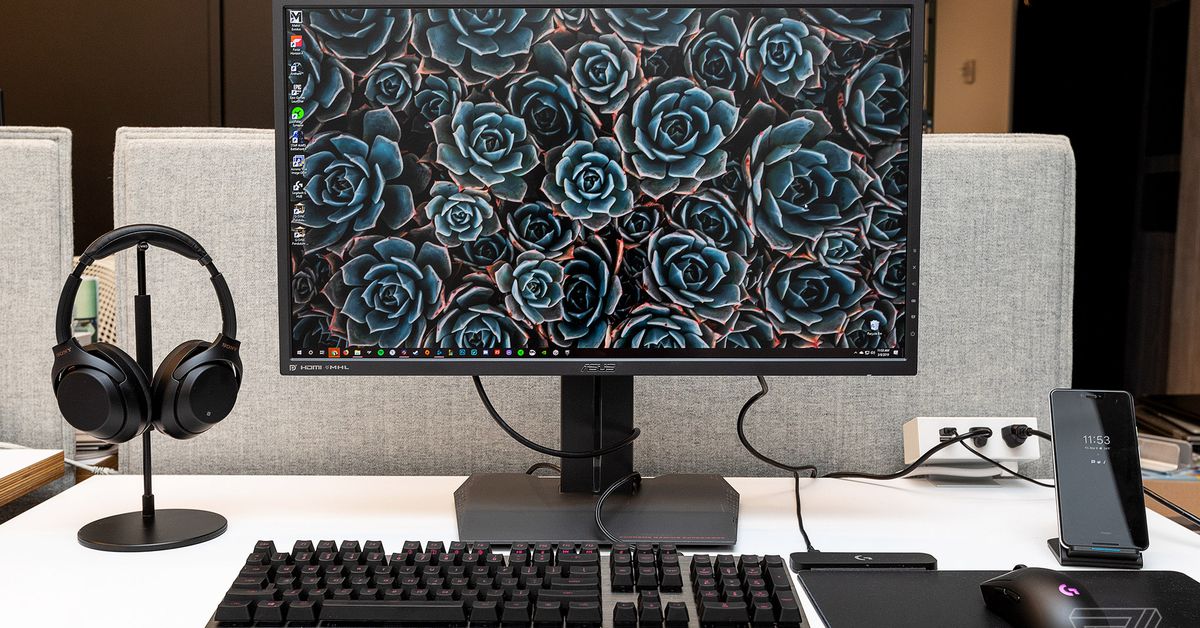 Variable refresh rate (VRR) is a technology that allows a display to synchronize its refresh rate to the output of whatever device is plugged into it, reducing the appearance of visual artifacts, screen tearing, and frame pacing issues. When support for VRR first started appearing on graphics cards and monitors, it tended to be tied to specific manufacturers: G-Sync for Nvidia and FreeSync for AMD. But in 2014, VESA built native Adaptive-Sync support into DisplayPort 1.2a based on tech provided by AMD, and now it’s a standard that’s cross-compatible with graphics processors from all three major manufacturers: IntelAMD, and Nvidia.

Nvidia and AMD already have certification tests for their own standards

Both Nvidia and AMD have long offered their own certification schemes for VRR displays using their proprietary standards, but it’s more of a wild west when it comes to the open Adaptive-Sync standard. When Nvidia started testing Adaptive-Sync monitors back in 2019 as part of its “G-Sync Compatible” initiative, only 5.56 percent of the models it tested actually passed. They either didn’t offer a broad enough range of refresh rates or had other image quality issues like flickering.

VESA’s new certification is designed to offer similar assurances about a monitor or laptop’s Adaptive-Sync support. But unlike Nvidia or AMD’s certifications, it’s an open source industry standard, and its testing criteria are public.

“There’s obviously proprietary standards from the GPU vendors, but they’ve never disclosed the full extent of their tests,” Roland Wooster, Intel engineer and chairman of the VESA task group that came up with its new test, tells me over a Zoom call . Look at Nvidia’s website, for example, and you’ll see that it says a monitor needs to go through over 300 tests to earn itself a G-Sync logo, but it’s less forthcoming about exactly what these tests are. And that’s generated some confusion over the years, particularly when it comes to criteria like “Lifelike HDR.”

“They’ve never disclosed the full extent of their tests”

Importantly, VESA’s Adaptive-Sync tech is only available for its own DisplayPort standard, which is used across monitors and laptops (including whenever you transmit video via USB-C). Unfortunately, it’s not going to help you pick out one of the increasing numbers of TVs that offer VRR support via HDMI 2.1 where standards are even more of a wild west.

But, as well as being more public, Wooster suggests that VESA’s new certification standard holds displays to a higher standard than these vendor-specific certifications. “We’ve seen some monitors that have met those certifications that have flicker, that have jitter, and which don’t meet the gray-to-gray specs that we have here,” he says. In a follow-up email, he tells me he expects significantly less than half of the Adaptive-Sync monitors on the market to meet VESA’s standards, similar to what Nvidia found when it introduced its own certification for Adaptive-Sync displays.

Under VESA’s certification, there are two compliance logos that displays can earn. MediaSync is meant for monitors you might use to watch videos or use for content creation, while AdaptiveSync is aimed at gaming monitors. If their device passes these tests, manufacturers are allowed to plaster the relevant logos across the product’s box, website, or wherever it thinks potential customers might see it. A display that fails the tests can’t use the logo, but manufacturers don’t need to disclose a failure publicly.

The first of the two logos is called MediaSync. The focus here is on making sure monitors are able to play back video content – with less than 1ms of jitter – at each of the 10 major international frame rate standards (23.976, 24, 25, 29.97, 30, 47.952, 48, 50, 59.94, and 60fps – where 23.976 has often been typical for film content in America). It sounds like a simple ask, but 24fps content can have real problems when playing on 60Hz displays because the frames don’t divide evenly into the refresh rate of the screen. Three-two pull down was a common way of dealing with the problem (where the first frame is displayed twice, the second thrice, the third twice, and so on), but it can create unpleasant juddering. A MediaSync logo means a monitor can use Adaptive-Sync to avoid any such issues.

The second is the AdaptiveSync logo, which is aimed at high refresh rate gaming monitors. So for starters, a monitor with an AdaptiveSync logo needs to be able to run at a maximum refresh rate of 144Hz or more at native resolution in factory default mode, and its adaptive refresh rate needs to be able to go down to 60Hz. That might not seem like a very low floor, but Wooster explains that if your frame rate drops lower, to 58fps for example, then a monitor would be expected to use frame-doubling to bring it up to 116fps and bring it back into its adaptive sync range.

If a monitor can reach 144Hz, then you’ll see a “Display 144” box to the right of the certification logo, but Wooster tells me that this number will reflect whatever a monitor’s maximum refresh rate is – whether it’s 144, 240, or 360Hz – at native resolution.

A thorough and open approach

VESA is also taking a detailed approach to how it measures response time, or the time it takes for a monitor’s pixels to update. Across the industry, it’s common to see this expressed as a “gray to gray” response time, or roughly the time it takes for a pixel to change from one shade of gray to another. If response times are too slow, monitors can exhibit “ghosting,” where the remains of a previous image are still visible on a screen as the pixels struggle to keep up. In order to get an AdaptiveSync logo, a monitor will have to have a response time of under 5ms.

5ms might seem high compared to the 1ms response times that a lot of manufacturers claim their monitors are capable of. But in real-world tests, like those conducted by Rtingsresponse times are generally a lot higher than 1ms. Rtings generally classes any response time of under 6ms as a “good value.”

Manufacturers like to make these claims about 1ms response times because they’re not being as rigorous with their testing as independent reviewers like Rtings or VESA’s test centers. Some manufacturers, Wooster says, might perform a number of gray-to-gray changes and then cherry-pick the best result. Others might benefit from the fact that a warmer panel can respond markedly quicker than a cold one. Overdrive might be used to achieve a faster response time on paper but at the expense of ugly visual artifacts.

VESA’s solution is to measure a variety of different gray-to-gray transitions (20 in total) and to take an average, rather than cherry-picking the best result. Tests are conducted with an ambient temperature of between 22.5 and 24.5 degrees Celsius (72.5 – 76 Fahrenheit). Monitors are given time to reach a stable temperature first, and limits are placed on how much overshoot and undershoot a monitor is able to show and still pass.

Wooster declined to say how many VESA members he expects to pay for their devices to eventually be MediaSync or AdaptiveSync certified (the fee is the same whether a display passes or fails), but the first certified monitors should appear on VESA’s website starting today. He points toward the number of devices that currently carry one of VESA’s HDR certifications as an example of the amount of monitors and laptops we might eventually see carrying the new AdaptiveSync logos.

Considering VESA’s formidable list of members from across the display industry, these little orange and blue logos could quickly become an essential mark of quality when buying your next monitor or laptop.