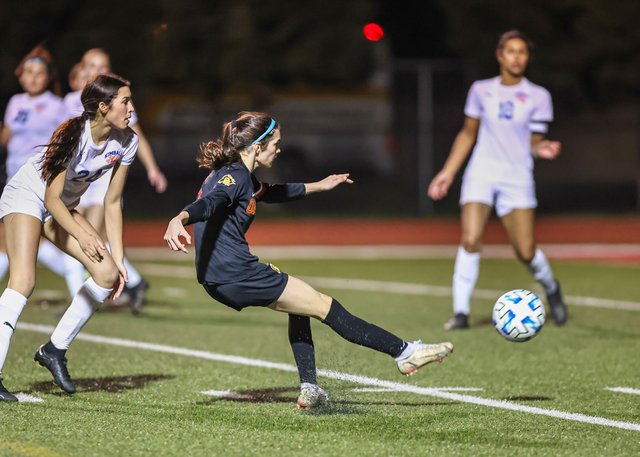 On a week that began with a 1-1 tie against the Manteca Lady Buffaloes in Manteca, the Oakdale varsity Lady Mustangs soccer team (11-0-2; 3-0-2 VOL) ​​defeated the visiting Kimball Jaguars on Friday, Jan. 20 in the Corral. The 2-1 win earned the Mustangs of head coach Kico Monares and assistant coach Tiffanie LaVelle, first place in the Valley Oak League, a half-game ahead of Manteca.

The Mustangs appeared to come out a bit tentatively in the opening 20 minutes, looking sluggish in front of the home fans. But then, in the 30th minute of the 40-minute first half, senior midfielder Trista French, on a feed from junior forward Mia Peterson, scorched a shot past Kimball goaltender Gbo Tamayo for the opening goal of the match and the only score of the game. first stanza.

From that point onward, the Lady Mustangs appeared to pick up steam and clearly outplayed the very good Kimball team, beating the opposing players to balls, executing excellent passes, and, led by sophomore goalkeeper Avery Alves, playing stingy defense. In the sixth minute of the second half, junior Kyndra Obermeyer, also on a feed from Peterson, punched through what would amount to the winning goal of the match. The Oakdale girls had several other scoring opportunities, but they were turned away by Tamayo’s excellent goal keeping. In the 22nd minute of the second half, Kimball’s Mia Laval was able to garner a goal amid a swarm of Jaguars in front of the Mustang goal following a corner kick.

Obermeyer was animated in her assessment of the Mustangs’ performance following the match.

“In the past, Kimball has been hard to beat,” said the three-year varsity forward. “This year we have the mindset that we don’t have anything to lose and we’re training for those top teams that we haven’t been beating in past years. Everyone has come together, and we feel like this is the year for us.”

French agreed with Obermeyer as both players acknowledged the excellent coaching of Monares and LaVelle.

“They have honestly done everything for us,” said the four-year varsity player. “They push us to be the best every single day. They both know so much about soccer. I think we’ve really come a long way since my (first year). This year is definitely our year. I think we are going to do great things. I am excited.”

Earlier in the afternoon, the Mustang JVs battled to a 1-1 tie with the visiting Jaguar JVs. The Mustangs played at home on Monday, Jan. 22 against Sierra, past sports press time for The Leader. Their final home game will be Senior Night on Wednesday, Feb. 1, against the Manteca Buffaloes and they are looking to keep the wins coming as they aim for a strong postseason run.

The match also served as Senior Night for the Mustangs as the team honored their nine seniors along with their parents and other escorts prior to the game. Honored were goalkeeper Jebb Foxx, center back Khrystian Escalante, defender Alex Martinez, forward Christopher Diaz, left back Jayden Courtney, midfielder Angel Pineda and defender Lucas Ryan. Seniors who were unable to attend the match were Alfredo Fernandez and Nicholas Cazares.

Earlier in the afternoon, Sierra defeated the Mustang JVs by a 5-0 score.

Tuesday, Jan. 17 action for the squads saw the varsity boys take a 6-3 loss to Kimball with goals from Diaz, Abraham Isidro and Krause, with two assists from Fernandez and one from Diaz. The JV boys played to a 1-1 tie with Kimball in the Tuesday match.

The Mustangs will play their remaining games on the road.

At home to start the week on Tuesday, Jan. 17, the varsity girls fell by a 39-20 final to visiting East Union. On the road Jan. 19, the varsity squad trailed host Manteca 20-9 at half and outscored the host team over the final two quarters but not by enough as Manteca won the game, 38-22.

For the JV girls, they got a 39-30 win on the home court against East Union, using a strong second half to pull away. They then took a loss at Manteca, 24-12.

Having a tough go in the Valley Oak League this season, the varsity basketball boys fell on the home court Friday, Jan. 20, losing to Manteca by a 68-48 final.

They also lost by a 67-31 decision on the road at East Union on Wednesday, Jan. 18. There were some strong performances for the Mustangs in the road game; Niko Klose had 12 points and nine rebounds along with three steals. Sophomore Jacob Cavanaugh had seven points, sophomore Jacob Kindrick had six, with senior Cooper Pitney and freshman Gavin Wyatt each adding three to round out the Oakdale scoring.

In junior varsity action, it was a home loss, 49-35, to Manteca on Friday night and a road loss at East Union on Jan. 18.

The freshmen suffered a similar fate, taking VOL losses to Manteca in a home game on Friday, Jan. 20 and at East Union on Jan. 18. The final at home was a 44-13 decision while the frosh boys came up just short against the Lancers, falling 40-38.