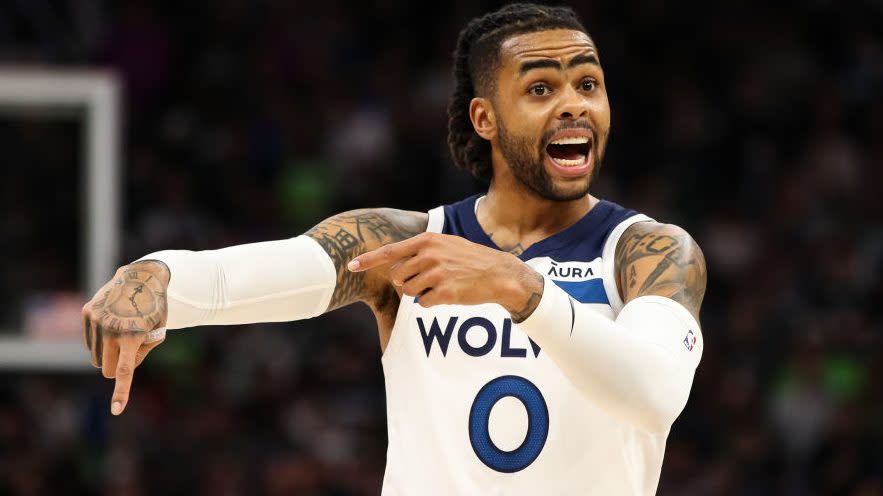 With his team’s season on the line – the closing minutes of the Game 6 elimination game against the Memphis Grizzlies – Timberwolves coach Chris Finch benched D’Angelo Russell to play undrafted third-year guard Jordan McLaughlin. Russell was not happy about it, but it was the right move after his play in the clutch of previous games in the series. McLaughlin gave the Timberwolves a better chance to win.

After returning to the playoffs and respectability in a 46-win season, the Timberwolves have to step back and assess what next steps are needed. What players should they put around Karl-Anthony Towns and Anthony Edwards to continue to move forward in a West that will only get deeper and tougher next season? That may mean the end of the KAT / Edwards / Russell “big 3” in Minnesota – the Timberwolves are expected to shop Russell for a trade this offseason, according to Marc Stein in his Monday newsletter on Substack:

Numerous rival teams expect the Wolves to try to trade Russell this offseason irrespective of Russell’s close relationship with Minnesota star Karl-Anthony Towns. Russell, 26, has one season left on his contract at $ 31.4 million.

Russell is in the final season of his max contract and is now extension eligible, but he is no longer considered an All-Star or max player and will not get an offer near his previous numbers (or what he likely expects). It’s Russell’s expiring contract that makes a trade possible, Timberwolves fans should just not expect a lot in return.

Russell was the initiator of the Timberwolves’ offense most of the season and when he hit shots – like against the Clippers in the play-in game – it made their offense dynamic. He just did not do it consistently and his poor defense was a key part of the three blown leads against the Grizzlies in the playoffs. Russell averaged 18.1 points a game but shot 41.1% overall this season, taking 53% of his shots from 3 and hitting a respectable but not dynamic 34% of those. Against the Grizzlies, Russell averaged 12 points per game and shot 29% on 2-pointers. Russell was solid this season – and Finch praised him during exit interviews – but McDaniels looks more like the point guard of the future.

The Timberwolves need the ball in Edwards’ hands more in the future, Russell may not be the best fit for that.

While there are teams looking for a point guard this offseason, there will not be a robust market for Russell at his current salary. If the Timberwolves can find a deal, it will be more about Russell’s expiring contract.

Expect a lot of Russell rumors this offseason, but finding a trade will not be that easy. If they do find one, it will say a lot about the future direction of the Timberwolves.

Check out more on the Timberwolves