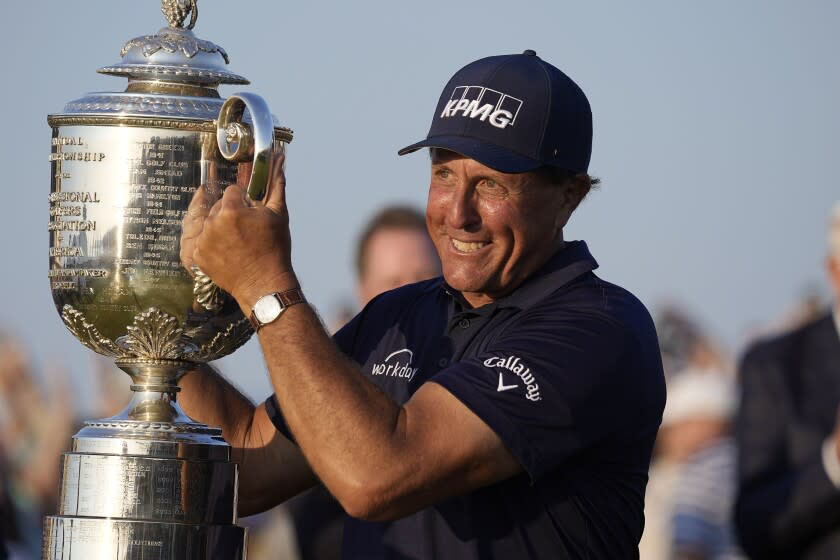 Phil Mickelson stunned the sports world last May by winning the PGA Championship at age 50, becoming the oldest player to win a major championship.

Since then, he has been steeped in controversy because of derisive comments he made to Golf Digest and the Fire Pit Collective about the PGA Tour and the Saudi Arabian regime bankrolling a rival golf league.

Mickelson skipped the Masters in April, and, although he’s officially registered to play in the PGA Championship on May 19-22 at Southern Hills in Tulsa, Okla., There’s no guarantee he’ll be there.

Q: Do you think Phil will show up and play at Southern Hills?

Hairy: I hope he plays. But how does he go to a tournament and avoid the crush? Maybe he’ll do some sort of a sit-down interview with somebody, then not take any media questions. I did not think there was any way he would skip the Masters. Now I think anything’s possible. Missing the PGA which would really be a shame given how big of a deal that was a year ago.

I find it sad in the sense that, forget about how we got to this point. That’s another story. We can debate whether he deserves this or not. But the guy won the PGA last year, became the oldest major champion. The record had stood for 53 years. He won on a US Open-style course, against a guy in Brooks Koepka who’s won four majors. And he should be reveling in that right now. He should be able to live with that forever, no matter what he did.

Q: Did you ever imagine a defending champion might miss a major that he’d just won?

Hairy: It’s rare, but it happened before. One instance that comes to mind is when Tiger [Woods] won the PGA at Southern Hills in 2007 and then did not play in ’08 because he was out with knee surgery. The PGA was in August then. We knew for months that Tiger was not going to play because immediately after the US Open he had surgery and they told us he’d be out for the year.

Q: You’ve covered golf for a long time. What’s something about the book that might surprise people?

Phil was Tiger before Tiger. If you’re a certain age, you might not realize how great Phil was as a young player. He was every bit as heralded as Tiger as a young kid. Tiger ended up getting more attention because he won all those US Amateurs and he was a phenomenon. His dad was kind of a bombastic figure, and Phil’s dad was in the background. But if you took their amateur records and put them in front of somebody, and that person did not know who they were or what they did as pros, you might say that Phil would have the better pro career.