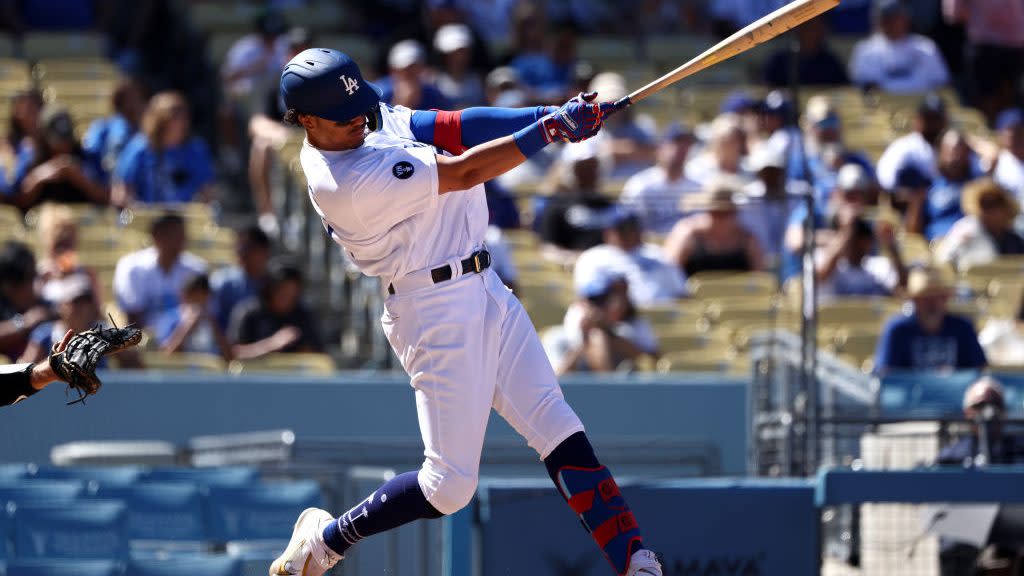 LOS ANGELES – Rookie Miguel Vargas drove in the go-ahead run with an infield single in a five-run eighth inning and the Los Angeles Dodgers rallied past the Arizona Diamondbacks 6-5 Tuesday for their MLB-leading 44th comeback win in the first game of a doubleheader.

“We did everything we could to give them the game and they gave us extra outs,” Dodgers manager Dave Roberts said.

The Dodgers, with the best record in the majors at 103-44, won their fifth in a row. Los Angeles shortstop Trea Turner exited in the fifth after being hit in the side by a ball that ricocheted off a runner’s helmet. Removed for precautionary reasons, Turner was expected to start the nightcap.

After stranding 12 runners though seven innings, managing just one run on seven hits, the Dodgers batted around in the eighth and rallied from a 5-1 deficit.

“There’s a lot of life in this club,” said Justin Turner, who had three hits. “It wasn’t all sexy three-run home runs. It was grinding at-bats.”

Austin Barnes chased Caleb Smith with a two-run homer that drew the Dodgers to 5-3. Pinch-hitter Will Smith singled with the bases loaded to make it 5-4.

“He takes good at-bats all the time and hadn’t really gotten great results all season long, but I think down the stretch if you look at the last two months the quality ABs he’s put together, some big swings, big knocks and basically does a helluva job behind the plate with our pitching staff,” Turner said. “Great job by Barnsie getting us through that.”

Los Angeles tied the game on Trayce Thompson’s infield single to third before the 22-year-old Vargas, playing his ninth game in the big leagues, came through against Joe Mantiply with his second hit of the inning. He got the rally started with a leadoff single.

“When you go from playing every day in the minor leagues to coming up and kind of getting put in a role position, that’s something you have to learn how to do, too,” Turner said of Vargas. “He’s been great, he’s been positive.”

Vargas made a nifty catch on Ketel Marte in the fifth, going to his left, then reversing to his right while battling the sun before turning around and snagging the ball.

“He’s getting his feet wet. He’s learning on the fly,” Roberts said of Vargas.

Ryan Pepiot (3-0) got the win with three innings of relief. Chris Martin pitched the ninth to earn his second save.

Christian Walker hit his 35th home run and Daulton Varsho also connected for Arizona, which lost for the 20th time in 21 games at Dodger Stadium.

Arizona starter Zach Davies allowed one run and five hits in three innings. He struck out three and walked two.

The D-backs took a 2-1 lead on Varsho’s homer leading off the third. They tied it 1-all on a two-out, ground-rule double by Cooper Hummel in the second.

Arizona extended its lead to 3-1 on Varsho’s RBI single in the fourth.

The D-backs made it 5-1 in the fifth. Walker homered Dodgers starter Michael Grove, and Alek Thomas singled and Josh Rojas scored on Vargas’ throwing error from left field.

Vargas’ throw to third struck Thomas’ helmet as he was going into the base and the ball ricocheted and hit Turner in the side. Turner left the game soon after.

Grove gave up five runs and nine hits in five innings. The right-hander struck out seven and walked one.