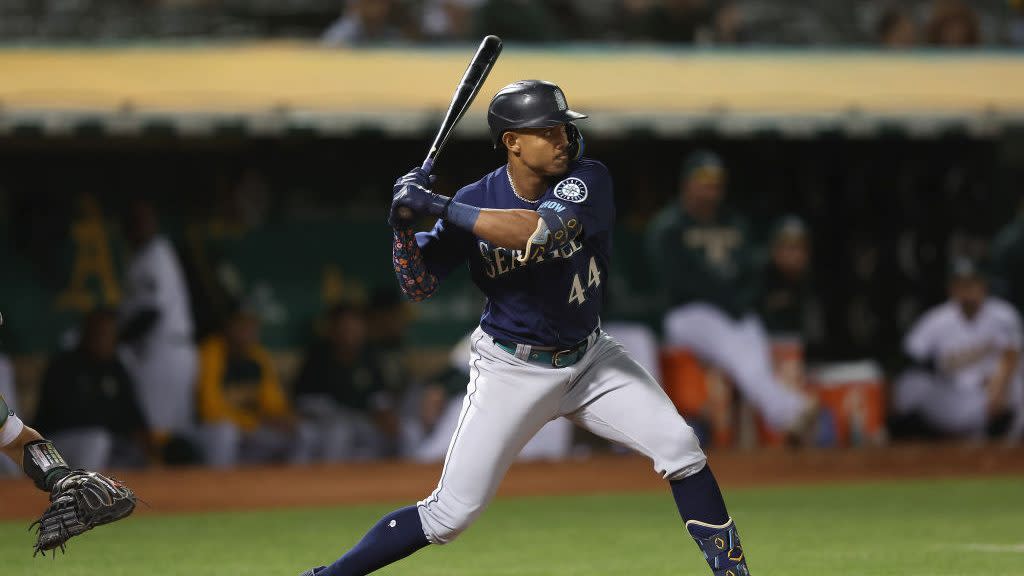 OAKLAND, Calif. – Julio Rodriguez doubled and scored before leaving with lower back tightness, and the Seattle Mariners overcame the loss of the rookie center fielder to beat the Oakland Athletics 9-5 on Thursday and avoid a three-game sweep.

Rodriguez slowly walked off the field with a trainer in the bottom half of the first inning. He recently missed three games in Anaheim with a lower back issue.

“Concerning,” Mariners manager Scott Servais said. “It’s the same area in the low back. He’ll get work up tomorrow when we get to Kansas City, get an MRI and pictures of that.”

Jarred Kelenic moved from left to center field and Sam Haggerty entered the game in left. Kelenic homered and doubled in his first game since being called up from Triple-A Tacoma.

“They both felt pretty good,” he said. “I’m just happy that we came out with a `W’ today.”

Adam Frazier went 2 for 4 with three RBIs. Mitch Haniger, Cal Raleigh, Jesse Winker and Ty France also drove in runs for Seattle, which entered the day with a four-game lead over Baltimore for the third and final AL wild-card position.

“When Julio went down, we just kind of picked each other up and grinded through it, came out on top,” Kelenic said. “That was the biggest thing.”

The A’s built a 5-3 lead against Mariners starter George Kirby, tagging the rookie right-hander for five runs on seven hits in 2 1/3 innings. Kirby struck out one and walked three.

Kelenic homered off Oakland starter Adrian Martinez in the fourth inning to bring the Mariners within one. Martinez gave up five runs on six hits and two walks in five innings, striking out seven.

Kelenic tied the game in the sixth with an RBI double off reliever Kirby Snead. Frazier added a two-run double to put Seattle ahead.

Snead (1-1) surrendered two runs on two hits and a walk in two-thirds of an inning.

Matthew Boyd (2-0) pitched two scoreless innings to earn his second win as a Mariner. Boyd and five other relievers limited the A’s to just two hits in 6 2/3 innings.

“Our bullpen was nails today,” Servais said. “Matt Boyd was fantastic giving us two shutout innings and the guys after him did their job putting zeros up there, allowing our offense to get back in the game.”

Vogt announced that he will retire at the end of the season, ending a 10-year major league career.

“I feel so fortunate that I’ve earned the opportunity to walk away on my terms,” ​​he said. “I’m very proud of what I’ve accomplished.”

Vogt hopes to remain in baseball following his playing career.

Mariners: SS JP Crawford was held out of the lineup with a minor leg issue. “He had kind of a funny slide four or five days ago at second base,” Servais said. “Got hit by a pitch on the same leg. Didn’t look like he was moving great last night. Had a chance to talk to him after the game and thought it best to give him a day-to-day.”

Athletics: LHP Cole Irvin (9-11, 3.79) tries to win his fourth straight decision Friday as Oakland welcomes the New York Mets for a three-game series. It will be Irvin’s first career start against the Mets.