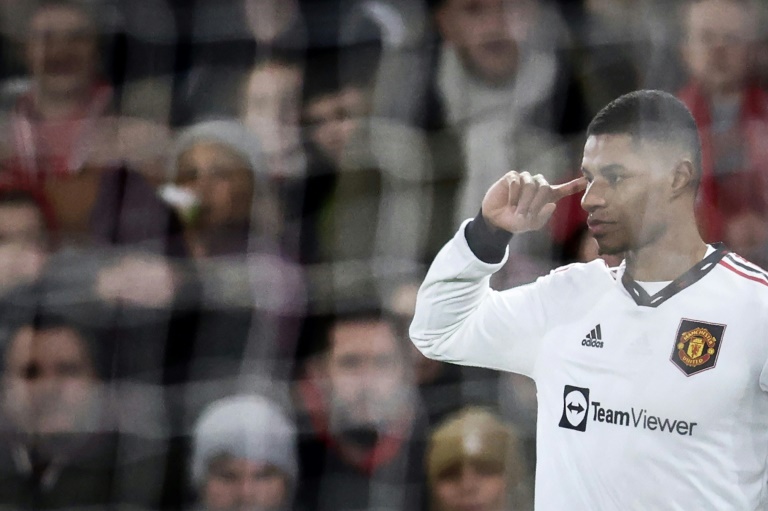 Marcus Rashford scored a dazzling solo goal as Manchester United beat Nottingham Forest 3-0 in the first leg of their League Cup semi-final on Wednesday to virtually book a place at Wembley next month.

The England man, enjoying a purple patch following the World Cup, netted his 18th goal of the season in the sixth minute to silence an expectant crowd at the City Ground.

New United loan signing Wout Weghorst scored his first goal for the club just before half-time, to put the visitors in total control, and Bruno Fernandes added gloss to the scoreline late on.

Erik ten Hag’s men are hot favorites to reach Wembley as they seek to end their six-year trophy drought, with either Newcastle or Southampton lying in wait.

“I’m happy with the performance and I think over 90 minutes we controlled it,” Ten Hag told Sky Sports.

But he highlighted a disallowed Forest goal in the first half, warning his side could not afford to let opponents back into the match when they were in charge.

The Dutchman was careful to avoid any hint of complacency ahead of the second leg at Old Trafford on February 1.

“We have to play one game and we have to do the same. We have to prepare, we have to make a good game plan and the players have to be focused,” he said.

Former Ajax boss Ten Hag has revitalized United in his first season in charge but will be desperate to win silverware to appease the hungry fans.

Brazil midfielder Casemiro was back in the United starting line-up after being suspended for Sunday’s 3-2 Premier League defeat at leaders Arsenal, which left United fourth in the table.

Forest, with new boy Danilo in the starting line-up, came into the match full of confidence after just one defeat in their past seven Premier League matches had lifted them to 13th in the table.

But the visitors took control immediately and opened the scoring in style.

Rashford picked up the ball in his own half and raced down the left, cutting into the box between Joe Worrall and Remo Freuler before beating Wayne Hennessey at his near post with a powerful left-footed shot.

It was his 10th goal in 10 games since returning from Qatar last month.

Forest, who have won the League Cup four times in their history, thought they had equalized midway through the first half when Sam Surridge produced a fine finish after a rampaging run through the middle by Morgan Gibbs-White.

But the goal was ruled out by VAR for a tight offside against Surridge.

Gustavo Scarpa stung David de Gea’s hands with an audacious volley as Forest increasingly came into the game, with Gibbs-White and Brennan Johnson a threat.

But five-time winners United doubled their lead just before half-time, with Dutch forward Weghorst reacting smartly to fire home with the outside of his right foot after Hennessey had denied Antony.

United were largely untroubled in the second half, coming agonizingly close to extending their lead when Christian Eriksen rattled the crossbar from the edge of the box in the 54th minute.

The visitors continued to threaten and rounded off a comfortable night when Fernandes slotted home after a clever dinked pass from substitute Anthony Elanga.

Newcastle, chasing their first domestic trophy since 1955, beat Southampton 1-0 on Tuesday in their first-leg match..