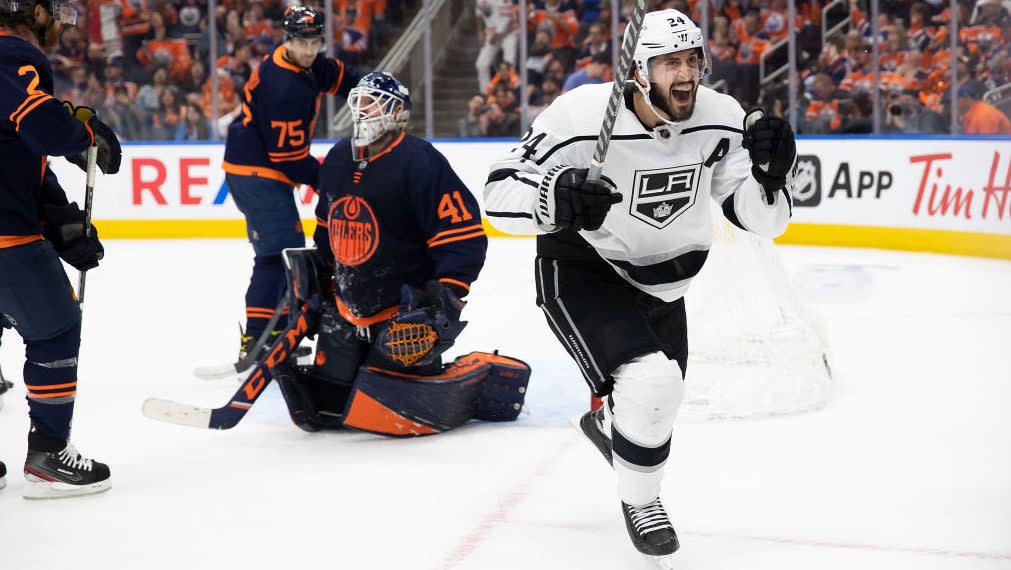 • Despite a potentially devastating major penalty by Kyle Clifford, the Maple Leafs thumped the Lightning in Game 1.

• The two West road teams won their Game 1 matchups in different ways (Kings over Oilers by a goal; Blues shut out the Wild 4-0), but both got the job done.

• Juuse Saros won’t be available for the Predators for at least the first two games of their First Round series vs. the Avalanche.

After late-season injuries, it was not clear if the Hurricanes would roll out a reliable, healthy goalie against the Bruins. Frederik Andersen missed Game 1, but Antti Raanta won his first career playoff game by making 35 saves against the Bruins. The 5-1 score is a bit misleading, as a Taylor Hall goal reduced Carolina’s lead to 2-1 about three minutes into the third period.

The Hurricanes responded with two goals, then an empty-netter, to remove any doubt.

Now, this Game 1 was as lopsided as the score indicates, as the Maple Leafs leveled the Lightning to a shocking degree. As mentioned in the bullet points, a Kyle Clifford major penalty could’ve been trouble for Toronto. Instead, they generated more scoring chances than the Bolts’ power play, and the Buds rarely looked back.

Heading into this First Round series, there was some question if the Blues would start Ville Husso or Jordan Binnington Vs. the Wild. On one hand, Husso put up elite goaltending during the regular season, while Binnington was up-and-down (at best). On the other hand, Binnington’s their bigger-money goalie, and has a Stanley Cup on his resume.

Wisely, the Blues stuck with the hot hand, and Husso delivered a shutout in his first NHL playoff start.

Husso was not the only driving force of this Blues win, but he could be a big difference-maker against a Wild team that generated a greater volume of shots than St. Louis in Game 1.

On a side note, this could be a situation to watch.

When you watch this Connor McDavid goal, and realize it did not summarize the entire impact of McDavid and Leon Draisaitl, you might assume the Kings were in trouble on Monday. Really, you just need to watch that McDavid goal anyway.

Instead of wilting in what was a frenetic Game 1, the Kings never trailed against the Oilers. The Kings routinely took advantage of a rough night for Mike Smith, culminating in the game-winning goal with 5:14 remaining in the third period.

It seems like we can only go so long before it’s time to question the Oilers’ goaltending again. Could Mikko Koskinen be the guy in Game 2?

Three Stars in NHL for Monday (first day of playoffs)

When will we get to the point where David Perron is no longer underrated? Honestly, it would help if he stopped raising his ceiling.

Perron was a huge factor in the Blues beating the Wild on the road in Game 1, notching a hat trick plus an assist. Since rejoining the Blues (again), he has been a productive playoff performer. Perron generated 16 points in 26 games during their Stanley Cup run in 2018-19. He has been even more prolific lately, generating nine points in as many playoff games in 2019-20, and then those four points in Game 1.

To some, Ville Husso’s 37-save shutout is even more impressive than Perron’s four-point game. Either way, the Wild simply need to hope that one (or both) of them cool off quite a bit.

Let’s cheat and mush these two together. After a miserable series against the Canadiens last postseason, Auston Matthews and Mitch Marner wasted no time making an impact for the Maple Leafs in Game 1 vs. the Lightning.

Carry over that Marner – Matthews spirit and consider this a combined award for the line of Trevor Moore (credited with a goal and two assists), Phillip Danault (1G, 1A, may have scored the game-winner), and Alex Iafallo (1G , 1A).

During the regular season, Danault proved that he’s more than just a strong defensive forward. That carried over for the Kings in getting the edge over the Oilers in Game 1.

At 5-on-5, that trio was on the ice for three goals for and zero against. That wasn’t just luck, either. Via Natural Stat Trick, Iafallo – Danault – Moore were on the ice for five high-danger chances for, with just one against.

Jay Woodcroft did not have Connor McDavid out there all that often against Danault (3:21 TOI), as McDavid primarily faced Anze Kopitar (7:58). As this series goes along, it will be interesting to see which matchups each coach tries to chase. Frankly, Game 1 did not provide a lot of easier answers for the Oilers against the Kings.

James O’Brien is a writer for Pro Hockey Talk on NBC Sports. Drop him a line at phtblog@nbcsports.com or follow him on Twitter @cyclelikesedins.