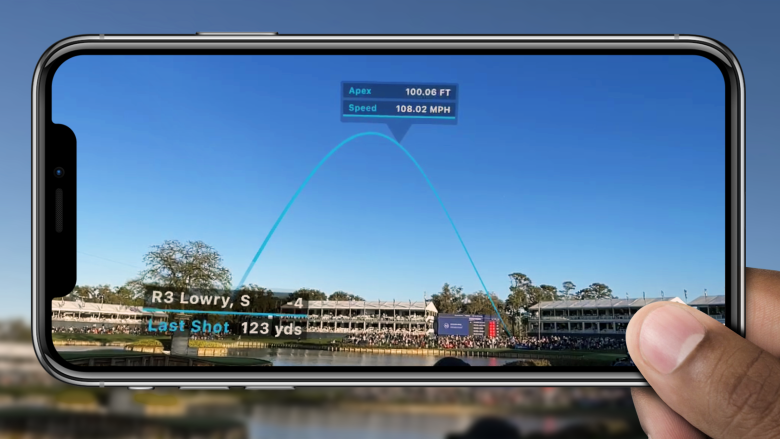 The PGA Tour is taking equity in augmented reality startup Quintar as part of its ongoing effort to turn putting greens into green screens in order to make watching golf more immersive.

The Tour has been working with Quintar to develop its PGA TOUR AR app since 2020. At 10 courses this year, attendees can hold up their phones (in landscape mode!) To see data not available to the naked eye, like ball locations and shot trails of previous drives.

“Golf is a tricky sport to watch when you’re there in person,” PGA Tour VP, media business development Chris Wandell said in an interview. “In some ways it’s the best because you can get within four or five feet of a guy when they’re teeing off. In other ways, it’s a little white ball, if there’s 20 people in front of you, you can not really see much, so to have different technologies to help enhance the fan experience is something we’re continually looking at. ”

For the future, the Tour is also looking at how the tech could improve the on-couch experience as well, even potentially allowing viewers to create a 3D visualization of a course on their coffee table. The most recent agreement spans three years.

The augmented reality field has gained a renewed sense of momentum after virtual reality hype slowed a couple of years ago. In contrast to an entirely online metaverse, AR tech promises to enhance real-world experiences.

“It still encourages people to go to games,” Quintar president Jeff Jonas said. “Now you go to games and you get a lot of information you normally only get at home.”

DraftKings, the presenting sponsor of the Tour’s AR offering, is also looking into how the tech could bring betting opportunities closer to game action. “They’re interested in this space,” Wandell said. “You could envision this living in other places, like the DraftKings Sportsbook app.”

Quintar has raised seed funding and now has more than a dozen employees with backgrounds spanning from Turner Sports to Magic Leap. “We’re starting with golf,” Jonas said. “There’s a couple of sports we’re about to announce. And then we’re actually looking into how this goes beyond sports. ”

As it seeks to keep the game of golf on the tech frontier, the PGA Tour is also stepping into the world of NFTs. The organization has reportedly come to agreements with Autograph (which lists Tiger Woods as an equity holder) and Sorare for two NFT projects that could be unveiled as soon as this season.