Patrick Beverley’s comments on his shove of Deandre Ayton 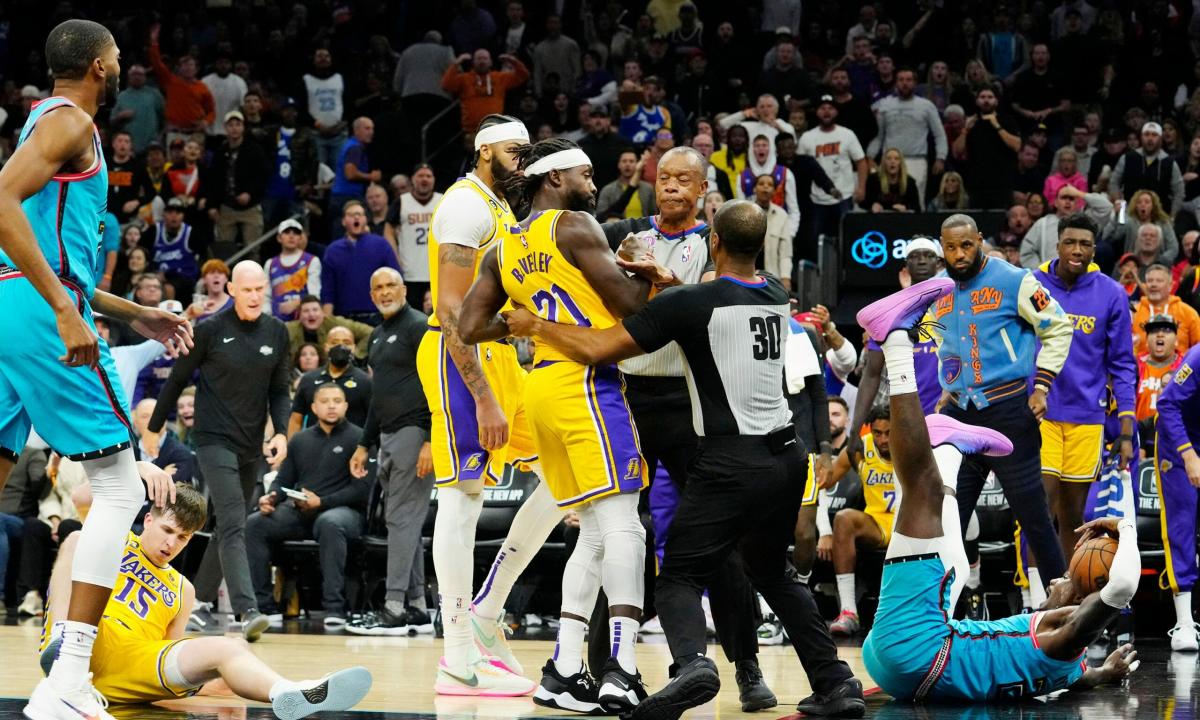 Not only did the Los Angeles Lakers lose to the Phoenix Suns, 115-105, on Tuesday evening, but they also got themselves into an incident that was avoidable.

With 3:55 left in the fourth quarter, Devin Booker was called for a flagrant foul when he raked Austin Reaves in the face after blocking his shot. Suns center Deandre Ayton stood over Reaves, who was on the floor on his back, and appeared to taunt him.

That’s when Patrick Beverley rushed over and violently shoved Ayton, causing him to trip over Reaves and fall to the ground.

Beverley was ejected from the game, and per NBA rules, he may face a suspension as well.

After the game, the Lakers guard said he shoved Ayton as retaliation for taunting Reaves.

“Got a person on the ground, two people looking over mean-mugging and puffing their chest out and referees don’t get into it to kind of separate it, control the game, so I’m going to stand up for my teammate, Beverly said.

“I’m not going for that [expletive],” Beverley continued. “Obviously, it’s unfortunate that it happened on national TV. But you know me: Regardless of what’s going on, I’m a big fan of protecting my teammates. … I’m a foxhole guy. I put on the jersey, and I commit to a team, I commit to a city, and it’s kind of my motto. I’m a foxhole guy.

The Lakers trailed by 10 at the time, and because both Beverley and Ayton were called for technical fouls, Phoenix shot no free throws as a result of the dust-up. In fact, it was Reaves who got two foul shots on the flagrant foul, and he made both.

Afterwards, LA retained possession, and it got a basket from Anthony Davis to come within six. But it wouldn’t get any closer than that.

Other Lakers made it clear they supported Beverly’s action

Perhaps what Beverley did was unsportsmanlike, but from another perspective, it was admirable since he was defending a teammate and sending a message that an opponent wouldn’t get away with taunting.

Reaves made it clear that he appreciated Beverly’s effort.

“‘I really didn’t see much after I got hit in the nose,’ Reaves said. I thought I was bleeding, so I was on the ground. And when I did turnaround, I saw Pat has my back, which I love. Everybody on the team…is the same way. If it was him, we would have done the same thing for him.’

“Reaves said he had already told Beverley that he appreciated him ‘four or five times’ from the end of the game to the time that Reaves spoke to reporters.

“‘He’s a team player,’ Reaves said. ‘He rocks with who he rocks with. Whoever is on his team, you respect him. You love him. You’re glad he’s on your team. When he’s not, he’s a pest, does all that stuff, all those little things. But I just respect him for who he is and standing up for me.’”

Even Lakers head coach Darvin Ham showed some sort of support for Beverley.

“Pat Bev, you don’t want just to be a tough man competition; you actually want to play tough basketball. But at the end of the day, I’m not mad at him,” Ham said. “He’s there protecting his teammate, and I’m sure he’ll probably go through some type of consequence for that.

“But at the end of the day, that’s what we have to be as Lakers: We got to be together.”

Los Angeles will have two days off before visiting the San Antonio Spurs on both Friday and Saturday.