NHL99: Joe Sakic remains a ‘king’ in Denver, Quebec City and all over the NHL map

Welcome to NHL99, The Athletic‘s countdown of the best 100 players in modern NHL history. We’re ranking 100 players but calling it 99 because we all know who’s No. 1 — it’s the 99 spots behind No. 99 we have to figure out. Every Monday through Saturday until February we’ll unveil new members of the list.

The disdain between the Avalanche and Red Wings wasn’t the first rivalry in which Joe Sakic found himself. He started his NHL career in Quebec City with the Nordiques, the less-successful team in the heated Battle of Quebec. Over an 11-year span, the Nordiques and Montreal Canadiens played each other five times in the playoffs, including once in Sakic’s playing career. A few years before Sakic entered the NHL, a postseason game between the two ended with 11 ejections. There was vitriol between the two clubs. Hatred.

And yet, when Sakic — the final captain of the Nordiques before their move to Colorado — was introduced at the 2022 NHL Draft in Montreal, he heard nothing but cheers. As he walked to the stage to accept the Jim Gregory Memorial General Manager of the Year Award, fans in red Canadiens jerseys got to their feet to applaud. The noise in the Bell Center swelled as he began to speak.

That’s the reception you get as one of the most loved figures in the sport.

“Merci beaucoup,” he said, dusting off some of the French he learned while with the Nordiques.

Sakic is not only one of the best hockey players of all time, slotting in at No. 13 in The Athletic’s list of greatest modern-day NHLers. He’s also one of the most universally respected. Fans in Quebec City adore him nearly three decades after the Nordiques left town. Canadiens supporters still cheer for him. He even had respect from the Red Wings. Mike Ricci, who played with Sakic in both Quebec City and Denver, remembers that Sakic and Detroit captain Steve Yzerman were “pretty much left alone” during the rivalry. Even opponents held them in high esteem.

“You respect the other team’s king,” says Darren McCarty, who was with Detroit at the height of the rivalry. “We all loved Joe Sakic. We all thought he was amazing.”

“The rest of us, they love to hate,” Ricci adds.

And of course, there are the people in Denver, where Sakic has a sterling reputation. He won the Conn Smythe Trophy for playoff MVP in 1996, the team’s first year in Colorado. He captained the team to a pair of Stanley Cup wins, won a Hart Trophy, a Lady Byng Trophy and finished his career with 1,641 points. His success — paired with that of his team — helped the fan base take off. Then, 13 years after his playing career ended, he led the Avalanche to another Stanley Cup as the team’s general manager.

He’s the face of the sport in Colorado, and he has been since the team arrived. He ushered in a new era of professional sports.

“Obviously, John Elway was the guy in Denver at the time and will always be the guy in Denver. I know that,” says broadcaster John Kelly, who called the team’s move after Avalanche games. “But Joe Sakic, from Day 1, has certainly (been) the hockey guy in Denver.”

At first, Ricci wrote off the rumors. He didn’t think the Nordiques would actually move. But as the 1994-95 season progressed, the talks started to feel more serious. The team was having trouble financially, though not due to lack of fan support.

“Marcel Aubut, the owner, had dinners with us,” Ricci says. “You could tell, the way he was talking, it was dire.”

The chatter proved true. Aubut sold the team to the COMSAT Entertainment Group, which also owned the Denver Nuggets. COMSAT moved the team to Denver.

“It was kind of an unsettling time but exciting time,” says Curtis Leschyshyn.

They were leaving a city with a stable, large fan base and heading to a place most players didn’t know much about. How would they fit into a market with three other major professional sports teams, where the NFL’s Denver Broncos were the kings? There was a passionate fan base there, but the players didn’t know that at the time.

By the time of the move, Sakic was the face of the Nordiques. For one, his performance was exceptional, even when the team was struggling. He had three 100-plus point seasons in Quebec City, two of which came when the Nordiques won 12 and 16 games. Fans in Quebec are knowledgeable about hockey and know how to recognize talent, Leschyshyn notes. Sakic clearly had it.

And then there was the way he carried himself.

“A captain all the way,” says Quebec City resident Christian Robitaille, who grew up rooting for the Nordiques.

“He was always respectful to the Nordiques fans,” Ricci adds. “He loved being there. He loved the fans there. There was never an inkling of him wanting out, even when they were bad. He stuck through with that, stuck through the bad and turned it into what it is today.”

Towards the end of the team’s days in Quebec City, the roster began to come together. Sakic was a star, and trading Eric Lindros brought the Nordiques a bevy of pieces, including Peter Forsberg, who won the Calder Trophy in 1994-95. The Nordiques had persevered through their awful seasons and made the 1995 playoffs, only to lose in the first round to the New York Rangers.

“That’s what we did in Quebec: We learned how to lose and eventually learned what it takes to win,” Leschyshyn says.

Unfortunately for the Nordiques fans, they never got to see those lessons come to fruition. Sakic and the Nordiques were off to Denver, ready to take the next step as a Stanley Cup contender.

Want to know how to win over a new fan base? Start by winning games.

The Avalanche did just that in their first season. This wasn’t an expansion team without top-end talent. This was a club with star power, a proven captain in Sakic and, thanks to a midseason blockbuster, a Hall of Fame goalie in Patrick Roy. They were, as longtime employee Jean Martineau says, ready to explode.

The Avalanche were young and dynamic — which Martineau, who handled the team’s communications in both Quebec City and Colorado, felt matched Denver’s energy in the mid-1990s. And although the Avalanche were new, the city already had hockey fans. The University of Denver is a traditional NCAA power, and the city had an NHL team from 1976 until 1982, when the Colorado Rockies moved to New Jersey and became the Devils.

The existing fans saw quite a show in the inaugural season. Thanks in large part to Sakic’s quick, forceful shot and career-high 120-point season, the Avalanche ended the regular season with the league’s second-best record. That led to the stage where Sakic became a household name around town: the playoffs.

“Outside of the true hockey fans, the market really started to embrace the team during the Stanley Cup run,” says Martineau, now a travel and communications advisor.


Joe Sakic accepts the Stanley Cup from Gary Bettman in 1996. (B Bennett/Getty Images)

The run could’ve been a lot shorter if the second round had gone a little differently. In the second round, Colorado trailed 2-1 in the series and locked in a triple-overtime Game 4. Early in the third overtime, Ricci found himself on the ice with Sakic. He says he often played with more skilled players as games got longer. The fast players slowed down, but he joked that he could stay the same, not-too-fast speed for 20 periods if needed. And when he was on the ice in those moments, all he wanted to do was get Sakic the puck.

Ricci got the puck in the offensive zone, then moved it along the boards to Alexei Gusarov. Sakic, meanwhile, cut towards the net, where Gusarov hit him with a tape-to-tape pass. The captain redirected the feed into the net and threw his arms over his head in excitement.

“That was the biggest goal in the playoffs as far as I’m concerned,” says Kelly, who adds it was perhaps the most memorable game he’s broadcast because of all the pressure on Colorado.

Colorado won the next two games, including a double-overtime Game 6. Sakic didn’t get the game winner that night, but he picked up a secondary assist on Sandis Ozolinsh’s overtime tally. The Chicago series, in which four games went to overtime, was when Martineau saw the buzz around Denver extend beyond the hardcore fans.

“You come in and you win like that, and the first year the people were drawn to it,” former defenseman Adam Foote says.

Sakic’s heroics continued. In the conference finals against Detroit, he scored two goals in the decisive Game 6, including the go-ahead tally in the second period. Then he led Colorado to a sweep of the Panthers in the Stanley Cup Final. After Game 4, NHL Commissioner Gary Bettman called him forward to accept the Conn Smythe Trophy for playoff MVP. He averaged nearly a goal a game in those playoffs (18 in 22) and set a since-broken record of six game-winning goals.

“He knew how good he was,” Ricci says. “He just didn’t feel the need to tell anybody or talk about it.”

He didn’t need to earn acclaim with the Avalanche. In large part because of his heroics, Denver had its first professional championship in any sport. He lifted the Stanley Cup over his head, mouth open in a wide grin.

Sakic’s brilliance continued. He led the Avalanche to another Stanley Cup in 2001 and never left the Nordiques/Avalanche franchise. The team retired his number, and he went into the Hockey Hall of Fame in 2012.

“He’s been blessed by a lot of natural talent,” Leschyshyn says. “But he’s also worked hard at his craft and become very successful. Not by chance or dumb luck. He’s earned every accolade he’s ever achieved.”

During Sakic’s peak, kids emulated his game across Colorado. Anaheim Ducks standout Troy Terry, who grew up in Denver, wears No. 19 because of the Avalanche great. He also remained a fan favorite in Quebec, even after the Nordiques moved. Now-NHLers Patrice Bergeron and Jonathan Marchessault, who were originally Nordiques fans, kept up with their favorite players — including Sakic — after the team moved.

During the Denver portion of his career, Sakic kept the reputation he built in Quebec City. He wasn’t brash or arrogant; he was simply a world-class athlete with his head in the right place.

“I always say that if people didn’t know anything about hockey and went up to talk to him, you’d never know he was a Hall of Famer with three Stanley Cup rings and (an) Olympic medal,” Leschyshyn says. “He didn’t come across that way.”

But he had those accolades, too. He’s still the face of hockey in Colorado, and that’s not changing anytime soon.

“He’s in the rafters, man,” Foote says. “It all speaks for itself.” 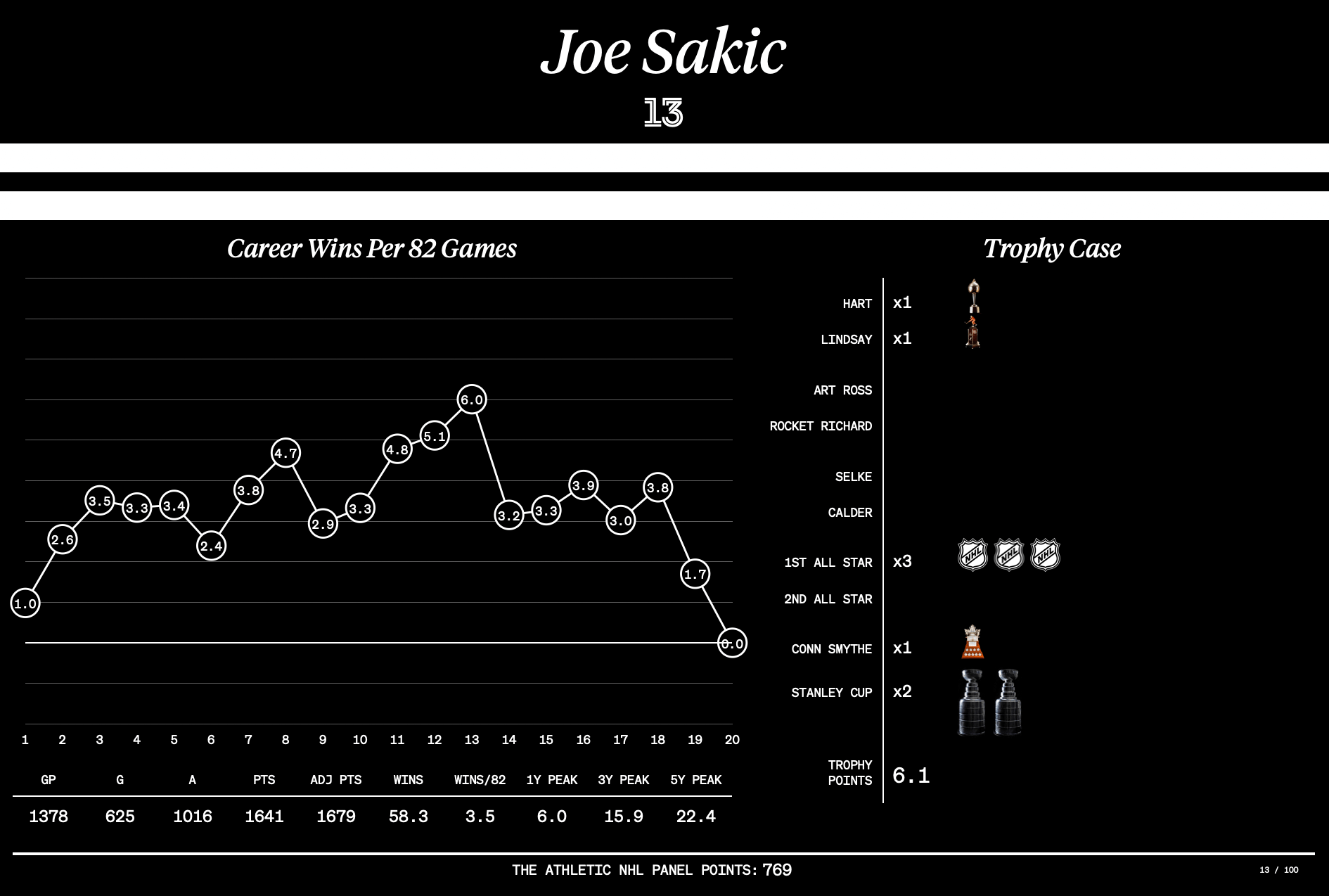