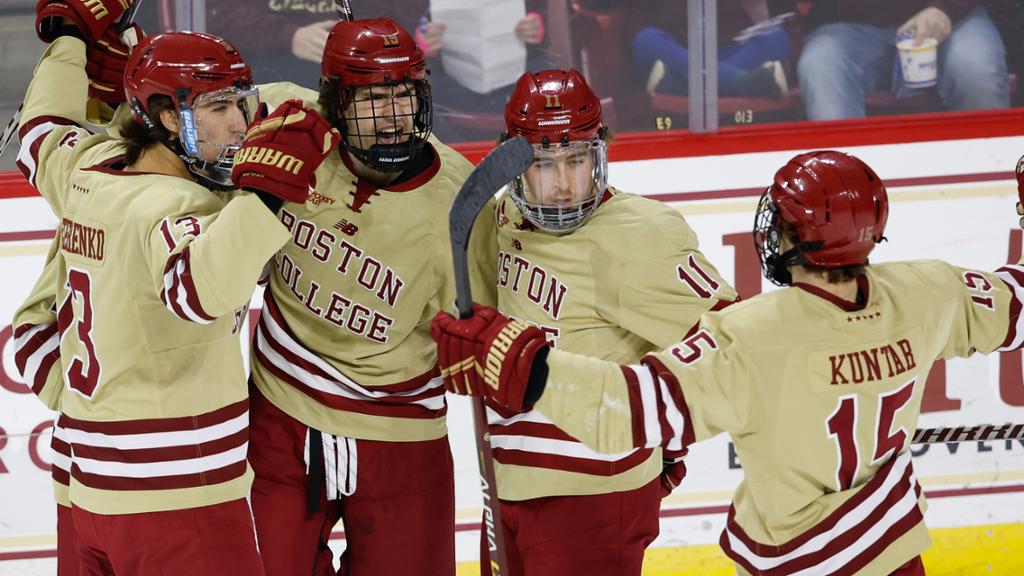 The Beanpot, the annual battle for college hockey bragging rights in Boston since 1952, begins Feb. 6, with the championship game on Feb. 13.

Legendary Boston College coach John “Snooks” Kelley declared decades ago that attending the four-team tournament is “a social and athletic must,” and that remains true in New England hockey circles.

The Beanpot is also a major scouting opportunity for NHL teams to monitor drafted prospects and to watch undrafted players perform in front of big crowds in a pressure-packed environment at TD Garden.

This year there is as much, or more, star power spread across the Boston College, Boston University, Harvard University and Northeastern University rosters as in any season in recent memory.

There are 47 NHL draft picks on the rosters of the four schools, including three first-rounders, eight second-rounders and eight third-rounders, as well as free agents and players eligible for the 2023 NHL Draft.

Harvard leads the way with 15 NHL draft selections, Boston University and Northeastern have 12 each and Boston College has eight.

A quick skater with good hands, he was selected by the Colorado Avalanche in the fourth round (No. 118) of the 2020 NHL Draft.

One of the most dynamic freshmen in college hockey, the 19-year-old is demonstrating why the Philadelphia Flyers made him the No. 5 pick in the 2022 NHL Draft.

With good size (6-foot-2, 189 pounds) and a wicked shot, he leads BC in scoring with 20 points (12 goals, eight assists) in 17 games. He was one of the top forwards for the bronze-medal-winning United States team at the 2023 World Junior Championship with 10 points (four goals, six assists) in seven games.

A junior center, the 21-year-old has a big wrist shot and plays with an edge. Selected by the Boston Bruins in the third round (No. 89) of the 2020 draft, Kuntar is third on BC in scoring this season with 17 points (seven goals, 10 assists) in 19 games.

Kuntar’s father, Les, was a goalie at St. Lawrence who was selected by the Montreal Canadiens in the sixth round (No. 122) of the 1987 NHL Draft and played six games for Montreal in 1993-94.

A skilled forward, he was selected by the Minnesota Wild in the sixth round (No. 172) of the 2019 NHL Draft.

Warren, who played for the USA Hockey National Team Development Program before enrolling in school, was selected by the Wild in the sixth round (No. 166) in the 2019 draft, six picks before they chose Nesterenko.

Work ethic and scoring touch make the sophomore forward one of the most dangerous offensive players in the NCAA. He scored with 19 seconds left in overtime in a 3-2 win at Yale on Jan. 20.

With 29 points (12 goals, 17 assists) in 19 games, the junior forward is the leading scorer for Harvard, a team loaded with top offensive players. He has 57 points (22 goals, 35 assists) in 43 collegiate games.

The 21-year-old led the United States in scoring at the 2022 Beijing Olympics with six points (three goals, three assists) in four games.

He was selected by the Montreal Canadiens in the fourth round (No. 124) of the 2020 draft.

The 21-year-old forward, another weapon in Harvard’s offensive arsenal, is second on the team in scoring this season with 23 points (10 goals, 13 assists) in 19 games. The sophomore has 54 points (24 goals, 30 assists) in 54 games as a collegian.

Lafferiere was selected by the Los Angeles Kings in the third round (No. 83) of the 2020 draft.

The freshman forward is fifth in scoring for Harvard with 16 points (11 goals, five assists) in 19 games, and his plus-14 rating leads the team.

Harvard’s top defenseman plays important minutes in all situations. Aside from being strong in his own end, the senior contributes on offense as well, with 18 points (three goals, 15 assists) in 19 games. He has 71 points (13 goals, 58 assists) in 85 games in his collegiate career.