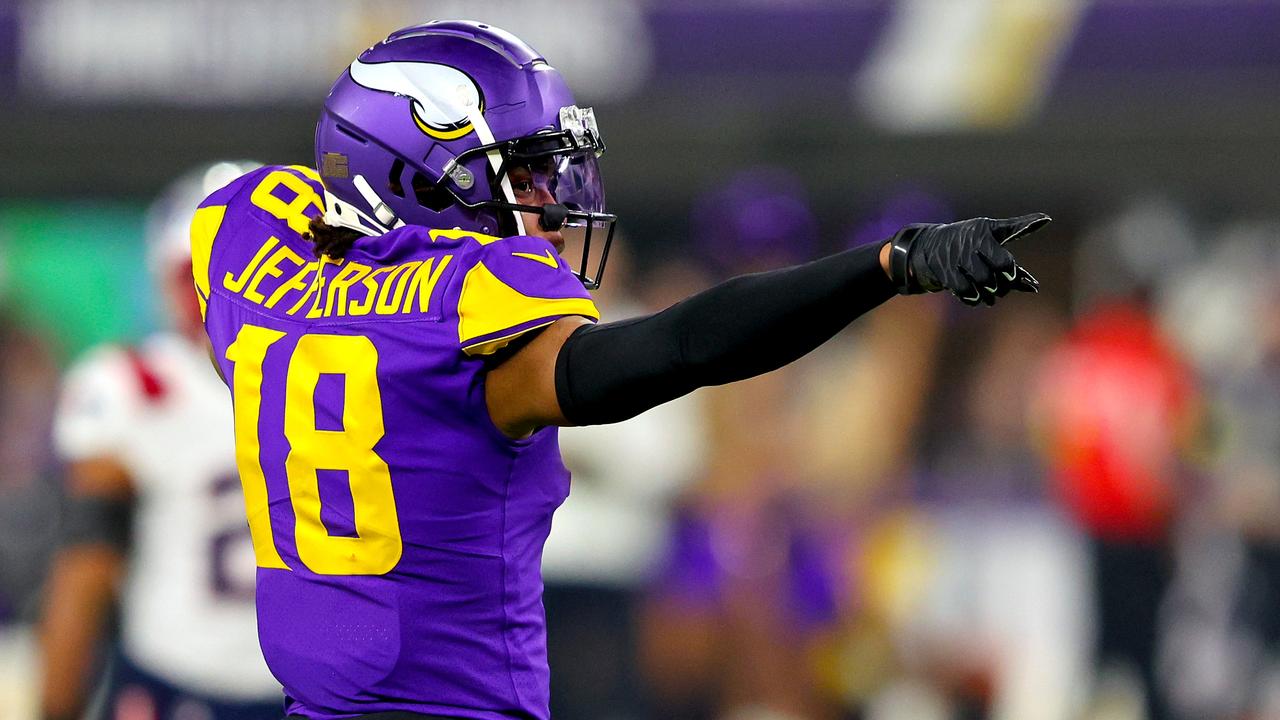 From super special teams play which proved the difference in an enthralling shootout to a Super Bowl favorite sneaking across the line in a thriller thanks to some late game heroics from their star QB, there was plenty to be thankful for throughout Friday’s [AEDT] Thanksgiving Day NFL triple-header.

A star young WR breaks Randy Moss’ record, and an AFC powerhouse breathes a sigh of relief as a former Super Bowl MVP appears to have avoided a potentially serious knee injury which threatened to derail their season. Here is a full wrap of the Turkey Day action.

The first game on the NFL Thanksgiving schedule delivered a dramatic thriller that went down to the wire with Buffalo emerging 28-25 victors over Detroit.

Was it a case of the Bills playing badly? Or are the Lions surprisingly that good?

The truth probably lies somewhere in the middle, but in the spirit of thanksgiving, this game will be analyzed using the glass half-full approach as opposed to half-empty.

While there’s no doubting that Buffalo and star quarterback Josh Allen have been well below their best of late, you also have to acknowledge that the Detroit Lions have been giving their opposition a run for their money all season long (with the exception of back-to -back blowout losses to the Patriots and Cowboys in Weeks 5 & 6).

Disregarding those two uncompetitive losses, the Lions remaining nine games have been decided by an average margin of just 5.1 points, and while that competitiveness hasn’t translated to many wins (4-7 record) just yet, it has made them one of the more entertaining teams to watch in the entire league.

It’s a step in the right direction for Dan Campbell’s squad in 2022 and after struggling to move the chains consistently for much of the game, it took the Buffalo down to the final seconds to land the knockout blow and put them away.

Having gone nearly the entire second half without scoring a touchdown and trailing 22-19 in the fourth quarter, Josh Allen led the Bills on a 14-play, 90-yard drive that ended in a touchdown to Stefon Diggs with 2:40 left on the clock. However, kicker Tyler Bass missed the crucial extra point meaning the Lions only needed a field goal to tie the game.

Detroit, riding a three-game winning streak, looked set to take the game to overtime after kicker Michael Badgley made a field goal from 51-yards to level the scores at 25 a piece.

With 23 seconds left to march all the way down the field and set up a potential field-goal shot, Allen overcame his troublesome shoulder injury to rifle a 36-yard laser to Stefon Diggs allowing Bass to redeem himself with the walk-off game winner. sealing a 28-25 Bills win with two seconds remaining on the clock.

Buffalo (8-3) will travel to Foxborough next Friday (AEDT) to take on the New England Patriots (6-5) but will be without the services of all-world pass rusher Von Miller, after he left the game in the first half with a knee injury and did not return. In positive news, it appears he may have avoided serious injury, but will still miss time with a knee sprain.

It wasn’t always pretty, with an undisciplined 13 penalties for 86 yards, but the Cowboys overcame a 13-7 halftime deficit to run out comfortable 28-20 home winners over their NFC East rival New York Giants.

While the Cowboys again found success on the ground with the tandem of Ezekiel Elliot (92 rushing yards) and Tony Pollard (63 rushing yards), America’s team still goes as their quarterback goes and Dak shook off two first-half interceptions to complete 15- of-20 passes for 145 yards, two touchdowns and no interceptions in the second half to finish the day with a respectable 91.1 passer rating.

CeeDee Lamb topped the century mark in receiving yards for the second time this season, doing his best Odell Beckham Jr. impersonation by seemingly attempting to reel in every catch one-handed (he reeled in one such attempt and also drew multiple flags for DPIs) on his way to a 106-yard effort.

In another positive sign for Dallas, Michael Gallup looked like he is working his way back to form following a season long lay-off from a ruptured ACL, completing strong contested catches and turning in his best performance for the year with 63 yards.

The Cowboys offense has looked dangerous the last few weeks with a multitude of attacking weapons at Prescott’s disposal as they’ve dominated time of possession and put up points. It’s almost scary to think what this team could be if, as expected, Odell Beckham Jr. signs with Dallas in the coming days.

In a major boost to their Super Bowl aspirations, the defense turned in another rock solid performance as they held Saquon Barkley, who came into the game ranked second in the NFL in rushing, to a paltry 39 yards, while allowing the Giants to score just one touchdown (until a late TD in garbage time) and converted only 27 percent of their third-down opportunities.

Defensive Player of the Year favorite Micah Parsons led the way again with another two sacks, his sixth multi-sack game of the season, and was ably supported by defensive end Dorance Armstrong (career high 8 sacks this season) and linebacker Leighton Vander Esch ( 8 tackles).

Quarterback Daniel Jones failed to deliver when the Giants needed him to in the second half, in yet another sign that he may not have what it takes to be the face of the franchise moving forward.

JEFFERSON DINES OUT ON PATRIOTS D

In a classic case of saving the best for last, the Vikings and Patriots delivered a scintillating shootout filled with twists and turns and its fair share of controversy, in a spectacle worthy of the prime time slot as Minnesota pulled off a fourth-quarter comeback to won 33-26.

In a game where neither team could get much going on the ground (the Vikings rushed for 57 total yards and the Patriots only 45) it was left to the quarterbacks to keep the chains moving and neither disappointed.

In a sign of things to come, both teams marched down the field on their opening drives to tie the game at 7-7.

After Cousins ​​threw an ill-advised ball under pressure into double coverage for the only interception of the night, the Vikings defense held firm in the red zone to keep the Patriots to just a field goal (they were 0-3 on the night but more on that later).

Both teams would trade FGs to start the second quarter before Minnesota orchestrated a 12-play, 70-yard drive that resulted in a Cousins ​​touchdown pass to newly acquired tight end TJ Hockenson. However, crucially Greg Joseph would miss the extra point leaving the score at 16-13.

Just as the Vikings looked set to take a three-point lead into the halftime break, Mac Jones marched the Patriots 70-yards downfield in 10-plays (and just 1:27 of game time), nearly hitting Kendrick Bourne on a fade route for a touchdown, before settling for a Nick Folk field goal to tie the game with six seconds left in the half.

The Patriots second-year quarterback picked up where he left off to start the second half, leading a 10-play, 75-yard drive which culminated in a 37-yard touchdown pass to TE Hunter Henry to take a 23-16 lead.

No more than 13 seconds later the scores were level yet again after Minnesota’s second-year kick-returner Kene Nwangwu hit the afterburners down the sideline to take the kick-off 97 yards to pay dirt.

New England would then drive it down to the Vikings’ 6-yard line only to have a Hunter Henry touchdown catch controversially reversed by the replay official, forcing them to settle for another Nick Folk field goal and a slim 26-23 lead heading into the fourth quarter.

The Vikings would begin the final quarter by kicking a field goal of their own to make scores level again and set the stage for a grandstand finish.

After being forced to punt the ball back to Minnesota on their next possession, the Patriots defense looked like they would return the favor only for the special teams unit to make slight contact with the punter’s kicking leg resulting in a penalty and fresh set of downs for the Vikings.

It proved to be a huge momentum shifter in the game as Cousins ​​made them pay by hitting Justin Jefferson deep and then finding Adam Thielen in the back of the end zone for a 33-26 lead.

After finding Rhamondre Stevenson out of the backfield for a 40-yard catch-and-run to get inside the Vikings 30-yard line, the Patriots would turn it over on downs after a timely third-down sack by Danielle Hunter.

In one final twist, New England (6-5) would get one last opportunity with 53-seconds left on the clock starting from their own 11-yard line, only for Minnesota (9-2) to virtually end the game with another timely sack of Mac Jones.

For as good as Kirk Cousins ​​and the Special Teams unit played, the star of the show in the 33-26 win was undoubtedly Justin Jefferson, who consistently found a way to come down with the ball among multiple Patriots defenders as part of a 139- yard (1 TD) night that saw him pass Randy Moss for most receiving yards in the first three seasons of a career.