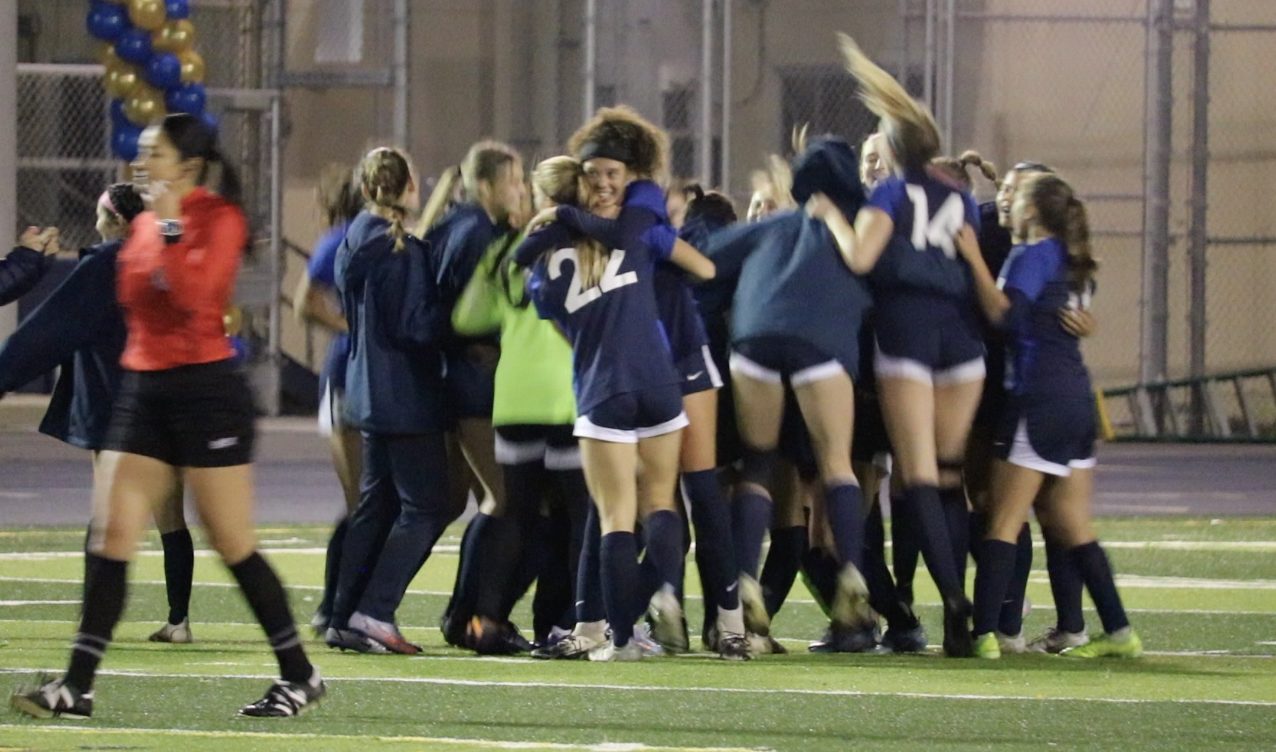 The562’s soccer coverage for the 2022-23 school year is sponsored by Beach Futbol Club.

The562’s coverage of Millikan athletics in the 2022-23 school year is sponsored by Curtis Boyer.

The562’s coverage of Long Beach Poly athletics in the 2022-23 school year is sponsored by JuJu Smith-Schuster and the JuJu Foundation.

Defense wins championships, and the Millikan girls’ soccer program has proven that time and again over the last few years.

Another stolid defensive performance helped Millikan play Long Beach Poly to a 0-0 draw on Tuesday night, and that result all but clinches a fourth Moore League title in the last five years for the Rams.

Millikan (14-3-4, 9-0-1) is now six points clear at the top of the standings, and with the assumed results the Rams will win the championship with room to spare.

“It feels good,” Millikan coach Tino Nunez said. “Credit to this group for understanding what felt like was taken away from them last year.”

The Rams lost their grip on the league title late last year and Wilson ended their streak.

“It’s an experienced group that has lost and won,” Nunez added. “They’ve been there before and they know that feeling. That has been a big motivation for this group this year. They’ve been up for every game and have done the dirty work.”

Millikan’s defense has been impenetrable this season and has not given up a goal in league play while outscoring their opponents 71-0.

“I think especially because we were home it was very important to us that we kept a shutout,” said Millikan goalkeeper Jordan Mendoza, who only needed to make one save for the clean sheet. “The most stressful part was defensive because we know they can score. It was about communication because these games get loud. I think on defense not getting intimidated was really important.”

The Rams limited Poly to only four shots in the game, and only one of them came after halftime.

“Everybody has had to play a part, whether it’s Jordan making a great save or our back line closing stuff down or Mya as a holding (midfielder) winning stuff in the air,” Nunez said of his defense. “But a lot of it starts from our front line. It’s about how we’re pressing together and trapping and supporting each other. It’s a whole team effort. It requires everyone. If you get caught defending yourself you’re in trouble. I credit everyone who has bought in. We know if we do the work defensively it will always give us a chance.”

Millikan started the game on the front foot and was quick to shoot from distance in the first half. The Rams finished with 11 shots and five of them were on target, but Poly goalkeeper Kennedy Justin made the saves she needed for the clean sheet. The last one was in the final minutes as she came off her line to cut out a great scoring opportunity.

Once the 70 minute mark hit, Millikan slowed the game down and played more conservatively in order to secure the draw it needed to all but clinch the title. The Rams were even taking the ball to the corner to run the clock down.

“We realized that the second half was getting too chaotic,” Mendoza said. “If we can’t put chances away it often comes back to bite us. We know how to body, we knew we had the tie, so we decided to keep it safe and not try to score.”

The Rams stormed the field in celebration after the final whistle, and the result meant even more because it was Senior Night at Millikan and the game was just days after the Rams took a trip to Catalina for some team bonding time.

“We’ve been spending a lot of time together as a team and I think that’s helped us,” Millikan’s Audrey Stewart said. “We’ve built a lot of trust. That’s just been growing since the beginning of the season.”