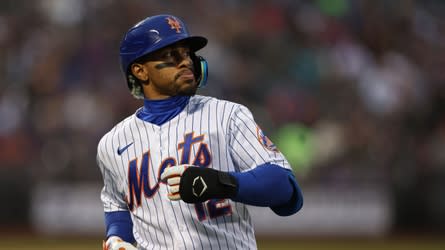 The Mets ’offense could only muster five hits and two runs in their 5-2 loss to the Atlanta Braves on Monday night at Citi Field.

With Robinson Cano DFA’d, the lineup will likely see Jeff McNeil more at second with JD Davis and Eduardo Escobar manning third – Davis is starting at 3B with Escobar hitting from the DH spot. Manager Buck Showalter put out this lineup Monday night, but was not in the dugout as he was suspended prior to the game.

Here are the takeaways

-The Mets had plenty of activity on the bases early against Max Fried. After leaving a couple of runners on in the first, the Mets would break through in the second. After a one-out double by Starling Mars, McNeil would advance him with a sac fly, and Fried would spike a ball past former Met Travis d’Arnaud to allow the outfielder to score on the wild pitch.

– After getting a single in the first inning, Mark Canha launched his first home run as a Met off a Fried fastball to give his team a 2-0 lead.

– Austin Riley got the scoring going for the Braves after leading off the fourth with a solo shot. It was a no-doubter off a Chris Bassitt 1-1 slider that had too much plate.

– Bassitt was cruising through the first four innings, but had an odd fifth. With two outs, Bassitt threw a pitch to Dansby Swanson that had a lot of plate and he thought the inning was done but the umpire called it a ball. Bassitt would walk Swanson and was visibly thrown off, taking a lap behind the pitching rubber to gather himself. He would then hit Ronald Acuna Jr. before Bassitt escaped the inning by getting Matt Olson to weakly hit a low flyball to third base.

– The Braves would take the lead in the sixth. After Riley singled, Ozzie Albies would hit a single through the hole between second and third. The big hit was d’Arnaud who dumped a perfectly-placed pitch over the head of Pete Alonso for a double and tied the game at two. Adam Duvall would hit a fly fly to give Atlanta the lead, 3-2.

Bassitt had another strong start for the Mets. He threw 95 pitches in seven innings, giving up three earned runs, six hits, one walk and eight strike outs.

– The Mets would have a chance to tie the game in the seventh. After McNeil drew a two-out walk, James McCann was hit by a pitch – the team’s 21st this season – and Brandon Nimmo walked to load the bases. However, Canha struck out swinging to end the threat.

–Trevor May‘s struggles continued in his appearance in the eighth. After walking Olson, Albies would hit a one-out single. With two outs, May could not put away Arnaud who lined up a full-count double to left field to score two. The Braves went up 5-2.

The former Mets catcher had a game, going 3-for-4 with three RBI.

-After going 1-2-3 in the bottom of the eighth, the Mets had little answer for Kenley Jansen. Davis led off with a fly out, and after a Mars single, McNeil struck out on a check swing and Dom Smith – pinch hitting for McCann – flied out to end the game.

-The Mets offense only mustered five hits with Canha and Marte getting two each. The team was not clutch either, leaving 13 on base.

The Mets continue their series with the defending World Series champions in a doubleheader Tuesday. The first game will start at 3:10 pm with the second starting right after at 6:40 pm Carlos Carrassco and David Peterson will start but the order has not been confirmed.