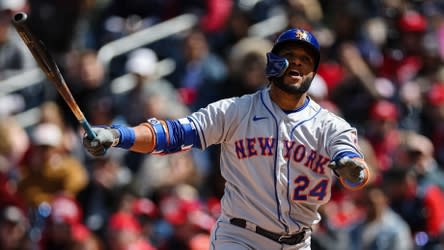 The Mets have designated Robinson Cano for assignment as one of their moves to trim the active roster from 28 to 26 before Monday’s 12 pm deadline, the team announced.

Reliever Yoan Lopez was optioned to Triple-A Syracuse as the other move.

As the roster crunch neared, Cano – who was hitting .195 / .233 / .268 with just one extra-base hit in 43 plate appearances – seemed like the obvious baseball move to make clear one of those spots. And that the Mets actually pulled the trigger on it speaks volumes about their commitment to the on-field product.

Cano’s struggles at the plate were dragging down the lineup when he was in there. On top of his offensive failings, his lack of range at second base and lack of speed made him a tough player to carry.

But demoting Smith (the Mets’ only true backup first baseman, who went 4-for-4 on Sunday), Davis (a key bench bat who can also play third base), Jankowski (whose speed and outfield defense are both important), or Guillorme (the only backup shortstop) would’ve been a bad baseball decision.

By DFA’ing Cano, the Mets have brought about the likely end of a tenure that began with the trade swung by then-GM Brodie Van Wagenen before the 2019 season that brought in Cano and Edwin Diazwith top prospect Jarred Kelenic and others heading to the Seattle Mariners.