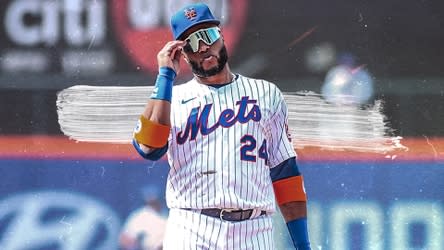 The Mets designated Robinson Cano for assignment on Monday, sending the right message that was also the latest example that they are not messing around.

1. Keep Cano, despite his inability to hit much at all, which included an inability to pull the ball or hit for power. Keep him despite the fact that his failings at the plate were just the tip of the iceberg because of his diminishing range at second base and non-existent speed. Keep him mainly because he was still owed roughly $ 40 million between this season and next.

2. Move on from Cano, knowing that he is a sunk cost at this point. Move on in order to move ahead with Dominic Smith, JD Davis, Luis Guillormeand Travis Jankowskiwhose spots should never have been in danger.

That the Mets thing option No. 2 once again hammers home that their decisions are dictated by the desire to win. Cano wasn’t the best option to help them achieve that goal, so he is gone. It’s that simple.

Is there a chance Cano catches on somewhere else and shows he has something left in the tank? Perhaps. But it wasn’t happening early on with the Mets, where he alternated between flailing at pitches in the dirt and being unable to make solid contact on hittable pitches.

I wrote last week that it was time to end the Cano experiment, arguing that at the very least, the Mets should stop giving him regular playing time immediately. And I noted it could soon be time for the Mets to accept Cano as a sunk cost. It turned out they were ready to do it on Monday.

As I detailed last week, looking at Baseball Savant, Cano’s metrics were so bad that they were dragging him down to an unplayable level. His xwOBA was in the 17th percentile, his average exit velocity was in the 12th percentile, and his chase rate was among the very worst in baseball.

The Mets moving forward with Cano – and without one of the valuable players they would’ve had to option or DFA in order to keep him around – would have meant doing so to the detriment of the team. And they knew it.

As what turned out to be the end of Cano’s Mets tenure neared, lots of people compared his situation to the one the Mets were in with George Foster in 1986, though the money owed to Cano dwarfs what was owed to Foster.

By ’86, Foster was 37 years old and had been with the Mets since 1982. And while he had some decent seasons in Queens, he never resembled the player he was with the Cincinnati Reds. So when push came to shove, after 72 games and 256 plate appearances in ’86, the Mets moved on.

Cano didn’t make it nearly that long with the 2022 Mets. And while his positive PED suspension before last season hastened the end of his time in New York, it was pretty easy to predict that the Mets were making a mistake when they traded for Cano before the 2019 season.

For one, Cano had recently served his first PED suspension. Second, he was entering his age-36 season and was owed tons of money through 2023. Third, dealing for him (and Edwin Diazwho has been terrific since 2020) necessitated trading top prospect Jarred Kelenic to Seattle, something that seemed ridiculous at the time.

That Kelenic hasn’t set the world on fire in parts of two seasons since making his big league debut doesn’t mean he won’t eventually find it. And even if he doesn’t, he was far too valuable to include in a trade for Cano when the Mets were absorbing so much of his salary.

Before the season began, lots of fans wondered just how much rope Cano had. Would he be cut early in spring training? Would he make the roster out of camp? If he made the roster, how much would he play?

Despite the fact that Cano really didn’t deserve to take playing time away from others, the Mets were right to see what he had left. If he even came close to resembling the player whose sweet swing had made him one of the best hitters in baseball, he could’ve contributed even in a more limited role since the Mets had the DH at their disposal.

But Cano looked nothing like the hitter he once was, which was unsurprising since he’s approaching 40 and just lost an entire season to a suspension. It should also be noted that Cano did not express much remorse for that suspension, and never gave a reason why he put himself in the position to be suspended a second time. That was not a good look.

There will be some players in the Mets’ clubhouse who might not be thrilled that Cano was cut, with Francisco Lindor perhaps among them.

But this is a new era for the Mets. And over the last two years, they have made it clear that the thing that matters most is winning. They started to make that apparent when trading for and extending Lindor, made another statement after signing Max Scherzer this offseason to cap a free agent frenzy, and perhaps made the boldest statement on Monday while moving on from Cano.