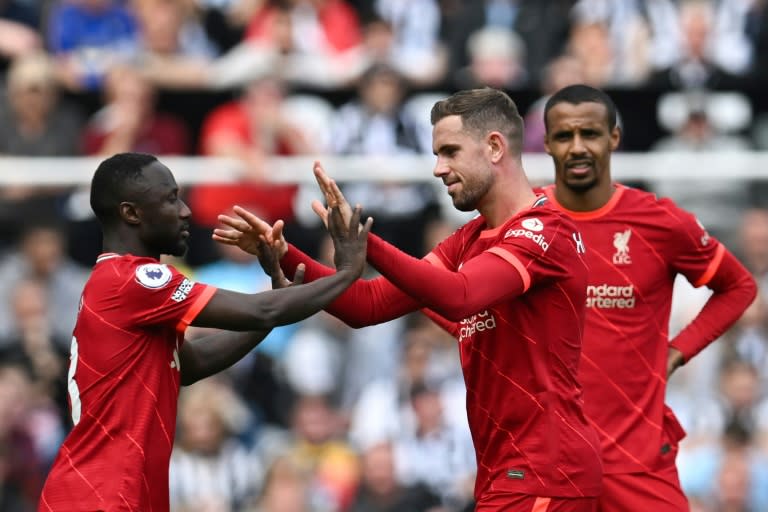 Naby Keita enjoyed a rare day in the spotlight for second-placed Liverpool by scoring the goal that earned a 1-0 Premier League win at Newcastle United and kept the pressure on leaders Manchester City.

A few hours after Liverpool triumphed to go top, City thumped lowly Leeds United 4-0 to regain a one-point advantage with four rounds to play in a thrilling English title chase.

Here, AFP Sport highlights some of the top African performances in European leagues at the weekend:

The match was only 19 minutes old when three players brought into the side by Reds manager Jurgen Klopp combined to break the deadlock. James Milner snapped into a tackle on Fabian Schar and, while Newcastle were furious no free-kick was given, the visitors played on with Diogo Jota finding Keita, who kept his cool to round Martin Dubravka and fire into the unguarded net for quadruple-seeking Liverpool.

The Ivory Coast striker came off the bench to score a stoppage-time winner as Palace won 2-1 at Southampton. Not fit to start because of ankle problems, Zaha secured all three points for the London club when he cleverly rolled away from Southampton center-back Jan Bednarek and let fly with a low shot from the edge of the box that went in via the post for his 12th league goal this season.

The 22-year-old grabbed his first La Liga goal since last December, but that could not prevent his side from suffering a 2-1 loss at Alaves. But the Nigerian and his teammates’ focus will be on their Champions League semi-final second leg against Liverpool on Tuesday, when the ‘Yellow Submarine’ will be looking to overturn a 2-0 deficit.

Napoli’s two African stars were key to Luciano Spalletti’s side thrashing Sassuolo 6-1 and securing Champions League football next season. Senegal captain Koulibaly led a blitz which put Napoli four goals ahead in the first 21 minutes by heading home the opener from a Lorenzo Insigne corner before Nigeria forward Osimhen netted in almost identical fashion to take his Serie A tally to 13 in 24 appearances.

The Cameroon international continued his fine run of form with a late goal in Lyon’s 3-0 win at second-placed Marseille. Toko Ekambi has now scored five goals in as many games.

The Cameroon striker started alongside Robert Lewandowski in a 3-1 defeat at Mainz as newly-crowned Bundesliga champions Bayern suffered a hangover from their title celebrations. A week after being confirmed champions for the 10th consecutive season, Bayern were 2-0 down before Choupo-Moting’s pass found Lewandowski, who slipped his marker and fired in.