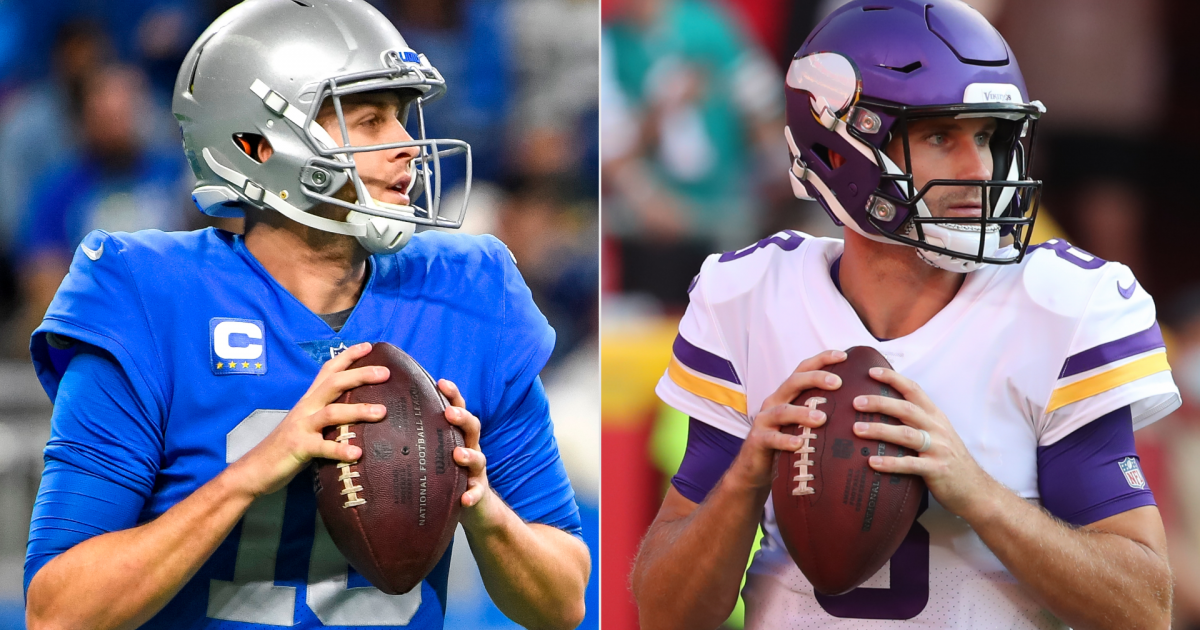 The Lions will try to win their second-straight game on Sunday when they travel to the Twin Cities to play the Vikings at US Bank Stadium (1 pm ET, FOX). Detroit snapped their four-game losing streak against the Vikings last season on Dec. 5 with a 29-27 win.

After losing to the Eagles by three points in Week 1, Detroit picked up a 36-27 win over the Commanders at home. The Lions’ offense was clicking on all cylinders against Washington as Jared Goff completed 20-of-34 passes for 256 yards and four touchdown passes. Two of Goff’s touchdown passes went to Amon-Ra St. Brown, who is having an exciting start to the regular season. St. Brown led both teams with a game-high nine receptions (12 targets) for 116 yards. The Vikings’ defense will have their hands full dealing with St. Brown and the Lions’ dynamic running game.

Meanwhile, the Vikings will look to get back into the win column after losing to the Eagles 24-7 on Monday Night Football. Minnesota’s defense struggled in slowing down Jalen Hurts and Philadelphia’s explosive offense, which was not a surprise. However, what was more concerning in Week 2 was the play of Kirk Cousins. Cousins ​​couldn’t get comfortable on Monday night, completing 58.7 percent of his passes for 221 yards, a touchdown, and three interceptions. Now, he will try to withstand the pressure of Detroit’s defensive line, which features rookie Aidan Hutchison, who had three sacks and two tackles for losses last week.

Below, we’ll give you all the information you need before placing a wager on Lions-Vikings, including the updated odds from Caesars Sportsbook, staff tips, and our prediction for this Week 3 NFC North contest.

The Vikings are almost a touchdown favorite despite getting handled on both sides of the ball on national television in Week 2. However, we saw how the Lions played last season and through the first two games this season. They are definitely worth a look to cover and potentially sprinkle something on the moneyline. The total is settled at 51.5, which makes sense given the talent on both teams’ offenses and the questionable defenses.

The Vikings lead the all-time series over the Lions with an impressive record of 79-40-2. Minnesota has won four out of the past five meetings, with Detroit winning the most recent matchup last season (29-27 on Dec. 5). With Sunday’s game being in Minnesota, it’s a good time to bring up that the last time the Lions won in the Twin Cities was on Oct. 1, 2017 (14-7). Matthew Stafford was the quarterback for Detroit, while Minnesota had Case Keenum under center.

— The Lions are 1-8 against the spread in their past nine games against the Vikings and are 0-9 straight up over that span.

— Additionally, Detroit has not had a ton of success on the road recently with an 0-9-1 record straight up in its past 10 road games.

— Vikings ML is a four-star play on BetQL; however, 96 percent of the money and 67 percent of the tickets like the Lions to pull the upset and win on Sunday.

Take advantage of BetQL’s 3-day free trial and see all of our best bets across all sports, including college football, NFL and MLB!

Three things to watch for

Can Kirk Cousins ​​bounce back after a rough Week 2 performance?

The Vikings need Cousins ​​to shake off his outing from Monday night. Cousins ​​threw three interceptions against the Eagles, but it honestly could’ve been more if Philly’s defensive backs were able to come down with the ball. In nine career games against the Lions, Cousins ​​is completing 74.2 percent of his passes for 2,538 yards, 19 touchdowns, and two interceptions. Even though Cousins’ numbers look good on paper, he has to actually perform well on the field.

Where is Dalvin Cook?

Through two games this season, Cook has yet to score a rushing touchdown. The longest he’s gone without scoring a touchdown is eight weeks (2018 season). Minnesota hopes that situation does not play out this year or they are in serious trouble. Cook was shut down by the Eagles’ defense on Monday night, rushing for 17 yards on six carries. He also had four receptions for 19 yards. Despite his minimal production in the passing game, the Vikings need more from the star running back on Sunday. The good news for him is that Detroit’s defense is giving up 152 rushing yards per game through two weeks. This is a prime bounce-back opportunity for the veteran running back.

Sunday afternoon’s game will be a perfect showcase of two young receivers that play the position in different ways. St. Brown is more of a possession wide receiver but has shown in his short NFL career that he can create explosive plays. The former USC standout has had eight-straight games where he recorded at least eight receptions. Within those eight games, St. Brown has scored a touchdown in six of them. On the other sideline, you have Justin Jefferson, who many believe could legitimately win the NFL MVP after his performance in Week 1 (nine receptions for 184 yards and two touchdowns). It will be fun to see how both defenses try to defend these wide receivers and who will ultimately come out on top.

186. This is the Lions’ rushing yards per game through the first two weeks of the season. Detroit has done a great job of featuring both D’Andre Swift and Jamaal Williams in the running game. Both running backs will need to have a huge game, especially if the Lions want to win on Sunday. Swift already has 200 yards on 20 carries while Williams has 81 yards and has been heavily utilized inside the red zone. Detroit should be able to have some success on the ground with the Vikings’ defense giving up 137 yards per game.

This NFC North matchup might end up being one of the better games during the early window in Week 3. The Lions are not scared and have a feisty defense that will get after the quarterback. Goff has done a good job of not turning over the ball, which will loom large in this game. I expect both running games to have a couple of huge runs. Also, after being shut down by the Eagles, Jefferson should break out of his mini-slump and get a touchdown. It will be a close game, with the Vikings getting the win in the last two minutes of the final frame.

PREDICTION: Minnesota 30, Detroit 27. Detroit covers (+6) and the game goes OVER.