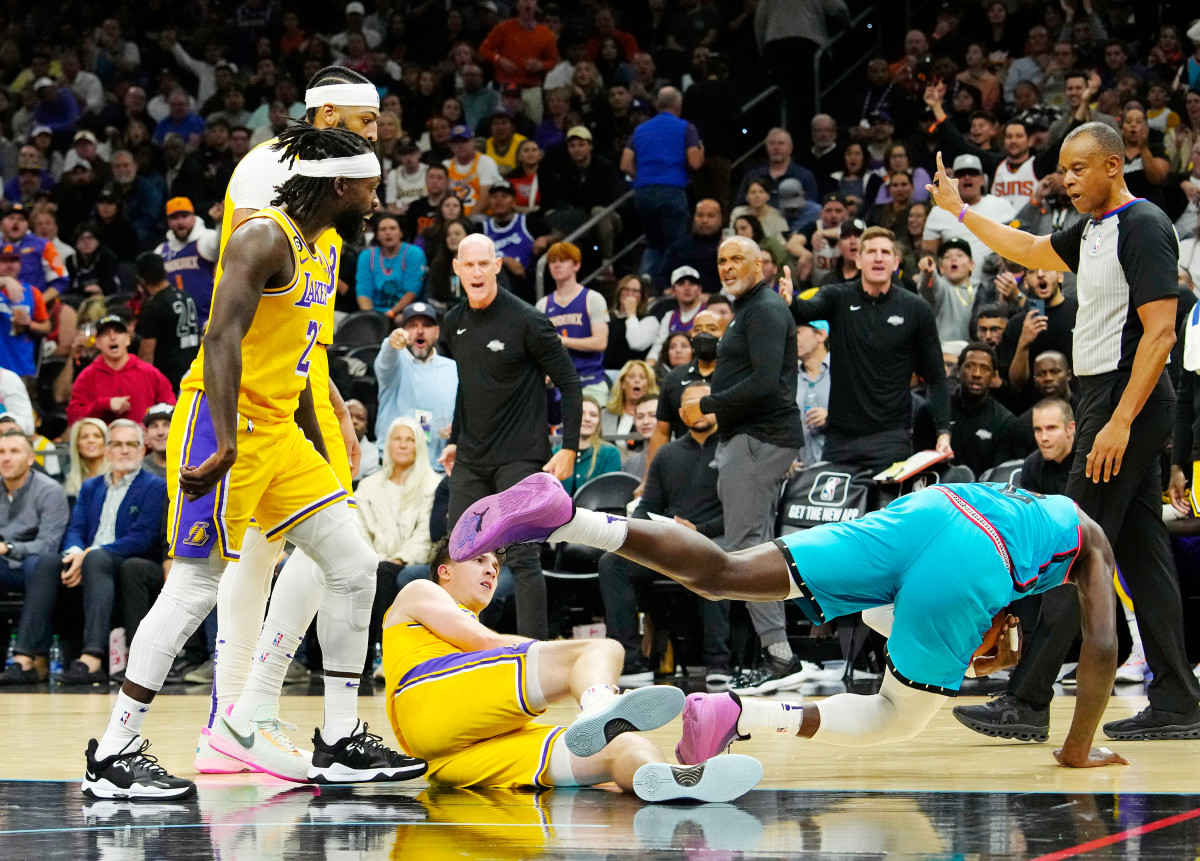 Los Angeles Lakers starting point guard Patrick Beverley has been suspended by the NBA for three games, the league announced in a statement. Pat Bev will thus miss back-to-back contests against the Spurs on Friday and Saturday, as well as next week’s bout with the Indiana Pacers.

Beverley himself predicted he would face some level of punishment for a blatant cheap-shot foul on Phoenix Suns center Deandre Ayton, and acknowledged postgame that he regretted the incident.

The 6’1″ veteran guard said after the fact that he took umbrage with the Phoenix big man for standing over Lakers guard Austin Reaves, who had been knocked to the ground by All-Stars Suns shooting guard Devin Booker while the two battled for a rebound late in an eventual 115-105 Lakers loss. While Ayton stood over Reaves, Beverly ran into him full-bore, shoving the big man to the ground. Lakers and Suns players were suddenly on the verge of exchanging blows. Referees ejected Beverley, gave Ayton a tech, and whistled Booker for a foul.

The league noted in its press release that Beverley’s prior behavior over the years factored into its decision to levy a suspension rather than a simple fine. He actually pulled the same behind-the-back shove play against the Suns two years ago while still with the LA Clippers during the 2021 Western Conference Finals, although that time it was against Chris Paul.

I’m not the first person to suggest this, but this moment could be a blessing in disguise for an LA club that could probably benefit from fewer Patrick Beverley minutes. Yours truly had high hopes for the three-time All-Defensive Teamer heading into the season, presumably acquired by the Lakers in the offseason to be an eventual Russell Westbrook replacement on the Los Angeles roster.

Although Beverley has indeed supplanted Russ as the team’s starting lead guard, Beverley’s production has fallen off a cliff, while Westbrook has thrived since being moved to the bench. That shove was the most memorable thing Beverly has done on a basketball court all year. He’s averaging a career-worst 4.1 points a game on a career-worst 26.6% field goal rate in a pretty generous 27.4 minutes a night. If Beverley can’t provide any offensive firepower anymore, one wonders how much he should actually be in the team’s rotation.

With Beverley unavailable, one wonders if head coach Darvin Ham will opt to start Reaves or Dennis Schröder at point guard. With LeBron James sidelined, Reaves had recently entered the starting lineup at shooting guard while regular starting shooting guard Lonnie Walker was moved up to small forward. James could return as soon as tomorrow, but perhaps now Reaves won’t need to be demoted.

Reaves seems to be the more intriguing and consistent two-way player than Schröder at this point in their respective careers, but Schröder is a proud veteran and may be hoping for the nod, despite having been totally erratic in his three games back in the lineup. after a preseason UCL surgery.

Bobby Marks of ESPN reports that Beverley will be losing $89,655 per contest as a result of sitting out these next three games, for a total of $268,966.