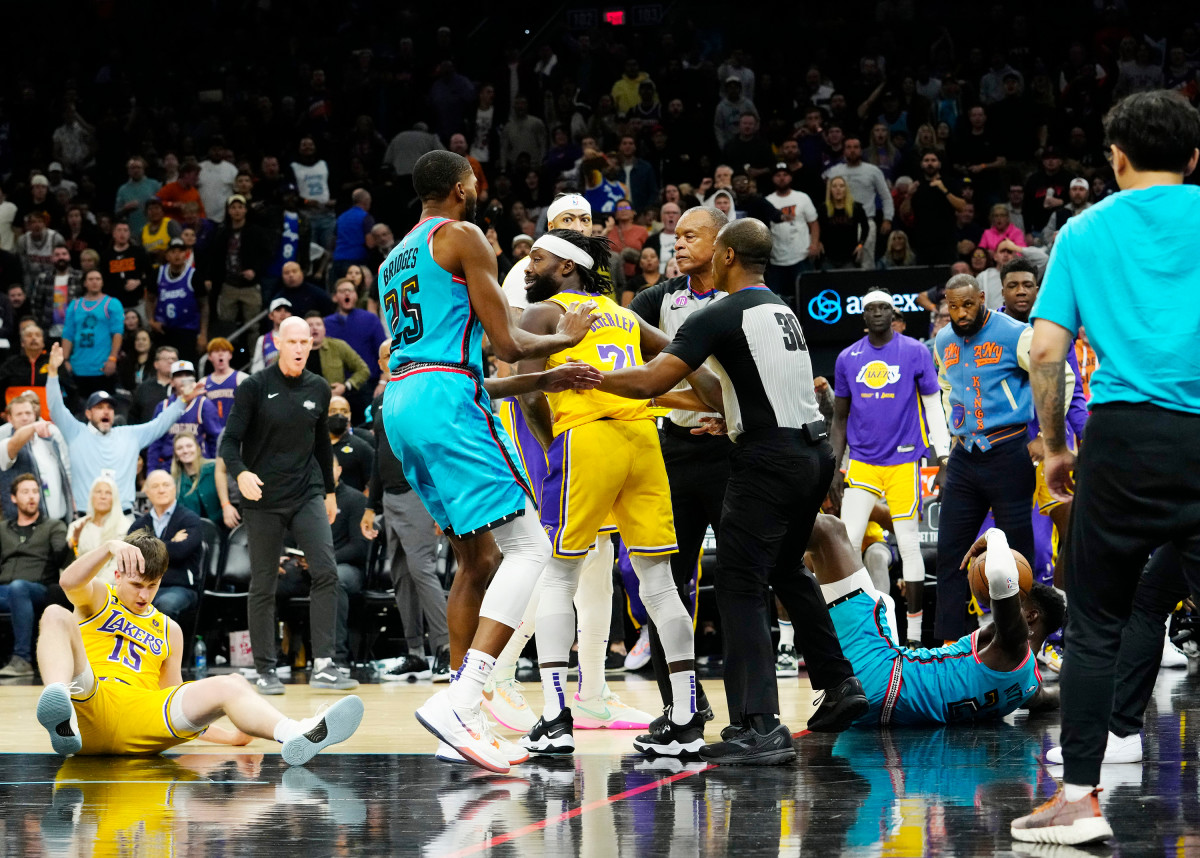 Near the conclusion of your Los Angeles Lakers’ eventual 115-105 road loss to the Phoenix Suns, Lakers shooting guard Austin Reaves was fighting with Devin Booker for rebound positioning. Booker pushed and fouled Reaves, before standing over him and apparently yelling something untoward. Starting LA center Deandre Ayton then stood over Reaves, still on the hardwood.

Patrick Beverley, still almost inexplicably the Lakers’ starting point guard, then opted to punish Ayton for trying to intimidate Reaves by shoving him in the back:

NBA Twitter was thoroughly divided on whether Beverley was in the right to violently shove a guy from behind when his attention was elsewhere and there was a stoppage in play (spoiler alert: he wasn’t).

Hoops head Kenny Beacham seemed to applaud the intensity, albeit while finding it all pretty funny:

FanDuel personality Eddie Gonzalez noted that Patrick Beverley has essentially become a hockey enforcer-like presence for the Lakers. This is fair.

Outside of some rebounds and occasional steals and assists, stirring up his team by riling up the opposition is kind of his main job. This writer is disappointed and thought Beverley had more to give in terms of actual basketball, but it seems like the only thing he gets really excited for is shoving guys in the back while the game action is stopped. Here he is doing the same thing to Chris Paul a few years back:

Anyway, back to Twitter reactions from this latest shove against a Suns player.

Beverley really can’t do a whole lot on a basketball court as an actual player these days, so if he is suspended, it may help clarify Darvin Ham’s rotation.

A surprising number of NBA fans (well, maybe not that surprising, given that this is one of the most violent countries in the world) were… in favor of Beverley’s shove for its “team-building” properties.

The reason this “ultimate teammate” decided to shove Ayton from behind rather than trying to start anything to his face was probably just one of physical savvy. Ayton has 10 inches of height and 70 inches of mass more than the 6’1″, 180-pound reserve point guard Beverley.

Remember: Patrick Beverley himself conceded that the shove was a mistake.

What’s that? You thought Skip was going to offer up a smart and insightful take and not some BS “I don’t condone violence but way to bring the violence dude” nonsense? Do you even hear yourself right now?

Trevor Lane of Lakers Nation was also strangely in favor.

There was some sanity to be found elsewhere, thankfully.

Are the Lakers experiencing buyer’s remorse after having dealt for a broken-down Pat Bev in the summer?

And here are some humorous takes about the whole thing, at that:

Yes, what an… important service he provides.

Ouch but also, it is his specialty.

A fan took to accusing Devin Booker of enacting unsafe behind-the-back shoves as well in his day. And he brought receipts (see above)!