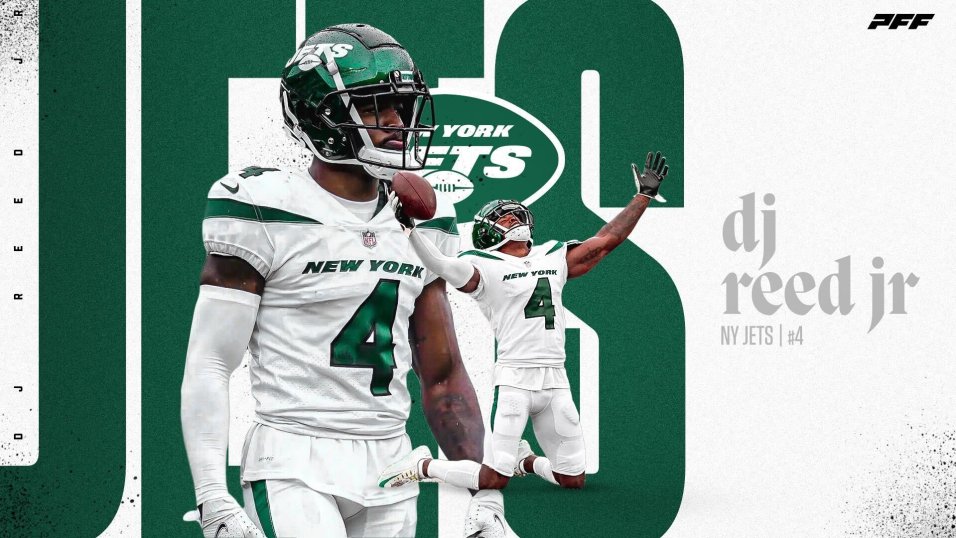 New York Jets head coach Robert Saleh didn’t know what he had in cornerback DJ Reed Jr. the first time around. What he had, and what he has now, is one of the best cornerbacks (and perhaps the most underrated defender) in the NFL.

Drafted by the San Francisco 49ers in the fifth round of the 2018 NFL Draft, Reed was typecast as a slot cornerback and safety by Saleh, then San Francisco’s defensive coordinator.

“It’s crazy,” Reed told PFF on Tuesday. “I came in with Denzel Ward and Jaire Alexander and Mike Hughes. Those dudes are like 5-11 and since I was 5-9, I was labeled as a slot corner even though I played corner in college. It was just interesting. The Niners didn’t think I was an outside corner because of my height, so I just played nickel and safety.”

After two mostly forgettable seasons in San Francisco where the Kansas State product played just 35 total snaps outside compared to 465 reps in the slot and at safety, the 49ers attempted to stash Reed by waiving him with a non-injury designation during training camp in 2020 Their NFC West-rival Seattle Seahawks claimed him and eventually moved him to cornerback. The rest is history.

Reed joined Saleh this offseason when he signed a three-year, $33 million contract with the Jets. Reed, who has a 79.3 coverage grade this season, has played just four snaps all season in the slot and none at free safety, by the way. It’s proven to be one of the smartest free-agent signings of the offseason, as Reed, who’s allowed just 29 catches on 51 targets for 295 yards and no touchdowns with one interception, has combined with rookie Sauce Gardner and slot cornerback Michael Carter II to form the NFL’s highest-graded cornerback corps.

“He’s playing as well as I’ve ever seen him,” an AFC pro scout said. “Having a really good year. Trusting his eyes and playing faster than he has previously.”

Jets cornerbacks, collectively, have earned a 90.0 PFF grade this season, which is 13.2 points higher than the NFL’s next-best unit. With Gardner ranked second among cornerbacks in PFF coverage grade, Reed seventh and Carter 15th, the Jets have a strong case for having the NFL’s best cornerback duo and trio in the NFL this season. Collectively, the three have allowed 84 catches on 145 targets for 847 yards with two touchdowns and five interceptions for a 64.9 passer rating in 2022. Gardner and Reed have let up just 51 catches on 101 targets for 503 yards with one touchdown and three interceptions.

“Shoutout to (Eagles cornerbacks Darius) Slay and (James) Bradberry. That’s a great duo, one of the best if not the best. But I think me and Sauce got that crown right now,” Reed said. “I just think with the way we’re playing, we’re literally shutting teams out, and we’re playing against great receivers. We played against Tyreek (Hill) and (Jaylen) Waddle, played against (Stefon) Diggs and (Gabe) Davis, we played against Ja’Marr Chase and Tee Higgins, and I felt like we held our own against everybody. I would definitely say we’re the best right now with our production and just with what we’ve done with this defense. It’s not just us. It’s a credit to our whole defense, but I definitely feel like we’re the best doing it right now, for sure.”

“That’s just what I played in college,” Reed said. “I’m just comfortable there. When we played the Bills and I had to follow (Stefon) Diggs, so I was playing a little bit left, and to be honest, it is harder to follow a receiver. For me to just be on the right side, it’s easier. I’m more at home. I’m able to go to the left side, but it’s just more comfort and repetition. I’ve played there for a while and I’ve got a lot of reps. It’s something that I don’t really think about when I’m out there.

The Jets know how to play to their strengths, because Gardner is the NFL’s second-highest-rated defender lined up at left cornerback this season, and Carter is the NFL’s fifth-highest-rated defender lined up in the slot. Reed has played just 54 snaps all season on the left side of the field, and 35 of those came in one game when he was primarily shadowing Diggs in a Week 9 win. Diggs caught five passes on 10 targets for 93 yards in the game, but Reed allowed only two catches on four targets for 24 yards to the All-Pro wideout.

Reed absolutely raves about Gardner in the most glowing and detailed scouting report you’ll ever hear.

“Just looking at Sauce, man, I just think literally the sky is the limit,” Reed said. “He’s playing great football right now — probably the best in the National Football League, and he’s not at his best potential. He’s not in his final form yet. His potential is off the charts. Just for him to be a rookie — and first of all, his IQ is really crazy to be a rookie. He understands football. He wants to learn. He’s eager to learn. He’s humble, but at the same time, he’s very confident because he knows he’s a good football player. The things he does on the field, you can’t really teach. Even if he gets beat initially, he has long arms to have late wins with PBUs. He just does a great job. He’s explosive. He gets in and out of his breaks. To be that big and tall, he gets in and out of his breaks really fast. He has good ball skills. He doesn’t panic when the ball is in the air.

“Like, I could keep going on. I’ve never seen a rookie perform like this so fast and so suddenly. The first game, he played great. Usually, it takes rookies a couple of games. It wasn’t like that. It’s pretty crazy. If they did the draft again, he’s probably the No. 1 overall pick. He’s legit.”

When I mentioned that Reed hasn’t let up a touchdown all season, he humbly pointed out that he actually hasn’t allowed a touchdown since Week 3 of the 2021 season, when he gave up two to the Minnesota Vikings — one apiece to Justin Jefferson and Adam Thielen. Reed has played 880 coverage snaps since that game. The cornerback with the next-highest snap count who hasn’t given up a touchdown in that span of time is Darnay Holmes with 376 snaps. Reed understands just how impressive and improbable that is.

“It’s tough, bro. “Playing in the NFL at corner and not giving up a touchdown is tough,” Reed said. “It’s been a while, but it’s just really being detailed and just focusing on my eye discipline, pre-snap, knowing my formation, and really just trusting myself. And you can still get scored on doing all of that. It’s just playing smart football, playing good football.

“Nowadays, you just saw one of the best football players, (Patrick) Surtain, just for example, playing the Raiders. He played against obviously one of the best wide receivers in Davante Adams, and he scored twice. It’s real. Jalen Ramsey scored on. And these are elite players. It’s tough, but it’s not just me. It’s my defense, as well. It’s the D-line. It’s everybody else, as well.”

The Jets are 6-4 on the season and have allowed the second-lowest expected points added per play (EPA) figure on the season so far. The elephant in the room is that New York’s offense, which ranks 28th in EPA per play, has not held up its end of the bargain. Reed spoke to Zach Wilson after the Jets quarterback said he didn’t let down New York’s defense in a 10-3 loss to the New England Patriots in Week 11. And Reed was diplomatic when asked if it was frustrating to have an elite defense with an offense that’s struggling.

“If the offense goes three-and-out, we’re not like, ‘Oh man, they have to get their stuff together.’ We strap on our helmets and we go to work,” Reed said. “We’re gritty. We want to win, obviously, but there’s going to be times when the offense needs to help us out, and there’s going to be times when we help them out. Right now, we’re playing great football, and they’re having their struggles.”

Reed pointed out that the Jets’ defense let up 30 points to the Cleveland Browns in Week 2 before New York’s offense “performed a miracle, practically” to win the game.

“The main thing is that we have to stick together, which we are,” Reed said. “There’s no pointing fingers in our locker room despite what the media claims or nothing. We’re all good. We’re just trying to figure it out still. And the fact that we’re 6-4 and not even playing to our full potential yet as far as offense, defense and special teams, it just shows how dominant we can be.”

The Jets are currently in fourth place in the AFC East despite their record. Their defense should be one of the NFL’s best for a long time.