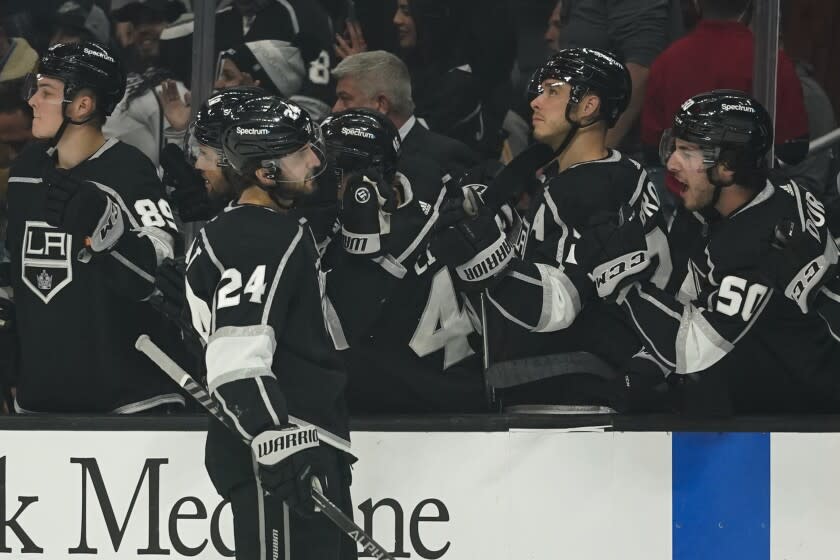 The Kings’ reward for an completing a sometimes-tortured journey back to the Stanley Cup playoffs was a matchup they hope won’t turn out to be a punishment.

Finishing third in the Pacific Division put them up against the explosive Edmonton Oilers, whose top two centers have won the NHL scoring championship in five of the last six seasons. Connor McDavid recently won his second straight title and fourth overall by scoring a ridiculous 123 points; teammate Leon Draisaitl, the 2020 scoring champion, ranked fourth this season with 110 points.

“Arguably, we’re going against the best 1-2 punch,” Kings center Anze Kopitar said Monday before they opened their best-of-seven series amid the buzz of boisterous fans around the city and inside Rogers Place.

Kopitar and Phillip Danault are no slouches themselves when it comes to providing the strength up the middle that winning teams need. Either of them could have been labeled the Kings’ No. 1 center this season, especially with Danault producing a career-best 27 goals. “Most nights he was our best player, really,” Kopitar said.

Winning those matchups at center will go a long way toward determining the winner of this series.

As the team with the better record, the Oilers have home-ice advantage and the last line change in the first two games and, if necessary, the fifth and seventh games. If Oilers coach Jay Woodcroft wants to pit the speedy McDavid and wingers Evander Kane and Jesse Puljujarvi against Kopitar, Andreas Athanasiou and Adrian Kempe, he can get that matchup at home. If he sees an edge to match Draisaitl, Zach Hyman and Kailer Yamamoto against Danault, Trevor Moore and Viktor Arvidsson, he can do that or use them against the Kopitar line.

Woodcroft, who was an assistant to Kings coach Todd McLellan when McLellan coached in San Jose and Edmonton, said he is not strict about sticking to matchups. That approach is interesting – and it has been successful for the Oilers, who went 26-9-3 after Woodcroft replaced Dave Tippett in February and finished five points ahead of the Kings.

Woodcroft likes to be unpredictable, often deploying seven defensemen and 11 forwards – like he did Monday – instead of the standard six defensemen and 12 forwards. That creates extra ice time for some of those 11 forwards, and if those minutes go to double shifts for McDavid and Draisaitl, that makes perfect sense.

“I think there are some moments in games where you specifically want to see certain things. I would never want to let another team’s bench dictate who I put on the ice, especially when you have some of the players that we have. So I like being flexible, ”Woodcroft said before the game. “I think we have a lot of really good players. I feel comfortable with them on the ice against anybody.

“I do not want to be a prisoner to something that was decided beforehand in terms of matchups. I try and use the real time information that the players give us. ”

Danault’s defensive credentials are well established but asking him to focus on McDavid and Draisaitl could leave him fewer opportunities offensively. The Kings, who ranked 20th in goals per game this season at an average of 2.87, can not afford to lose any source of offense. Kopitar led the Kings in scoring with 67 points, a total McDavid could probably get in a good month. The Oilers averaged 3.48 goals per game.

Danault faced McDavid nine times last season, when COVID concerns led the NHL to temporarily realign and create an all-Canada division. Danault then was in the last season of his contract with the Montreal Canadiens. “Why not a couple more times?” he said of matching up against McDavid.

“Obviously you do not want to change anything too much, but there is a little sacrifice for sure. You’ve got to be more smart and more alert. A little sharper on the ice. ”

McLellan believes – or at least hopes – Kopitar and Danault are up to the task of containing McDavid and Draisaitl. “Kopi’s won a couple Cups. Phil has been to the finals as recent as last year. They both get it, and what the hell does that mean? ” McLellan said a few days ago. “They get the game. They get game management. They get situations. It’s not just their skills. Their brain to understand what’s going on around them and to anticipate is maybe their best skill. “

Kopitar said the Kings will have to be aware of factors beyond those two matchups, and he’s right. They must stay out of the penalty box to avoid unleashing the Oilers ‘potent power play, and the Kings’ own power play, which ranked 27th with a 16.1% success rate, will have to contribute to make this series competitive. They began the series without winger Viktor Arvidsson, who left practice on Saturday with what McLellan called a personal issue. Alex Iafallo moved alongside Danault and Trevor Moore.

The Kings made a lot of progress this season, building depth, credibility and a sense of belief. They achieved their goal of making the playoffs, but seriously competing for the Cup might be a year or two off.

“It’s nice, but we’re not going to look at this as an accomplishment,” Kopitar said. “We’re here to do some damage and win hockey games.”