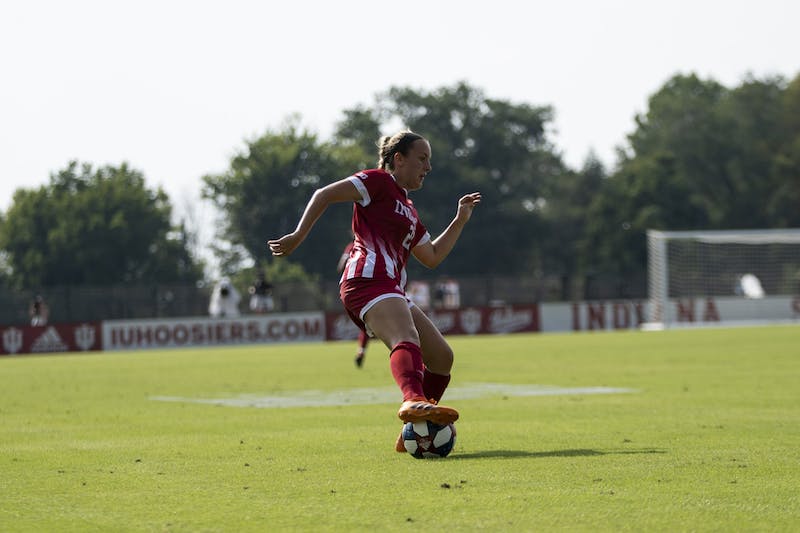 For the first time this season, Indiana women’s soccer conceded a goal and lost a game, losing 0-3 on the road to Minnesota. Despite the loss, the Hoosiers broke the program record with 788 consecutive shutout minutes before giving up a point.

Minnesota scored all three goals within ten minutes of each other during the second half, similar to Indiana’s first win of the season against Indiana State University. Dating back to last season, Indiana has not scored in five straight conference matches.

After the first half, it appeared the game might end in another scoreless draw after both teams combined for only six total shots, but Minnesota came alive in the second half. The Golden Gophers were responsible for all six shots in the second 45 minutes, and half of them found the back of the net. Minnesota finished with 10 shots compared to Indiana’s two.

Indiana’s impressive defensive streak ended after the Minnesota graduate defender Gabbie Cesarone’s header clipped the bottom of the crossbar on a well-worked corner to break the deadlock in the 67th minute.

The second and third goals for Minnesota came in an 85-second span. Minnesota senior forward Izzy Brown possessed the ball on the right side and fired a shot over the leaping attempt of Indiana sophomore goalkeeper Jamie Gerstenberg to double the lead with under 16 minutes left in the match.

Things got even worse for the Hoosiers less than a minute and a half later, considering the next shot banked off of Gerstenberg’s back after the Minnesota junior forward Christa Van Loon’s shot hit the inside of the post. The scampering Indiana goalkeeper couldn’t help but watch it trickle into the net, despite her best efforts. Van Loon finished with a goal and an assist on the night.

With the defense finally breaking for the first time this season, Indiana’s offensive woes bring up major questions. The Hoosiers have only scored in one of sixteen halves played against DI schools in the 2022 campaign.

Indiana’s best chance Thursday night came in the 21st minute, when senior defender Megan Wampler took the free kick from a promising position and fired a shot on goal. Her shot fell straight into the hands of Minnesota goalkeeper Megan Plaschko, marking one of only two saves on the night for the Gopher goalie.

Indiana is now 2-1-6 on the season, sitting on just one point in conference play through two matches. Next up for the Hoosiers is another road match — a date with Wisconsin in Madison, Wisconsin on Sunday. The Badgers are the only Big Ten team that is a perfect 2-0-0 to start conference play. Kickoff from McClimon Field is scheduled for 2 pm

Follow reporters Emma Pawlitz (@emmapawlitz) and Austin Platt (@AustinPlatter) for updates throughout the game and the rest of the Indiana women’s soccer season.