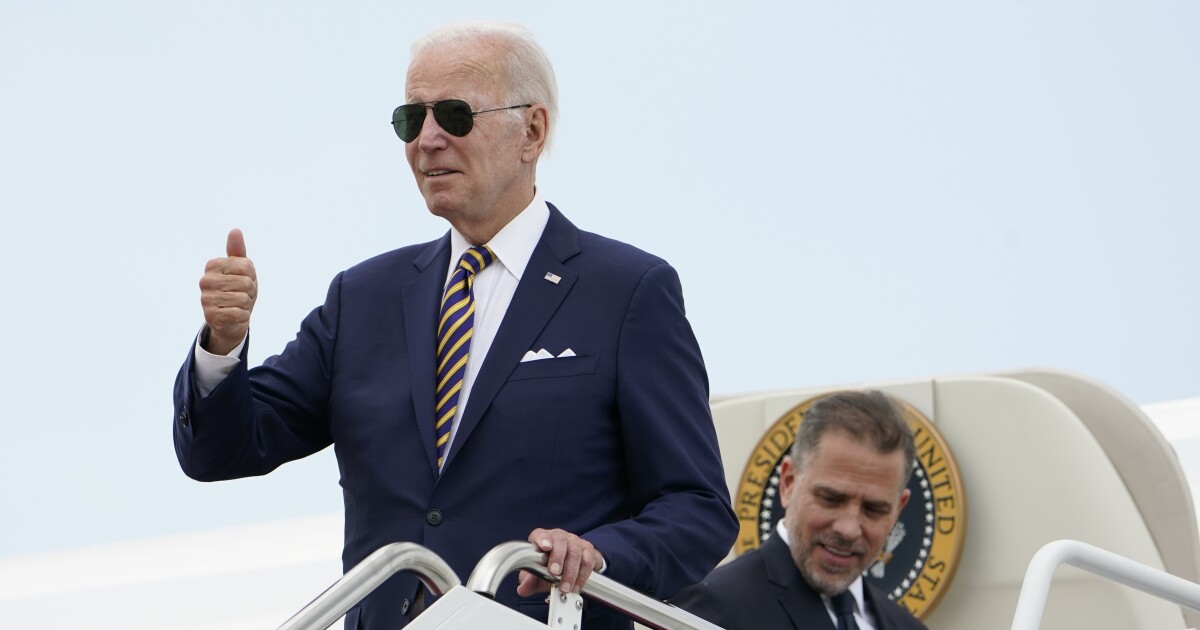 Rep. James Comer (R-KY), the ranking member on the House Oversight and Reform Committee, sent letters to Treasury Secretary Janet Yellen in May, June, and September and argued the Treasury Department continued to stonewall his efforts to get answers on Hunter Biden’s suspicious financial transactions linked to China and elsewhere.

Comer’s newest letter provided granular details about Hunter’s efforts to work out deals with China’s CEFC China Energy, and the Washington Examiner can confirm his laptop hard drive is full of evidence about these efforts.

“Committee Republicans seek this information to determine the extent of President Biden’s participation in these plans to sell America’s interests to China, a foreign adversary,” Comer told Yellen in a letter this week. “Please produce all suspicious activity reports connected to China, including the CEFC venture contemplated by the maps and presentation provided herein describing a plan to sell America’s energy independence to China.”

The House GOP included excerpts from a December 2017 business presentation emailed to Hunter by his assistant, JiaQi Bao, who reportedly previously worked for the Chinese government’s National Development and Reform Commission and a Communist Party-linked investment firm before working with Hunter through his Hudson West business

The Washington Examiner’s laptop review shows dozens of communications between Bao and Hunter. The Washington Examiner commissioned Konstantinos “Gus” Dimitrelos to conduct a full forensic examination of the laptop, and he concluded that “the data contained on the hard drive is authentic.”

Comer zeroed in on the sale of American natural resources, namely natural gas, to China. The Republicans included the title page, translated from Mandarin, which was titled “Overview of the US Natural Gas Industry Chain.” The House GOP letter also included other excerpts from the presentation, including a “Map of Shale Gas Producing Areas in the 48 States of the Continental United States” and a “Map of US Natural Gas Production Areas and State Capitals 2016.”

“These maps, along with a sophisticated analysis written in the Chinese language, are part of a larger presentation emailed to Hunter Biden and show the carving up of the United States based on natural gas reserves,” Comer wrote. “The emails that accompany the transmitted maps reveal a plan to sell American natural gas reserves to China via the same corporate entity branded on the presentation — Hudson West — set up by Hunter Biden with officials from the Chinese company.”

Hunter’s laptop contains dozens of other emails and documents related to this energy venture and other efforts to work out deals with CEFC and Chinese businessmen. It is believed that these dealings are being scrutinized by the Justice Department.

“Documents obtained by Committee Republicans show that the Biden family received millions of dollars from a Chinese business closely affiliated with the Chinese Communist Party, and therefore the Chinese government, to sell American natural gas to China,” Comer told Yellen.

Comer also included a copy of a wire transfer order from Hunter and his CEFC business partner Gongwen Dong to a Mississippi law firm in January 2018, with Hudson West sending $14,351.88 to the US law firm related to the Chinese business plan.

A November 2017 email from Hunter to Gongwen, which was meant to be forwarded to CEFC Chairman Ye Jianming, was also included by Comer, and it provided insight into the younger Biden’s business efforts. CEFC ended up funneling millions of dollars to Hunter Biden-linked businesses.

“I look forward to seeing you at home in New York next week. I have much to report regarding our partnership here in the United States. … I hope that you have received the information I sent regarding the LNG opportunities in the state of Louisiana,” Hunter Biden wrote, adding, “The proposal I have shared with you has the added benefit of being good for both the United States and China simultaneously.”

Ye has since disappeared in China after state media linked him to a corruption case in 2018, which led CEFC to go bankrupt.

Ye’s top deputy, Patrick Ho, was sentenced to three years in prison in 2019 for violating the Foreign Corrupt Practices Act. Ho was deported to Hong Kong in June 2021.

Comer pointed out that Hunter referred to Ho as the “f***ing spy chief of China” in a 47-minute audio recording dated May 2018, found on a copy of his laptop.

The Republican also included an email from Hunter arranging office space for the shared effort between Hudson West and CEFC. Hunter sent a September 2017 email stating that his father Joe and uncle James were his business partners, providing his father’s cellphone number.

“According to additional information provided by a whistleblower, Joe Biden was involved with this arrangement as a business partner, and documents reveal he even had office space to work on the deal,” Comer also told Yellen.

The Republican included a May 2017 WhatsApp message provided to the committee by a “whistleblower.” In it, Hunter’s business associate James Gilliar wrote, “Don’t mention Joe being involved, it’s only when u are face to face, I know u know that but they are paranoid.” The other person wrote back, “OK they should be paranoid about things.” Gilliar replied, “For real.”

The other associate is identifiable as Tony Bobulinski, a Navy veteran and former Hunter business partner.

The message is part of a trove of hundreds of documents from Bobulinski obtained by the Washington Examinerincluding dozens of texts, emails, letters, and business proposals.

Bobulinski spoke at a press conference just before the final presidential debate between then-candidate Joe Biden and former President Donald Trump in October 2020, where he said it was “false” when Joe Biden said he never discussed business with Hunter, saying he was introduced to Joe by Hunter in May 2017. Bobulinski said he “discussed the Bidens’ history and the Biden family’s business plans with the Chinese, with whom he was plainly familiar, at least at a high level,” during that hourlong discussion.

Biden’s campaign denied this at the time.

CLICK HERE TO READ MORE FROM THE WASHINGTON EXAMINER

“We request all SARs from Biden family transactions, including those involving President Biden, related to transactions with Chinese entities,” Comer told Yellen. “We are concerned that the President may have compromised national security in his dealings with the country most adverse to US interests – China.”