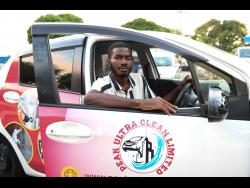 In high school, Javon Smith’s friends nicknamed him ‘Merchant’ because of his penchant for sales.

As he grew older, Smith sought job stability and took on a 9-5 job as an information systems manager.

That entrepreneurial spirit fueled his interest in car detailing on the weekend with his cousin and he soon spotted a business opportunity in a mobile car wash.

The 31-year-old pursued that as a full-time option as he assessed that the market was largely underserved.

Smith was introduced to an engineer in his community who gave him the car, equipped with all the trappings for the mobile car wash, with the understanding that he would reimburse him as the business thrived.

However, three months into the operation, he was already having second thoughts.

“The first month it was okay, because your friends call you and say, ‘Come wash a car! Come do this for me!’ and you’re just like, ‘That’s not bad’, but then you realize it’s not all roses,” he told The Gleaner.

“We have some slow weeks and slow days and you wash one car for the day and then you go home and you sit there and you’re like, ‘How do you improve this?’ You find yourself just spending on gas, going home, and sitting there again,” Smith added.

During one of those slow days, Smith was on the verge of pulling the plug on his fledgling car wash and sanitation service company, Peak Ultra Clean Limited, and returning to his 9-5 job. He decided to vent to his Twitter followers just over a week ago.

“I need a job. Honestly trying to hustle with this mobile car wash but this is a no-go right now. Anyone know anyone/anywhere hiring?” he tweeted.

But then the unexpected happened.

Twitter followers rallied to help save his company, and Smith was overwhelmed with gratitude.

“I saw it being retweeted, and then I realized it’s not stopping almost an hour later,” he said excitedly.

Smith said he started receiving bookings from people all over Jamaica, and other entrepreneurs and marketers started sharing advice on how to improve his company. He is still in disbelief of the impact of that one tweet.

“It was new to me, because if I get one retweet for the day, that’s a lot. So when I saw this going off, I was like, is Twitter broken?” he said.

Now, Smith is booked and busy and is conceptualising new ways to further capitalize on his newfound popularity. He has already expanded his services to include cleaning and sanitation for factories, offices, furniture, and residences.

But he has bigger plans.

“My ultimate vision would be to get an auto spa together, but that’s gonna take some time and resources,” he said.

“One of the challenges with a lot of people is that they are afraid of putting themselves out there. One of the things that I always tell people is that ‘closed mouths don’t ever get fed’, and if you’re passionate about something, whether that’s a business, or project, or an initiative, it’s important to ask for help and put it out there in the universe,” he said in a gleaner interview

The digital media expert said it was important to recall how many small businesses struggled to stay afloat during the coronavirus pandemic which put the skids on commerce over the last two years.

“That young man decided instead of just keeping it to himself, come to a platform where people are accessing every day, regular people who drive a car as well as who would use his service, and just to make it known,” he said.