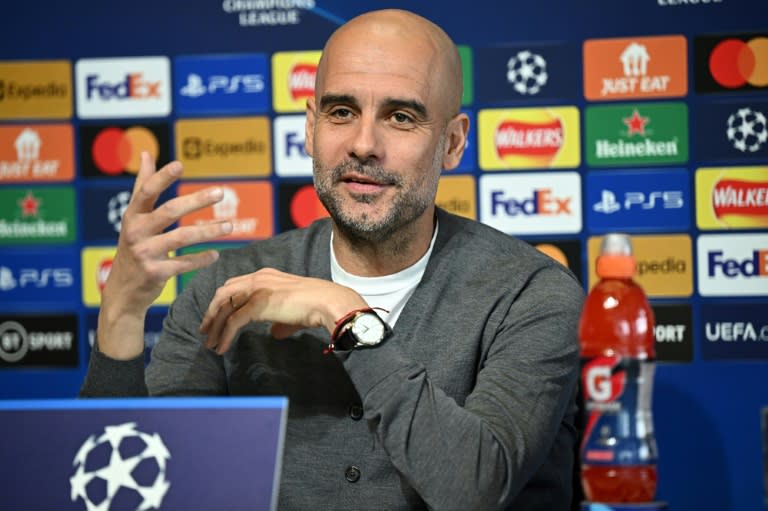 Pep Guardiola has urged his Manchester City stars to show their “personality” as the Spaniard plots yet another successful visit to Real Madrid in Wednesday’s Champions League semi-final second leg.

Guardiola’s side head to Madrid with a slender 4-3 advantage after last week’s thrilling first leg at the Etihad Stadium.

With a place in the Champions League final at stake, Guardiola can take comfort from his impressive record in Real’s intimidating Bernabeu Stadium.

Many star-studded teams have folded when confronted by a European night under the lights in one of the sport’s most hallowed cathedrals.

But Guardiola has never been cowed by the prospect of facing Real on their own turf, winning six times and losing just once in nine visits with City, Barcelona and Bayern Munich.

Guardiola’s Barcelona marked his first game as a visiting boss in the Bernabeu with a 6-2 demolition of Real in 2009.

He also masterminded a 2-0 Champions League semi-final first leg win at Real in 2011 that propelled Lionel Messi and company towards the second of their two Champions League titles during his reign.

Messi memorably scored a superb solo goal in that encounter and Guardiola would dearly love a similar contribution from one of City’s array of attacking talents.

City have already won at the Bernabeu in the Guardiola era, securing a 2-1 triumph in the Champions League last 16 first leg two years ago on route to eliminating the Spanish club.

Overall, Guardiola has won 12 of his 20 managerial meetings with Real at home and away.

But Guardiola did suffer a Champions League semi-final exit against Real in 2014 when his Bayern Munich were crushed 5-0 on aggregate by Los Blancos.

And, fuelled by Karim Benzema’s incredible goal blitz, Real have already staged two dramatic comebacks at the Bernabeu to knock out Paris Saint Germain and Chelsea in the previous two rounds.

While City were clearly the better side in the first leg against Real last week, they couldn’t deliver the knockout blow due to a combination of poor finishing and sloppy defending.

With that in mind, Guardiola has no intention of underestimating Carlo Ancelotti’s team, saying: “I’ve lost and won against them. You play hundreds of times against a rival, you win and lose and none of that (past history) comes into it.

“The talent they have, the only way to beat them is to be better.”

Given the 51-year-old’s superstitious leanings, Guardiola might have been disappointed to discover City were unable to stay in his favorite hotel ahead of the second leg.

Guardiola likes to return to hotels he considers to have been lucky and City stayed in the Four Seasons for their quarter-final against Atletico Madrid last month.

However, they could not secure enough rooms for their squad and staff at the Four Seasons this time, so they had to switch to the nearby Mandarin Oriental Ritz.

“To win this competition, in my little experience, you have to overcome the situations that arise and you have to perform very well in two games,” Guardiola said.

“It’s a good test for us. We have to show our personality in the game. We will play to win.”

City are embroiled in a tense Premier League title race with Liverpool, but the Champions League is Guardiola’s holy grail.

“We are going to play in a great stadium against a great team. Real are one of the greatest teams in history, so you can feel how much of a challenge it is,” Gundogan said.

“It’s huge for us and for the club. We want to get to the final again, like last year.”