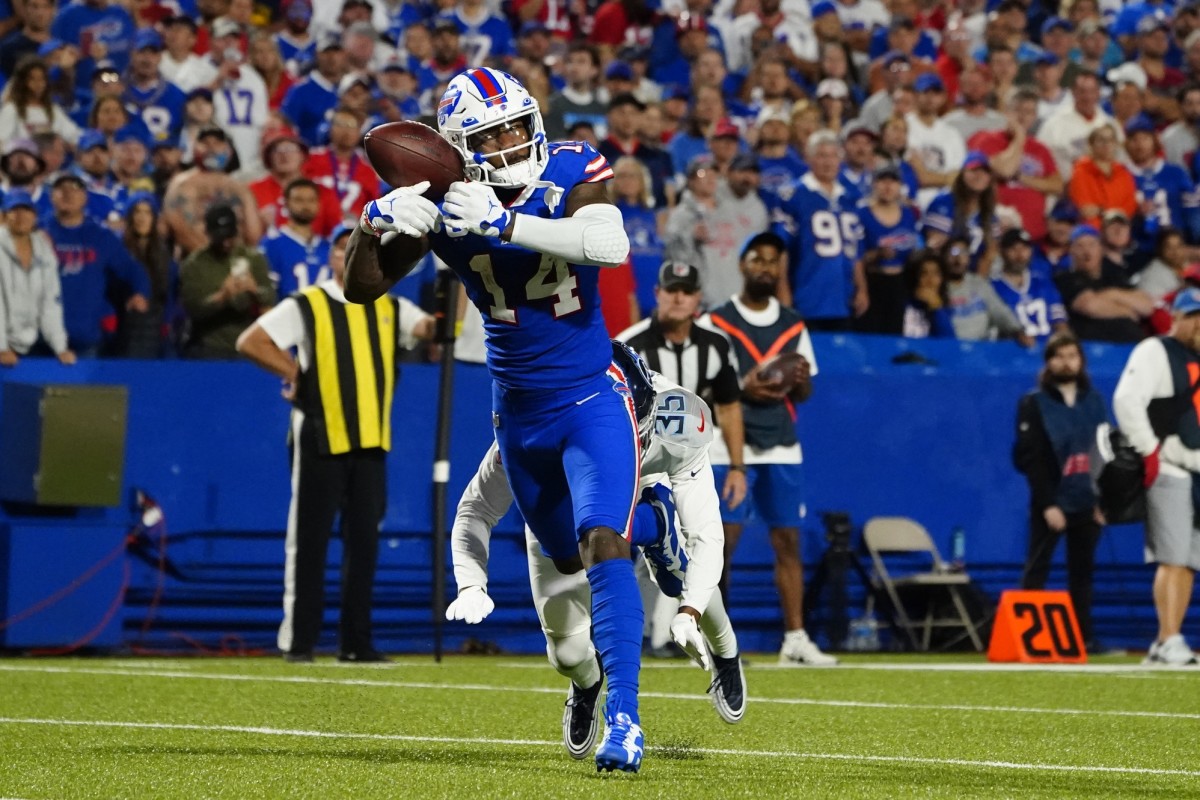 Week 2 of the 2022 NFL season wrapped up with a unique Monday night doubleheader where two games overlapped, an experiment we would certainly love to see again.

And we say that even though both games were pretty much duds because of the way the Buffalo Bills and Philadelphia Eagles handled the Tennessee Titans and Minnesota Vikings, respectively.

From a Dolphins standpoint, the Buffalo-Tennessee provided another reminder as to why so many analysts have predicted the Bills to win the Super Bowl in 2022 — in case their kickoff game handling of the defending champion Rams hadn’t been enough.

This truly is a scary team because Buffalo is so good on both sides of the ball.

While outscoring the defending champions and the defending AFC No. 1 seed by a combined score of 72-17, the only thing that hasn’t gone right for the Bills has been keeping everybody healthy.

Buffalo blew out Tennessee without emerging wide receiver Gabriel Davis and starting defensive tackle Ed Oliver, and then lost starting DBs Dane Jackson to his scary-looking neck injury that resulted in him being taken to the hospital before star safety Micah Hyde also left the game with an injury.

While Jackson clearly won’t play in the Bills-Dolphins showdown at Hard Rock Stadium on Sunday, the status of the other three bears will be watched throughout the week.

One last thing on the Bills’ dominating performance Monday night, two players who stood out on defense (among many) were guys with clear Dolphins connections.

One was former Dolphins defensive tackle Jordan Phillips, who had one of those games that made you see why Miami took him in the second round in that 2015 NFL draft although his tendency to also disappear is why he’s changed teams three times in eight seasons.

The other was linebacker Tremaine Edmunds, the son of the only Dolphins tight end ever selected to the Pro Bowl, Ferrell Edmunds (and the brother of Steelers safety Terrell Edmunds). The 16th overall selection in the 2018 draft, Edmunds was everywhere with a sack, two tackles for loss and a pass defense that resulted in Jordan Poyer’s third-quarter interception.

While the attention in the second game of Monday’s doubleheader should be on Eagles QB (and former Tua Tagovailoa Alabama teammate) Jalen Hurts, the focus here is on the Vikings because they’re coming up on the Dolphins schedule — Oct. 16 at Hard Rock Stadium.

And by the looks of it, it’s the same old Vikings, who went from good to bad like few teams in the NFL.

Minnesota looked downright scary in its season-opening dismantling of Aaron Rodgers and the Green Bay Packers but couldn’t reach 300 yards of offense against the Eagles, star wide receiver Justin Jefferson was held to 48 yards and they couldn’t contain Hurts and the Philadelphia offense.

Bottom line here as it pertains to the Dolphins, we have no idea which Vikings team will show up at Hard Rock Stadium in about a month.

Just caught a Twitter poll asking which of the seven winless NFL teams was the most surprising, and immediately thought that it was impossible not to pick the Cincinnati Bengals, particularly considering they faced the Dallas Cowboys in Week 2 without Dak Prescott.

The Bengals, who the Dolphins will face a week from Thursday (Sept. 29), have two major problems at the moment, including the obvious one of their offensive line being just as bad as it was last year despite the offseason acquisitions of four new starters, including former Cowboys tackle La’el Collins and former Dolphins center Ted Karras.

The other was the ability to make a simple play late in a game.

It’s not like Cincinnati got blown out by either the Steelers in Week 1 or the Cowboys and the Bengals easily could be 2-0 if they simply could have managed an extra point at the end of regulation in the opener and been able to convert to put together a field goal drive after getting the ball with 2:13 left at Dallas.

Cincinnati not only failed to get a field goal at Dallas, it went three-and-out and gave the Cowboys time to put together their own field goal drive.

So far, Joe Burrow hasn’t been able to work the same kind of magic he did in 2021, but there’s still time for the Bengals to turn things around.

NOT THE SAME OLD JETS?

The New York Jets sure looked like they were headed for another long season the way they looked in their opener against Baltimore, but that crazy comeback win at Cleveland could prove some kind of catalyst to a turnaround in 2022.

Maybe. Or maybe not.

Either way, it wasn’t the type of win we often see from the Jets and was on par with the comebacks engineered by the Dolphins and the Arizona Cardinals at Las Vegas.

When Cleveland missed an extra point after going up 30-17, nobody in his right mind would have thought it would make a difference considering there was only 1:55 left and the Jets were out of timeouts.

But the Browns then busted a coverage to give up a 66-yard touchdown pass from Joe Flacco to Corey Davis and then flubbed the ensuing onside kick to set the stage for Flacco’s game-winning touchdown pass to rookie first-round pick Garrett Wilson.

It’s worth noting that Cleveland’s own comeback attempt ended when old friend Jacoby Brissett, who otherwise had a very solid performance, was picked off by safety Ashtyn Davis at the Jets 36 with 6 seconds left.

Back to Flacco, it’ll be interesting to see whether he remains in the starting lineup once 2021 second overall pick Zach Wilson returns from his knee injury. While he did have a lot of garbage time yards in the opener, Flacco threw for more than 300 yards in each of the first two games and had a 110.7 passer rating against Cleveland.

— Sure looks like it won’t be the same Chargers the Dolphins face in December in Los Angeles because head coach Brandon Staley sure seems to have let go of his let-it-rip attitude when it comes to going for it on fourth down . He’s actually gone to the other extreme almost, punting on two fourth-and-short situations against Kansas City in the Thursday night game. We’ll have to see whether the trend continues over the next several weeks.

— Speaking of a team with a different look, former Dolphins interim head coach Dan Campbell looks like he might be on to something with his team. In particular, the Lions offense (which Miami will see Nov. 6) looks legit thanks to a really good offensive line, RB D’Andre Swift and star WR Amon-Ra St. Brown.

— The Pittsburgh Steelers missed linebacker TJ Watt during their loss to New England in Week 2, but their biggest problem remains the offense. And quarterback Mitchell Trubisky isn’t exactly lighting it up, which raises the question as to whether he’ll still be in the lineup when the Steelers come to Hard Rock Stadium on Oct. 23 or the team will have turned to rookie first-rounder Kenny Pickett by then.

— We wrap up with the 49ers, a team that Dolphins fans need to monitor because Miami holds San Francisco’s first-round pick in 2023 and, at the risk of being insensitive, the season-ending injury to QB Trey Lance was bad news in that sense. Let’s be very honest, while Lance might represent the future at quarterback for the 49ers, they’re way more likely to win more games with Jimmy Garoppolo back in the lineup than they would have been with Lance.